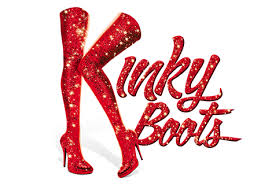 In KINKY BOOTS, Charlie Price has reluctantly inherited his father’s shoe factory, which is on the verge of bankruptcy. Trying to live up to his father’s legacy and save his family business, Charlie finds inspiration in the form of Lola. A fabulous entertainer in need of some sturdy stilettos, Lola turns out to be the one person who can help Charlie become the man he’s meant to be. As they work to turn the factory around, this unlikely pair finds that they have more in common than they ever dreamed possible… and discovers that when you change your mind about someone, you can change your whole world.

Inspired by a true story and based on the Miramax motion picture written by Geoff Deane and Tim Firth, KINKY BOOTS features a warm and witty book by Harvey Fierstein and a richly diverse musical score from Cyndi Lauper, in her stunning theatrical debut. Jerry Mitchell has crafted a production bound to move, inspire and set audience’s feet dancing.

“KINKY BOOTS is a one-of-a-kind musical filled with incredible energy, and an extremely powerful message,” according to Drew Cohen, President of MTI.  “’Being who you want to be’ resonates with people everywhere and is made palpable through Cyndi Lauper’s infectious score and Harvey Fierstein’s hilarious and insightful book.  The show provides so many opportunities for creative choreography and actors will love bringing these characters to life on their stages across the country.”

The original production of KINKY BOOTS premiered in Chicago in October 2012, with both direction and choreography by Jerry Mitchell, and starring Stark Sands and Billy Porter as Charlie and Lola, respectively. It made its Broadway debut at the Al Hirschfeld Theatre on April 4, 2013.

The production earned a season-high 13 nominations and 6 Tony wins, including Best Musical and Best Score for Lauper in her first outing as a Broadway composer, making her the first woman to win alone in that category. The musical’s cast album premiered at number one on the Billboard Cast Albums Chart and number fifty-one on the Billboard 200 chart.

The National Tour kicked off in Las Vegas on September 4th, 2014.

For more information about MTI and licensing, please call (212) 541-4684 or email licensing@mtishows.com

Music Theatre International (MTI) is one of the world’s leading theatrical licensing agencies, granting schools as well as amateur and professional theatres from around the world the rights to perform the largest selection of great musicals from Broadway and beyond.  MTI works directly with the composers, lyricists and book writers of these shows to provide official scripts, musical materials and dynamic theatrical resources to over 60,000 theatrical organizations in the US and in over 60 countries worldwide.