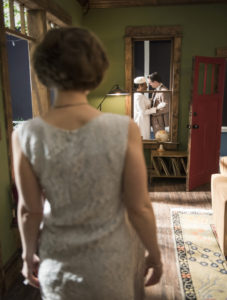 “Southern Gothic” gives audiences the opportunity to be a “fly on the wall” at a cocktail party in Ashford, Georgia in the 1960s where four couples gather together to celebrate a birthday. As the evening progresses, tensions rise and longtime relationships are tested as the characters soon realize that even the best of friends keep the darkest of secrets. Due to the intimate nature of the show, audience size for each performance is limited to 28 patrons, giving audiences freedom to roam every room of the home at will, exploring various spaces and eavesdropping on clandestine conversations, providing each audience member their own unique perspective on the evenings proceedings.
In addition to Liautaud and Bell, the creative team for “Southern Gothic” includes Carl Menninger(Dramaturg and Co-Creator), Amy Rubenstein (Co-Creator), Scott Davis (Scenic Design), Elsa Hiltner(Costume Design), Jeffrey Levin (Sound Design) and Logan Boyd Jones (Production Stage Manager).
Unlike some immersive theater experiences, “Southern Gothic” is plot-driven, with each audience member experiencing various aspects of the party, yet still taking in the arc of the story line. The cast of “Southern Gothic” does not interact with the audience, leaving patrons free to watch the scenes happening around them like an invisible guest, traveling from room to room and sampling period-appropriate cocktails and snacks throughout the duration of the performance.
“We have been thrilled by the reaction we have received for this unique production,” said Artistic Director and “Southern Gothic” Co-Creator Amy Rubenstein.  “Our goal has been to give our audiences a new theater-going experience, breaking down the barriers between audiences and performers in exciting ways. “We are eager to continue sharing the story of ‘Southern Gothic’ and its uniquely immersive presentation with more audiences in the new year. Meanwhile, we will continue to bring new productions into our primary venue on Irving Park Road, beginning with the comedy classic ‘Noises Off,’ for our existing patrons and subscribers to enjoy.”
“Southern Gothic” is performed at Windy City Playhouse South, 2229 S. Michigan Ave. Tickets ($65 – $100) are available in-person at the Windy City Playhouse Box Office, online or by calling the Box Office at (773) 891-8985.
The performance schedule for “Southern Gothic” is as follows: Wednesdays and Thursdays at 7:30 p.m., Fridays at 8 p.m., Saturdays at 4 p.m. and 8 p.m., and Sundays at 2 p.m. and 6 p.m.  For a detailed performance schedule visit Windy City Playhouse’s Events Calendar. Capacity for each performance is limited; prices and showtimes are subject to change.
About Windy City Playhouse
Windy City Playhouse, Chicago’s most sophisticated not-for- profit Equity theater, aims to expand beyond the traditional theatergoing experience by offering audience members a night of high-quality entertainment with a welcoming full-service bar in a lounge-like atmosphere with a fireplace and luxurious seating designed to foster pre and post-performance conversations.  Windy City Playhouse commits itself to audience-first programming and to presenting contemporary, diverse and humorous plays. Every aspect of the theater—the bar, décor and overall atmosphere—breaks down the formality and rigidity of the typical theater going experience. Lauded by audiences and critics alike, Windy City Playhouse promises to rock Chicago’s theater scene.
For more information, visit WindyCityPlayhouse.com and follow on Facebook, Twitter and Instagram.

This site uses Akismet to reduce spam. Learn how your comment data is processed.