I’ve seen many memorable plays at the Milwaukee Repertory Theater, but Things I Know To Be True, a powerful and poignant examination of family turmoil written by Australian playwright Andrew Bovell, is in a class all by itself.  This play resembles a mirror being held up in front of our own family, reminding us, or rather warning us, of what’s important – before it’s too late.

Things I Know To Be True recently had its American premiere at The Rep, following its world premiere in Australia and an acclaimed run in the United Kingdom.  Bovell revised parts of his work, re-setting it in a midwestern town like a Milwaukee or a Chicago, where a typical American family resides.

In this case, that typical American family is called Price.  It consists of Fran (Jordan Baker), the Mom and a nurse who loves her husband and children, but maybe a bit too much.  A Mom’s job is to make her kids cry, to make them feel pain, she declares.  There’s Bob (Bill Geisslinger), the Dad, who lost his job at 56 and feels life has passed him by and thought his kids would be better than he and his wife.  Daughter Pip (Kelley Faulkner) is a career woman and mother of two who wants out of her marriage and heads over to Finland, where she falls in love with a married man; Son Ben (Zach Fifer) is a corporate hotshot, but not the ideal man in his father’s eyes: “I had two kids and a mortgage at his age,” remarks Bob.  Son Mark (Kevin Kantor) breaks off his romance with a woman because he knows he’s gay and wants to undergo a sex-change operation, which is hard for Bob to accept. And there’s daughter Rosie (Aubyn Heglie), who’s suffering from a broken heart and sets off another clash when she announces her desire to study creative writing. Each actor exhibits a total command of his or her character, each turning in a complex, superlative performance. 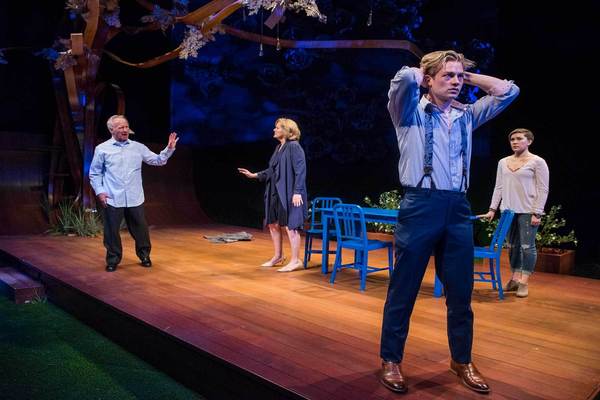 The Prices’ emotional confrontations play out not around a dining room table, which we might associate with family drama, but rather in a backyard ripe with memories of special occasions in the Price scrapbook of life, like proms, graduation parties and weddings.  We even learn Pip had a sexual encounter with her cousin in this very yard.  Scott Davis’ scenic design of trees and shrubs creates a backdrop of serene, natural beauty that’s in stark contrast to the intense battles waged by the Price family.

OK, we know Rosie was a surprise child, Pip is leaving her husband against Mom’s wishes, Dad could’ve had more in life, Ben has a drug problem and stole money, Mark wants to be a woman named Mia, Mom wishes she and her husband never had kids – and even admits to a relationship with one of her patients.  Things happen that shouldn’t or that are hard to accept.  Things are said that are best left unsaid.  These things happen in all families, but they shouldn’t because families are supposed to reach those so-called high expectations that are set.  Each one here needs the support of family but doesn’t necessarily get it.  This is where the tragedy is, but it isn’t really a tragedy.  These things are small in compared to what could happen – and does happen to the Price clan.  A series of emotion-charged battles culminate in a shocking finale that stuns the audience into a stony silence.  Rosie’s words sum it up best: “Having your heart broken by a man from Spain is not the worst thing to happen.”

As the cast filed off the stage during a much-deserved standing ovation on opening night, I noticed two of the actors had tears in their eyes.  They were deeply touched by the explosive material they had performed during the past two-and-a-half hours.

Things I Know To Be True is fast-paced, epic storytelling overflowing with struggle, humor, and regret – all things we know to be true.  The production is artfully staged by Rep Artistic Director Mark Clements, with stage and movement direction by Julia Rhoads, artistic director of Lucky Plush Productions, a Chicago-based dance company.  The dance elements amid the battles contribute beautifully to the notion of family ties.

Things I Know To Be True runs through March 31 in the Quadracci Powerhouse, located at 108 E. Wells in downtown Milwaukee.  For tickets visit www.MilwaukeeRep.com or call (414) 224-9490.