Dramaturg and radio personality Roger Pines discusses the upcoming RENÉE FLEMING 25TH ANNIVERSARY CONCERT & GALA at Lyric Opera of Chicago on March 23, 2019. We also explore how the Lyric stays relevant with the changing demographics of the opera audience and the successful impact Ms. Fleming has had during her tenure as creative consultant. Learn more about the Gala here or call 312.827.5682 to inquire about premier concert seating and Gala attendance.

Roger Pines, dramaturg of Lyric Opera of Chicago, has been commentator for the Lyric broadcasts on WFMT98.7 since the 2009-10 season.  He joined Lyric in 1995, having previously held positions at San Diego Opera, The Dallas Opera, and Glimmerglass Opera.

At Lyric, Pines edits the house program while also writing extensively for other company publications. He is a presenter of pre-performance talks, both music producer and a co- 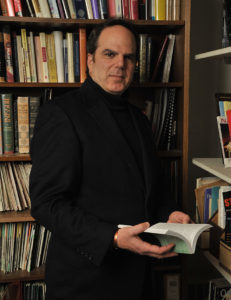 host of Operathon (Lyric’s annual fundraiser on WFMT), and special lecturer and consultant for the Ryan Opera Center, the company’s young-artist program.

Pines frequently undertakes repertoire research projects for internationally celebrated artists. He has been a judge in more than 20 cities for the Metropolitan Opera National Council Auditions and has judged many other prestigious competitions nationwide. 2015-16 was Pines’s tenth consecutive season as a panelist on the Met broadcasts’ “Opera Quiz.”

A contributor of many articles and reviews for important American and European publications, Pines has written for Great Britain’s most distinguished newspaper — The Times (London) – as well as Opera News, Opera, International Record Review, The Opera Quarterly, and programs of leading opera companies, among them the Metropolitan Opera, San Francisco Opera, Houston Grand Opera, and Cincinnati Opera. He has written program notes for CDs on seven major labels (including recent releases by Renée Fleming, Joyce DiDonato, Anna Netrebko, and Jonas Kaufmann). Pines has lectured for major arts organizations in Chicago, Cleveland, and San Diego, as well as for the American Institute of Musical Studies in Graz, Austria.

Since that debut, this cultural icon and international star has continued to make headlines wherever she goes. Whether it has been in leading roles on the most celebrated stages, receiving a National Medal of Arts from President Barack Obama, or singing the National Anthem at the Super Bowl in front of more than 100 million viewers, Renée Fleming has become known as “The People’s Diva.”

During this extraordinary time, she has also made Lyric Opera an artistic home. She has performed onstage, fostered emerging artists in her role as advisor to The Patrick G. and Shirley W. Ryan Opera Center, and encouraged a future generation of opera lovers through Lyric Unlimited programs.

Since 2010, Ms. Fleming has served as Lyric’s creative consultant. She has been the driving force behind projects like Lyric’s world premiere opera Bel Canto, collaborations with The Second City, and the Chicago Voices initiative, which bridged musical genres and generations in a groundbreaking, multi-faceted series of programs during the past two years.

Join Lyric as we celebrate and honor Renée Fleming’s extraordinary commitment to Chicago and her unparalleled contributions to our art form over the last 25 years. The Lyric Orchestra and a cast of friends will perform in an extraordinary evening including arias from The Marriage of Figaro, Tosca, Falstaff, Rusalka, and The Merry Widow along with selections from Carousel and The Light in the Piazza.

This one-night-only event will feature an exclusive Gala at The Ritz-Carlton following the performance. Celebrate with us in style as we pay tribute to Ms. Fleming with dinner and dancing until the clock strikes midnight. The glamour of this special evening will be matched only by Ms. Fleming herself!

Learn more about the Gala here or call 312.827.5682 to inquire about premier concert seating and Gala attendance.