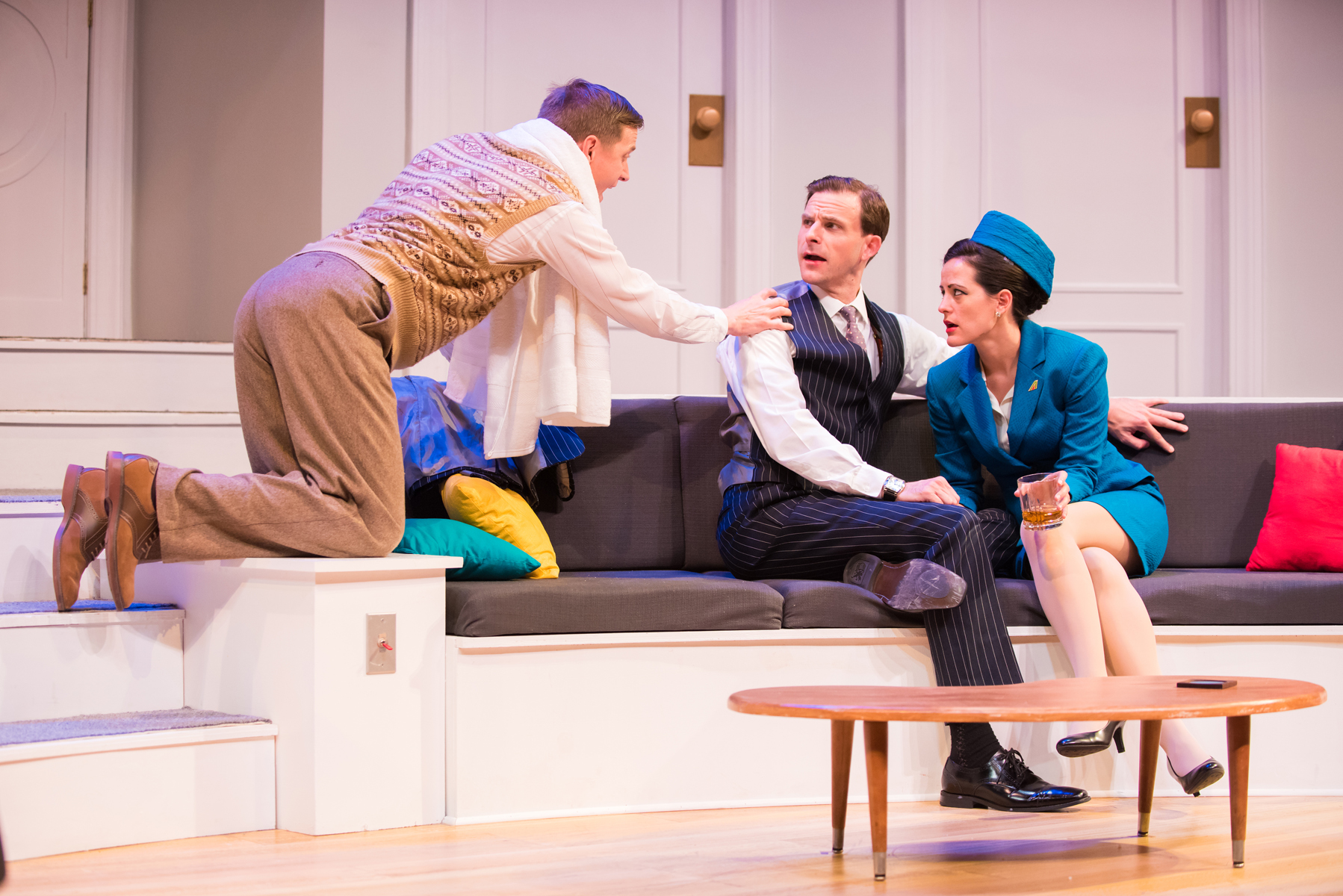 If you plan to attend the Milwaukee Chamber Theatre’s production of the Tony Award-winning sex farce Boeing Boeing, you might want to keep in mind a gem of a quote by Sir Peter Hall that’s found in the playbill: “Farce allows us to watch the sort of bad behavior that we could never publicly endorse, but which we secretly know we might be capable of.”Then it’s time to fasten your seatbelts for a flight filled with guilty pleasure: a bachelor living in 1960s Paris – think Mad Men on steroids – is romancing three beautiful stewardesses all at once. But turbulence erupts when a buddy – from all places, Wisconsin – arrives, and his three “fiancées” are all in town at the same time.

The Chamber Theatre’s production of Marc Camoletti’s Boeing Boeing soars with hilarious hijinks performed by a talented cast under the direction of Michael Cotey.

With its heavy dose of physical comedy, Boeing Boeing tests an actor’s agility. Brian J. Gill, as swinging bachelor Bernard and Ryan Schabach as his naïve buddy Robert, brilliantly rise to the challenge. As the trio of airline hostesses parading through Bernard’s swanky Paris digs, Anne Walaszek as the American Gloria, Amber Smith as the Italian Gabriella and Samantha Sostarich as German Gretchen nail their characters beautifully. They also fill out beautifully the brightlycolored, form-fitting 1960s-era stewardess outfits created by Eleanor Cotey.

But snaring the crown of scene-stealer is Marcella Kearns as Bernard’s housekeeper, the devoted – and sex starved – Berthe. Her facial expressions and interactions with the main characters arespot-on hilarious. Kearns deservedly earned the loudest applause from the audience at curtain call.

Chicago and Illinois are well represented in this Milwaukee production of Boeing Boeing: Director Cotey has worked as an actor with the Illinois Shakespeare Festival; Gill’s has appeared with the Goodman Theatre, Chicago Shakespeare and Drury Lane Oakbrook; Walaszek, a resident of the Windy City, performed as Imogen in Cymbeline at Muse of Fire Theatre in Evanston; and costume designer Cotey is in her second season with Chicago’s Joffrey Ballet.

For the theatergoer looking to indulge in laughter, the Milwaukee Chamber Theatre’s Boeing Boeing offers a perfect end-of-summer-fling. It plays the quaint Cabot Theatre of the Broadway Theatre Center, 158 N. Broadway, in Milwaukee’s Historic Third Ward now through Aug. 30. For tickets, call (414) 291-7800 or visit milwaukeechambertheatre.com.