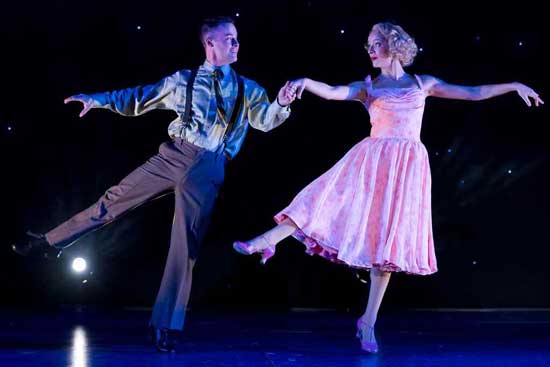 For the last decade, theater has been run amok with our favorite holiday or more precisely Christmas films making the transition to the stage.   When so many of those movies resonate in our collective memory and feature some of our most beloved stars, their move to the boards becomes all the more difficult.  Luckily, Drury Lane’s White Christmas, through its casting of Matt Raftery, creates new memories and becomes a stand alone piece for those who haven’t seen the classic film.

White Christmas follows two former soldiers, Bob Wallace (Sean Allan Krill) and Phil Davis (Matt Raftery) who entertained during World War ll then continue doing so after their discharge, including appearing on the Great White Way. Our heroes meet two female entertainers, Betty Hanes (Gina Milo), and Judy Haynes (Erica Stephan). The four ultimately learn the former commanding officer and the retired General Waverly (Don Forston) is running the inn. After Wallace and Davis learn that their General Waverly is having financial troubles in keeping the inn going, they decide to surprise him with a show for Christmas.

The story and book are timeless, made moreso by Irving Berlin’s music, with favorites that include “Happy Holidays”, “Let Me Sing/ I’m Happy”, “Blue Skies”, “Sisters”, “Love You Didn’t do Right by Me”, and of course “White Christmas” and is pitch perfectly  sung  by Sean Allan Krill, Matt Raftery, Gina Milo ,and Erica Stephan. As soloists, their voices are superb and together, blend wonderfully.

While most of this show’s content is vibrant, the main problem was some of William Osetek’s directorial choices which ultimately resulted in a the lack of emotional chemistry between the four main characters.  Hopefully this issue will be lessened as the show gets more performances under its belt and the actors find more fluidity in their own character development.

Robert Kuhn costumes were creative but rarely engaging while designer Rick Jarvie should reimagine Gina Milo’s wig and make-up into something a bit more fitting for this fine actress.

Overall though, the issues with Drury Lane’s White Christmas are minor with the voices were wonderful. I loved Sean Allan Krill’s voice singing “Count Your Blessings” and “Blue Skies”. He really has a lovely baritone voice. Matt Raftery’s voice and dancing were excellent, and smartly conveyed Phil’s mischievous and care-free character traits through brilliant movements. Gina Milo and Erica Stephan’s voices blended beautifully during “Sisters” I loved their voices and the choreography. All of the blending of the four lead voices were wonderful. Alene Robertson can still belt, as she proved in “ Let Me Sing/I’m Happy”. Then there is young Maya Lou Hlava (whom I assume is approximately 12 years old) possessing  a powerful voice and a sweet on-stage presence.   Kudos to choreographer Matt Crowle for a dynamic job with another visually pleasing set design by Kevin Depinet.

Drury Lane’s White Christmas has the ability to become as big a holiday tradition as its film counterpart, especially with Matt Raftery’s JEFF worthy performance.    May your days be merry and bright!