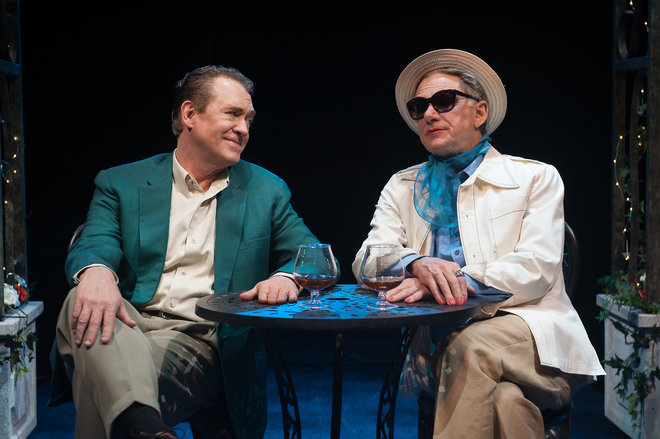 I remember seeing the original Broadway production of Jerry Herman and Harvey Fierstein’s La Cage aux Folles in 1983 (based upon the 1978 play and later, French film by Jean Poiret) which was one of the greatest theatrical experiences I have experienced. When George Hearn as Albin sang the gay anthem “I am What I Am” and marched down the aisle of the theatre with tears streaming down his cheeks, onto the streets of New York slamming the door behind him I was so deeply moved I was also in tears. He never put on the “gay” but gave a deeply moving performance about our rights to love whomever we want. It is a moment in theatre that is indelible for me.

How far the gay movement has come since La Cage hit the Boards in 1983. Seeing two men even kiss on the cheek and hold hands on stage was still somewhat of a shock in the Regan era conservatism and frightening world of AIDS. Having lived through these horrible years and losing many dear friends I still tear up when the song “The Best of Times” is sung in the second act and the lyrics “live and love as hard as you know how” are delivered. Although the meaning of these words has softened over the years they still resonate with me as the heart of La Cage’s message.

Not only does Jerry Herman provide one of his best, most personal and most poignant scores, Fierstein’s book presents the taboo subject of homosexuality and drag queens to a large, commercial audience in a manner that, through laughter, wins them over for at least the evening and presents the humanity and rights of the gay community. Both Herman and Fierstein provide a love story that does not preach or ram the subject down the audience’s throats in a militant way which is the key to its long-running success, accumulation of 11 Tony Awards and constant revivals.

The show is set against the glamorous background of a St. Tropez nightclub and focuses on gay partners Georges and Albin, and the chaos that ensues after George’s son Jean-Michel announces that he plans to marry the daughter of an ultraconservative politician.

Director Joe Leonardo, who directed Marriot’s hugely successful 1998 production, is once again at the helm and delivers a largely successful production once again. Much of the success or failure of La Cage hinges on the casting of the role of Albin and the chemistry he has with his longtime partner, Georges, the host of the night club, LaCage Aux Folles. This time around Leonardo has cast Chicago favorite Gene Weygandt (a star of Chicago Fire) as Albin (a frightening reincarnation of Tallulah Bankhead). Having seen many revivals of LaCage (usually dreadful but for a couple of exceptions) Weygandt can rightfully assume his place next to George Hearn, creator of the role, regarding a deeply moving performance coming from his heart. While providing the required effeminacy for the role Weygandt is still a man and always maintains his center and purpose. I believe he loves Georges and they have been together for 20 years and are still deeply in love. Although it took most of the first act on the Friday evening I saw the show for him to capture the audience, by the time he brought down the house with “I am What I Am” he had the audience firmly in his hands and only got better. He is the driving force behind this production and a key reason for its success. He is just plainly effervescent.

Cast opposite Weygandt as his lover Georges (David Hess) did a fine job in the role has both have the needed chemistry to make the relationship of 20 years believable.  Hess’ best moments are when he sings “Song on the Sand” and “Look Over There”.

As Georges son, Jean Michel, Leonardo has cast another Marriot favorite, Brian Bohr, an actor of boyish charm that is different from the usual casting of a dark featured, handsome French looking boy. I felt that he is lacking the smoldering sexual energy of Jean-Michel and came across as more of a Midwestern farm boy.

The other main standouts in the company are more Chicago veteran actors and Marriot regulars. It is always a pleasure to see Susan Moniz on stage in any role but as Albin’s best friend and restaurant owner Jacqueline, she possesses a razor-sharp comic timing and sheer presence to make the role stand out (which was not the case in the original Broadway production). Anne Gun (Mme. Didon, wife of the ultraconservative politician and father to Jean-Michel’s intended) takes a thankless role and infuses her own magic into it giving it the special quality as only she can. Larry Adams’ M. Renaud (the café owner of George and Albin’s favorite hangout) provides the French ambiance of the Riviera (I wish others in the company could have followed his lead on creating the feeling we are in the French Rivera). Fred Zimmerman (Didone), another Chicago favorite, is perfection as the unsavory politician with a mission to hunt down the homosexuals and close La Cage aux Folles. Seeing him in drag (not a pretty girl, mama!) is worth the price of admission and the drive out to Lincolnshire. It is one of those moments in Chicago theatre that will live on.

While the ensemble of drag queens are outstanding dancers (coached by a real Rockette Melissa Zaremba, who is also the Choreographer) many of the campy one-liners fell flat due to misfiring timing (I will admit that playing to a largely suburban audience of mature heterosexual couples is daunting). In the role of the gay maid/butler Jacob, I felt that Joseph Anthony Byrd was trying too hard to be funny and became a caricature at times. This role needs to be underplayed because the camp element is written so firmly into it that to attempt to add any more will sink it.

Nancy Missimi’s costumes are gorgeous and capture the essence of the original design without copying them. Marriott wisely budgeted the funding to have the costumes as a central part of the design. I wish Thomas M. Ryan’s set design could have been more opulent and less garish; however I loved his use of see through mirrors as an integral part of his design. I am surprised that he did not include any levels or rising platforms as Marriott has done with other productions to break up the flatness of the stage.

While the orchestra has limitations that reduced the overall sound of Herman’s original score it did not bother me with this production as it has with others I have seen. The focus was on the ensemble.

The only negative criticism of the show I have as a whole is that the first half of act one fell flat due to funereal tempos which dragged down the pace of the show with the first few numbers (this was the performance after the opening night) and I did not become fully engaged until Georges and Ablin sang the most gorgeous love ballad in the show, “Song on the Sand”. At this point I felt the cast, as a whole, stopped pushing to be funny and relaxed into the story, focusing the poignancy of the story. The second act is definitely the stronger of the two and the cast knocked it out of the park (which was evident at the curtain call when the cast got a well-deserved standing ovation).

For those who have never seen a production of La Cage aux Folles I highly recommend going the distance to see this one. It is the closest production I have seen which captures the strength, beauty and poignancy of the Broadway original and seeing Weygandt as Albin is something that will resonate with you and hopefully, make an indelible mark on you as it did on me.