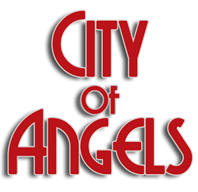 The Marriott Theatre, 10 Marriott Drive, Lincolnshire, presents the six-time Tony Award-winning classic, CITY OF ANGELS, winner of Best Musical, Best Original Score by David Zippel and Cy Coleman, and Best Book by Larry Gelbart, previewing June 10, opening June 17th and running through August 2. Five-time Jeff Award-winning Director Nick Bowling brings his exceptional talent to the hilarious and ingenious musical comedy with choreography by Jeff Award-winner Tommy Rapley.  Music Director, and Jeff Award-nominee, Ryan T. Nelson enlivens the sensational score, featuring a rich mélange of jazz and bebop styles. CITY OF ANGELS is the rarest of musical comedies; one that is not only loaded with music and written in the contemporary jazz idiom, but also filled with sidesplitting comedy, set in the glamorous, seductive Hollywood of the 40′s – the world of film studios and flimsy negligees.

CITY OF ANGELS is the deliciously funny celebration of the decade’s film noir genre and dark detective fiction, with a liberal touch of femme fatale, weaving together two plots unfolding at once. The double feature follows the “real” world of young New York writer, Stine (Jeff Award-winner Rod Thomas: Les Misérables at Paramount Theatre; The King and I and Mary Poppins at The Marriott Theatre), and his fictional alter-ego in the “reel” world, “Stone” (Jeff Award-winner Kevin Earley: Broadway: A Tale of Two Cities, Thoroughly Modern Millie; Broadway and National Touring companies of Les Misérables; The Pirates of Penzance at The Marriott Theatre). Stine arrives in Los Angeles with the hopes of turning his crime novel into a Hollywood blockbuster, and while his movie plays out in black and white, Stine’s new life is all-too colorful as he struggles to balance his relationship with his wife, Gabby (Jeff Award-winner Danni Smith: Passion and Pump Boys and Dinettes at Theo Ubique; See What I Wanna See at Bailiwick) and his overbearing producer Buddy Fidler (Jeff Award-winner Gene Weygandt: National Tour of Wicked and Big: The Musical; Anything Goes, La Cage aux Folles at The Marriott Theatre). Each movie scene that Stine writes comes to life in the split-stage show, bringing double the laughter and intrigue to the audience.

The performance schedule is Wednesdays at 1:00 p.m. and 8:00 p.m., Thursdays and Fridays at 8 p.m., Saturdays at 4:30 p.m. and 8 p.m., Sundays at 1:00 p.m. and 5 p.m., with selectThursday 1:00 p.m. shows. Ticket prices range from $50 to $55, including tax and handling fees. On Wednesday and Thursday evenings, there are a limited number of Dinner and Theatre tickets available and can only be purchased through the Marriott Theatre Box Office. On Friday and Saturday evenings, dinner reservations can be made at the King’s Wharf restaurant. Additionally on Sundays, dinners in the Fairfield Inn are available. To make a reservation at either of these two restaurants, please call 847.634.0100. Free parking is available at all performances. To reserve tickets, please call The Marriott Theatre Box Office at 847.634.0200. Visit www.MarriottTheatre.com for more information.