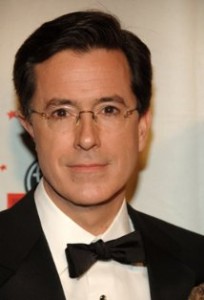 Lookingglass Theatre’s Board of Directors and Gala Committee announce one of Chicago’s highly anticipated events of the season, the 2013 Lookingglass gglassquerade, which will celebrate 25 years of ensemble collaboration, transformation and invention.  Host Stephen Colbert, of Comedy Central’s The Colbert Report, will be presented with the Lookingglass Civic Engagement Award at the event. gglassquerade will be heldSaturday, March 2, 2013, at 6:00 p.m. at The Four Seasons, 120 East Delaware Place in Chicago.

“The fact that Stephen is uncannily brilliant, desperately funny, and irritatingly good-looking is not particularly important, or something we should hold against him (but we do so anyway),” quips Artistic Director Andrew White.  “What is important is from his early days doing improv with Lookingglass founders at Northwestern to his current role as host of the award-winning show The Colbert Report, Stephen has been a great friend to Lookingglass and a champion of, and ambassador for, the City of Chicago.  We are so pleased to have him as the host of our 25thAnniversary gglassquerade and to present to him the Lookingglass Civic Engagement Spirit Award.”

Each year gglassquerade attracts Chicago’s corporate, cultural, and social leaders. With the funds raised throughgglassquerade, Lookingglass will advance its commitment to new theatrical works and increase its work with Chicago-area students and families through educational and community programming reaching thousands of community members annually.

The Co-Chairs of the 25th Anniversary Committee are Les Coney of Mesirow Financial and Lookingglass Immediate Past Chairman Lisa Naparstek Green.

BMO Harris Bank and Richard A. Ditton & Incredible Technologies, Inc. are the Platinum Sponsors of the 25thAnniversary Lookingglass gglassquerade.

Table sponsorships can be purchased by calling the Lookingglass Development office at (773) 477-9257, ext. 116, or by emailing events@lookingglasstheatre.org. Ticket levels are as follows:  Platinum Sponsor, Presenting Sponsor, Grand Benefactor, Eminent Supporter, and Gala Patron.  The gala is expected to sell out through table sponsorships. If availability remains, single tickets will be offered mid-November.