Light Opera Works FIDDLER ON THE ROOF – Twilight of Tradition 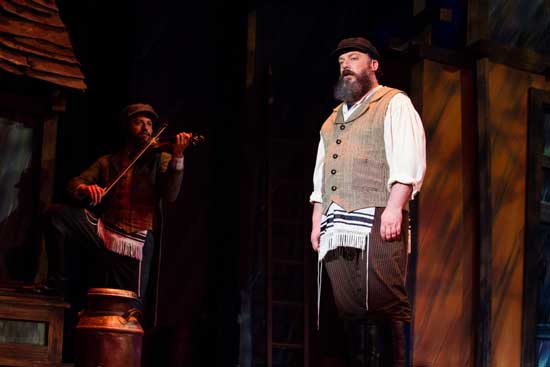 There is a spectacular production at the Cahn Auditorium in Evanston!  Light Opera Works, one of the finest musical theatre companies in the Chicagoland, has a hit on their hands with their gorgeous and emotional Fiddler on The Roof.

This 50 year old classic musical is based on Sholem Aleichem’s stories of the persecution of the Jews in Czarist Russia on the dawn of the Russian Revolution with one of the finest scores in musical theatre history by Jerry Bock and Sheldon Harnick.

Fiddler of the Roof is about traditions.  Tevye, the milkman of the small village of Anatevka and his wife Golda have 5 daughters.  The town Yente, or Matchmaker has arranged a marriage between their eldest daughter Tzeitel with the moderately wealthy and much older town butcher Lazar Wolf.  Tzeitel is in love with Motel, the tailor and begs her father to let them marry.  Tyeve, a man of strong tradition relents and allows the marriage.

He faces a similarly situation with his second daughter Hodel and her love for Perchik, a visiting student with radical new ideas that defy the old traditions.  Tevye, thinking this young man a radical cannot help but to like him and allows Hodel to marry him.

However when his third daughter (and favorite) falls in love with the Russian bookseller Avram, he cannot bend any further from tradition or he will break; he refuses.  In spite of her father’s feelings she tells him that she and Avram will marry and leave the village.  From this point on she is dead to Tevye.

After this the Russian town Constable, who has always been friendly with Tevye, warns him that he, his family and everyone else has three days to pack up and leave the village or face death.  Tevye has no choice but to obey and still strong, like Moses, leads his people from the village into an unknown future.  However he still has his traditions.

With current world events it made me view Fiddler through a different set of eyes and the danger we all face with the religious fanaticism of forces whose sole aim is world domination.  Witnessing the pogroms on stage makes this reality ring true and should wake people up to unite and take a stand against evil.

Artistic Director Rudy Hogenmiller has staged one of his finest and in this Fiddler on the Roof we see the vastness of his gifts as a visual artist, choeographer and director.  This is one of Hogenmiller’s most mature productions I have seen and he has managed to capture the spirit, beauty and epic nature of the story in minute detail and precision.  He has assembled a 1st rate cast who forms a solid ensemble and tells this story with great heart, humor and warmth.

When Tevye (the phenomenal Alex Honzen in a role he was born to play) steps out in the opening number “Tradition” he has you in the palm of his hand.  Honzen, in a tour de force performance brings a great warmth, sadness and understated humor to the iconic role created by the late Zero Mostel.  Where Honzen excels, as he always does, is in the underplaying of the role minus any shtick.  With his Tevye he is the earth father and anchor for the production and will have you laughing and in tears.  The right role has finally come along that provides this great actor with the platform to display all of his talents.

Jenny Lamb’s Golda (Tevye’s wife) though too young for the role brings a sense of comedy and pathos to her, also having great chemistry with Honzen.

Other standouts are Michelle McKenzie-Voight as Shaindel, Amanda Horvath in a hysterically funny turn as Golda’s deceased Grandma Tzietel (in one of the best dream sequences I have seen) and Russell Alan Rowe in a chilling and accurate portrayal as the town Constable, bringing just the right balance of sympathy and dedication to his country regarding the Pogroms he must order.

Marian Kaderbek’s Tente, the town matchmaker is delightful and humorous in the role while not evolving into caricature and Rick Rapp’s Lazar Wolf has great chemistry with Honzen’s Tevye.

As I do not have enough room in this review to acknowledge everyone I also commend the ensemble that does an outstanding job and brings heart, great skill and a feel of old Russia to Hogenmiller’s Fiddler.

Largely responsible for the look of this Fiddler is Light Opera Works set designer and technical director Adam Veness who creates a vivid, Technicolor, intricate landscape for a show that is usually designed in washed out browns and grays.  The physical demands of the staging of this show are handled masterfully with Veness’ village homes opening up on hinges to reveal interiors seamlessly and without interrupting the pacing or flow.

Andrew Meyers’ lighting design is spectacular and provides magnificent rich color, capturing all of the moods throughout this 3 hour epic.  In fact all of the design elements, including Jesus Perez and Jane Debont’s spot on costumes, have a Broadway patina that rivals the larger equity theatres in Chicago.

Although Fiddler on the Roof is constantly performed around Chicagoland it is rare to see one with such an outstanding 15 piece union orchestra led by the incomparable Roger Bingaman and the sheer artistic brilliance and minute detail of Artistic Director Rudy Hogenmiller.

This Fiddler will stay with you long after Tevye and his family has left the village and reminds you of the importance of the traditions in your own lives that should be cherished and guarded against this bleak modernity we are experiencing.

Light Opera Works’  Fiddler on the Roof has a short run only through August 24th at Cahn Auditorium in Evanston.  Performances are Thursday through Sunday with a Wednesday matinee August 20th.  Box Office 847-920-5360