When Kander and Ebb’s Cabaret, a musical about the uprise of Nazi Germany, premiered on Broadway in 1966, it was saluted (and vilified)  as being edgy, transformational and groundbreaking in both book and score.   Winning 8 Tony awards that season, Cabaret made a star out of Joel Grey whose performance as the asexual emcee is still considered one greatest the Broadway stage has ever seen. After many years on Broadway, London and on tour, Cabaret made it to the big screen  in 1972 as a vehicle for Liza Minelli, with only a few of the songs from the stage production in tact.    The film was a smash and cemented Cabaret as one of the greatest musicals of all time. 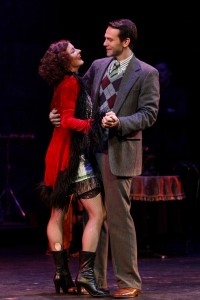 But, as is the case for many a groundbreaking musical, time can have a way of eroding its relevancy, even with a story as important as the one contained in Christopher Isherwood’s book (which was adapted from the 1930’s novel The Berlin Stories as well as the 1950’s play I Am A Camera).    The keepers of Cabaret tackled this problem head on and reworked the book and score for the 1980’s revival (with Joel Grey) making the characters much more defined.  Then  in 1993 director Sam Mendes made the show as prolific as one could imagine in the iconic version which premiered at the Donmar Warehouse in London, then later transferred to Broadway with its lead, Alan Cumming.  Mendes’ version is gritty, raw and emotionally riveting while recognizing  the changing demographic of the audience yet still respecting source material and making it relevant to a new generation to describe this horrific tale of events.   Cabaret is one of the few musicals that has been able to evolve with the times and also the rarity were the revival  has become more popular than the original (same with Porgy and Bess and Chicago).

So with all that said, sitting through Light Opera Works big budget, fully decked out offering of the original 1966 version was hit and miss.   Yes, there is a full orchestra and a ensemble of many with some notable performances, but even master director/choreographer Stacey Flaster can’t overcome how bland and devoid of character development the 1966 version is compared to what has come after (and is available to theater companies to produce).      Case in point, the character of Sally Bowels.  Actress Jenny Lamb has the ability to knock this role out of the park, and for the most part does so.  But the Sally as penned in this version is a shell of who is she is in subsequent versions.   All one has to do is listen to the lyrics of “Maybe This Time ” (written for the movie, but now central to the stage versions) and right there you have how broken this woman is, eking out an existence which she sees quickly coming to and end.   The doomed love affair between Fraulein Schneider (Barbara Clear) and Heer Schultz (Jim Heatherly), which should be secondary characters, are forged front and center here, and though competently acted and sung, the book doesn’t give the actors much room to pontificate, other then a big song and dance number “Meeskite”, which was thankfully cut in the newer versions.

Then there is the role of the Emcee, which Light Opera Works artistic director Rudy Hogenmiller clearly has the prowess and vocal chops to play.  Mr. Hogenmiller has a past history with this musical.  The respect he innately has for its predecessor shows in his performance.   But, the Joel Grey interpretation of the edgy Emcee can only go so far with a book that is fighting against your character interpretation.  Here the Emcee is akin to The Phantom of the Opera  who merely lurks around the Kit Kat Klub watching the acts fade as the government seizes control. (Christine…Christine, oops I meant Sally……Sally).

The biggest problem with Light Opera Works production lies in the technical side, wherein microphones where so out of balance and tinny that poor Jenny Lamb sounded nothing like she actually does.  Add to that a conductor  (Roger L Bingaman) who seemed to fight the actors for tempo and timing causing a disconnect of what the actor tried to emote and what the conductor wanted the tempo of the song to be.  This made for interesting choreographic pacing that the actors did not seemed prepared for.

That said, this is a production definitely worth seeing if for no other reason then to put yourself back in time and imagine what theatergoers of 1966 must have thought when the lead of a show was openly singing about screwing two ladies at once; the leading lady’s closing number comes after she has an abortion and is clearly on the path of self destruction and the finale, where in most every other musical has you tapping your toes, Cabaret instead leaves you with a since of foreboding and goose bumps chill the very core of your being.