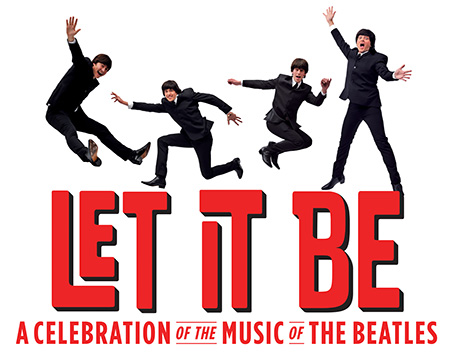 The acclaimed Beatles concert LET IT BE will launch a U.S. trek starting Wednesday, February 18. LET IT BE is the only show with grand rights to The Beatles’ music, and it has played to rave reviews and sold-out crowds on London’s West End and on Broadway in New York City. Jam-packed with over 40 of the Beatles’ greatest hits, LET IT BEhas already been seen by over 1 million people worldwide. The February trek will mark LET IT BE’s first North American tour after Broadway.  Following the U.S. and Canadianrun of shows, LET IT BE will return to the U.K. for a series of dates at London’s Garrick Theatre before heading to Ireland in October 2015.

For the past 50 years, the music of The Beatles has touched millions of people around the world, and yet were experienced live in concert by very few. LET IT BE brings The Beatles’ incredible songs to a whole new audience of music lovers. All of the music is performed live before the audience so fans can relive The Beatles’ meteoric rise from their humble beginnings in Liverpool’s Cavern Club, through the heights of Beatlemania, to their later studio masterpieces, with live performances of early tracks. A partial set list fromLET IT BE includes “Hard Day’s Night,” “Day Tripper,” “Twist and Shout,’ “Get Back,” “I Wanna Hold Your Hand” and “Strawberry Fields,” as well as global mega-hits “Yesterday,” “Hey Jude,” “Come Together” and, of course, “Let It Be.” LET IT BE will play for ‘one night only’ in most cities (see all dates below). Travel back to the magical 60’s when all you needed was love, and a little help from your friends!

Produced and created by Annerin Productions, LET IT BE is the only show featuring the music of The Beatles which has played both the West End in London and Broadway inNew York City. Annerin Productions was originally involved with RAIN: A Tribute To The Beatles, which they helped evolve from playing cruise ships in 2004, to a successful run on Broadway in 2010. Annerin was involved in a lawsuit from RAIN when it took LET IT BE to London’s West End in 2012. RAIN has not returned to Broadway since 2011. As co-creators, the lawsuit was found to be without merit and the case was dropped. In just over two years, LET IT BE has gone worldwide with performances in Moscow, Japan, all throughout the U.K., Singapore, France, Germany, Switzerland and New Zealand.  The February trek will mark LET IT BE’s first North American tour after Broadway.

Following is the set list for LET IT BE:

“I Saw Her Standing There”
“Please Please Me”
“It Won’t Be Long”
“She Loves You”
“I Wanna Hold Your Hand”
“All My Loving”
“Hard Day’s Night”
“Can’t Buy Me Love”
“Do You Want To Know A Secret”
“I Wanna Be Your Man”
“Yesterday”
“Help”
“I Feel Fine”
“Drive My Car”
“Twist & Shout”
“Day Tripper”
“Sgt. Peppers Lonely Hearts Club Band”
“With A Little Help From My Friends”
“Eleanor Rigby”
“Lucy In The Sky With Diamonds”
“When I’m 64”
“Sgt. Peppers Reprise”
“A Day In The Life”
“Magical Mystery Tour”
“All You Need Is Love”
“Penny Lane”
“Strawberry Fields”
“Blackbird”
“We Can Work It Out”
“Norwegian Wood”
“Here Comes The Sun”
“In My Life”
“Long And Winding Road”
“While My Guitar Gently Weeps”
“Come Together”
“Get Back”
“Revolution”
“The End”
“Back In The USSR”
“Let It Be”
“Hey Jude”

Critical acclaim for LET IT BE:

“For those who love the Beatles, this show is about as good as it gets.”
—THE TELEGRAPH (U.K.)

“Winning over an Empire full of Liverpudlians (including, last night, John Lennon’s sister Julia) is no mean feat. But one that Let It Be happily achieves.”
—LIVERPOOL ECHO

“The Beatles are back sending theater audiences dancing into the aisles.”
—REUTERS (New York)

“Fab for all the family.”
—THE TIMES OF LONDON

“Pure Beatles magic back on stage.”
—THE PUBLIC REVIEWS (Liverpool)

“Does everything and more to recreate that magic era.”
—MANCHESTER’s FINEST (Manchester)

Catch LET IT BE in the following cities:

About Annerin Productions:
Annerin Productions is a division of the Canadian based company, Jeff Parry Promotions, which has been a North American promotion company for over 32 years.  Having shifted focus over 10 years ago to produce shows in the form of high quality entertainment, Annerin Productions is now becoming a world class leader in creating nostalgic theatrical concerts for audiences to experience legendary artists who are no longer touring. Past productions include: “Bjorn Again, Barrage,” “Jason Bonham’s Led Zeppelin Experience” and “RAIN-A Tribute to The Beatles” which had a successful Broadway run in 2010/2011. Current productions include “PFX– The Pink Floyd Experience,” “The Australian Bee Gees Show” and “Let It Be-A Celebration of the Music of The Beatles.” When attending one of our shows, audiences get more than just a high quality performance–they are invited to become immersed in an entertainment experience! www.annerin.com