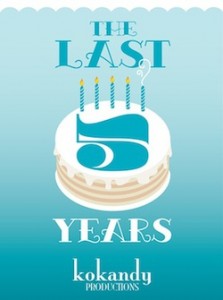 Kokandy Productions proudly presents the musical “The Last Five Years”, August 2 through 25 at Theater Wit, 1229 W. Belmont Ave. Traditionally, “The Last Five Years” is performed by two actors accompanied by musicians; the Kokandy Productions concept has cast Jim DeSelm and Allison Hendrix to portray Jamie and Catherine respectively as well as accompany their performance on two pianos. John D. Glover directs, DeSelm and Hendrix are co-musical directors and K. Hannah Friedman serves as assistant director. Tickets are $32 and are available at www.theaterwit.org or by calling 773-974-8150. For additional information visit www.kokandyproductions.com

Penned by Jason Robert Brown, “The Last Five Years” is a semi-autobiographical one-act look at Brown's own failed marriage told through the story of Jamie Wellerstein and Catherine Hiatt's five-year relationship. The piece plays with the chronology of their tale, with Jamie beginning his story when they meet for the first time while Catherine's tale starts with the couple's divorce. Songs drive the differing storylines with Jamie and Catherine singing separately except in the middle for their their wedding (“The Next Ten Minutes”).

“This is a piece that Jim (DeSelm) and I have lived with and loved for a long time and we are thrilled that Kokandy Productions has created this opportunity to explore the story in such a unique way,” said Hendrix. “'The Last Five Years' resonates strongly for those of us working in the arts because it captures the struggle of balancing art with everyday life. There's a beauty in having us also accompanying the songs, allowing the characters to share responsibility for their relationship and the way it's portrayed.”

John D. Glover (Director) returns to Kokandy Productions where he directed “The Great American Trailer Park Musical” last summer. He has directed for several regional theaters in Ohio and Indiana including the grand opening production of the Theatre at the Center in Munster, Indiana. Glover is the recipient of several awards by the Northern Indiana Excellence in Theater Foundation (NIETF) including: Best Direction of a Musical for “Pump Boys And Dinettes” (1993) at Purdue Theater Company and Best Direction of a Musical for “Floyd Collins” (2009) at the Towle Theater. In 1996, Glover received the NIETF Award for Lifetime Achievement in Regional Theater.

Kokandy Productions proudly presents the musical “The Last Five Years”, August 2 through 25 at Theater Wit, 1229 W. Belmont Ave.  There is one preview on Thursday, August 1 at 8 p.m. Regular run performances are Thursday through Saturday at 8 p.m. and Sunday at 3 p.m. There are three additional performances on Wednesday Aug. 14 at 8 p.m. and Saturday Aug. 10 and 24 at 2 p.m. Tickets are $32 and are available at www.theaterwit.org or by calling 773-974-8150. For additional information visit www.kokandyproductions.com

Allison Hendrix (Cathy) is a Chicago actor and music director who is thrilled to return to Kokandy Productions after serving as Music Director on “The Great American Trailer Park Musical”.  Other credits include Bohemian Theatre Ensemble's “Floyd Collins” (Associate MD/Conductor), Piven Theatre Workshop's “Cities of Light” (MD/Jimmi), Bailiwick's “Zanna Don't” (MD), and Porchlight Music Theatre's “The King and I” (Pianist). Favorite acting roles include Bonnie (“Anything Goes”), Louise/Eve (“Ruthless”), and ensemble in a Leon Ingulsrud-directed “Faustus”.