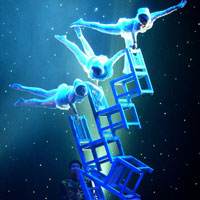 The Dr. Phillips Center for the Performing Arts presents, the 2014-2015 JAZZ ROOTS: A Larry Rosen Jazz Series, kicks off with a spectacular concert celebrating the musical genius of RAY CHARLES. An Orlando-based Gospel choir will perform in the one night only show, and 91 students and their teachers from West Orange High School will be involved in a pre-show educational experience.

Georgia On My Mind, Celebrating Ray Charles features an all-star cast of award-winning performers including a capella group TAKE 6, whose collaborations included one with the late great Charles; Emmy Award winner CLINT HOLMES, whose soulful stylings have been selling out concert halls around the world; six-time Grammy Award nominee and Downbeat vocalist of the year NNENNA FREELON; award-winning saxophonist JAVON JACKSON; and SHELLY BERG, three-time Grammy nominated music director and Dean of the UM/ Frost School of Music. Joining in the celebration are the University of Miami’s FROST SCHOOL OF MUSIC BIG BAND and an ORLANDO-BASED GOSPEL CHOIR.

JAZZ ROOTS EDUCATION provides area music students and their teachers an in-depth look at the “behind-the-scenes” workings of a live sound check and the technical aspects necessary to produce a successful concert. Students will observe a live sound check, have a pre-show lecture with Chuck Archard about the music, the artistic process and the practical skills needed for a career in the arts. Additionally, the students will also receive an evening at the theater enjoying dinner and tickets to see Georgia On My Mind.

“This is going to be a great opportunity for students from the community to experience the inner workings of the performing arts and to dialogue with internationally acclaimed jazz musicians,” said Dana Brazil, Dr. Phillips Center for the Performing Arts School of Arts director of education.

The Walt Disney Theater at the Dr. Phillips Center for the Performing Arts

Mr. Rosen is a musician, producer, executive producer and co-founder of GRP Records, one of the industries premier record labels. Through his record productions, he has produced more than 350 albums, with more than 80 nominated for Grammy awards, winning 33 Grammys. Mr. Rosen is also the producer and director of many award-winning TV specials including, JAZZ and the PHILHARMONIC, An Evening with Dave Grusin, The GRP ALL-STAR BIG BAND LIVE, and more. He is currently producing a seven-part, multi-media project with hosts Quincy Jones and Phil Ramone titled RECORDING: The History of Recorded Music. http://www.larryrosen.com/

Mr. Rosen received Ernst & Young’s “Entrepreneur of the Year Award” in New Media and Entertainment, and has been elected to the GRAMMY Governor Honor Roll. He serves on the boards of the Dave Brubeck Institute, The Music for Youth Foundation, The Frost School of Music Steering Committee and with Dave Grusin is the founder of the National Foundation for Jazz Education. Mr. Rosen received an honorary doctorate from Manhattan School of Music in 2013.

The Dr. Phillips Center for the Performing Arts is a non-profit 501(c)3 organization dedicated to developing and operating a new state-of-the-art performing arts center in downtown Orlando, Fla. Opening in November 2014, the performing arts center will begin to fulfill its vision of Arts For Every Life®; to be a gathering place for creativity and discovery; a vibrant urban destination where artists, audiences and students will come to experience, explore and learn. The two-block community-gather place features the 2,700-seat Walt Disney Theater, 300-seat Alexis & Jim Pugh Theater, Seneff Arts Plaza, School of Arts, the DeVos Family Room, and other event rental spaces. Future expansion plans includes a 1,700-seat acoustic theater, rehearsal room and commercial development spaces. The Dr. Phillips Center is a public-private collaboration with the City of Orlando, Orange County, the State of Florida and generous donors. For more information or to see live footage from the construction webcam, please visit www.drphillipscenter.org