Puppeteer/Voice Actor extraordinaire NATE BEGLE discusses how he landed his dream role performing the iconic robot CROW in the all-new Mystery Science Theater 3000 Live: The Great Cheesy Movie Circus Tour  which will play Broadway In Chicago’s Cadillac Palace Theatre (151 W. Randolph) on October 5, 2019, for an exclusive one night engagement with the never-before-screened film No Retreat, No Surrender. For tickets and more information, visit www.BroadwayInChicago.com.

Following the wildly successful “Watch Out for Snakes! Tour” in 2017 and “30th Anniversary Tour” in 2018, Joel Hodgson, original host and creative vision behind the beloved TV and Netflix comedy series for more than three decades, will don the red jumpsuit one final time as Joel Robinson to host Mystery Science Theater 3000 Live: The Great Cheesy Movie Circus Tour alongside the world’s greatest – and only – movie riffing robots, Tom Servo, Crow, and Gypsy. 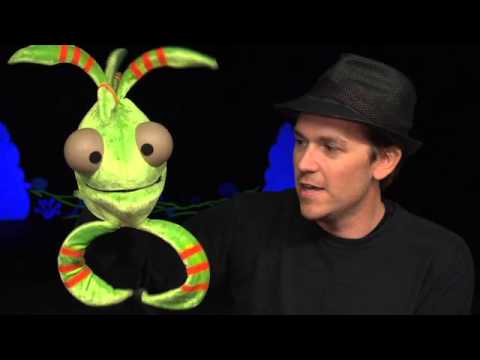 Nate Begle has puppeteered for film, TV, and stage. He has worked alongside and trained with colleagues from The Jim Henson Company, Sesame Street, Universal Studios and The Walt Disney Company, where he was an opening cast member in Walt Disney World’s new Muppet Show. For his voice work, in addition to the many commercials, video games, children’s shows and audiobooks, he can currently be heard as the promo voice and announcer for The Wendy Williams and Jerry O Shows! Nate is on record as saying, how much “MST3K is very much a part of who I am as a person and performer. It informed my sense of humor, and fed into my love of movies, comedy AND puppetry!”

For more than 30 years, the award-winning comedy television series “Mystery Science Theater 3000” (MST3K) has been known as one of the top cult TV shows of all time. The story of a human host and his robot sidekicks trapped aboard a satellite and forced to watch cheesy movies by their captors, MST3K has maintained its reputation thanks to its fervently devoted fan base, known as “MSTies.”

Created by Joel Hodgson, the first season of “Mystery Science Theater 3000” aired in 1988 on KTMA-TV in Minneapolis. Set on the Satellite of Love, the series follows a hapless host trapped by mad scientists on a satellite in space who is forced to watch some of the most outrageously unfortunate B-movies ever created. To keep sane, he’s built two robot sidekicks and together they do a running commentary on the films, affectionately mocking their flaws with inspired wisecracks and acting as a lively movie theater peanut gallery.

MST3K’s national broadcast life began in 1989 on the Comedy Channel (later to become Comedy Central), where it ran for seven seasons. The show’s final three seasons aired on the Sci-Fi Channel. Series creator Hodgson originally played the stranded man, Joel Robinson. When he left in 1993, series head writer Mike Nelson replaced him as the new B-movie victim and continued in the role for the rest of the show’s run. The format proved to be popular, and during its ten seasons and 197 episodes on Comedy Central and the Sci-Fi Channel, it attained a loyal fan base and critical acclaim, including a Peabody Award and two Primetime Emmy® nominations.

In late 2015, Shout! Factory and creator Joel Hodgson formed a new partnership, known as Satellite of Love LLC, to acquire the global IP rights to MST3K with the aim of producing new episodes and managing and developing the IP in other areas. The highly successful MST3K Kickstarter campaign to #BringBackMST3K, spearheaded by Shout! Factory and Hodgson, surpassed its goal by funding the production of 14 new episodes and set the world record as the highest-funded film and video crowdfunding campaign in history. The new episodes of “Mystery Science Theater 3000” debuted as a Netflix original series on April 14, 2017. Later in 2017, Netflix renewed the series for another season.

ABOUT BROADWAY IN CHICAGO
Broadway In Chicago was created in July 2000 and over the past 19 years has grown to be one of the largest commercial touring homes in the country.  A Nederlander Presentation, Broadway In Chicago lights up the Chicago Theater District entertaining more than 1.7 million people annually in five theatres. Broadway In Chicago presents a full range of entertainment, including musicals and plays, on the stages of five of the finest theatres in Chicago’s Loop including the Cadillac Palace Theatre, CIBC Theatre, James M. Nederlander Theatre, and just off the Magnificent Mile, the Broadway Playhouse at Water Tower Place and presenting Broadway shows at the Auditorium Theatre. Broadway In Chicago proudly celebrates 2019 as the Year of Chicago Theatre. For more information, visit www.BroadwayInChicago.com.Facebook @BroadwayInChicago ● Twitter @broadwaychicago ● Instagram @broadwayinchicago ● #broadwayinchicago