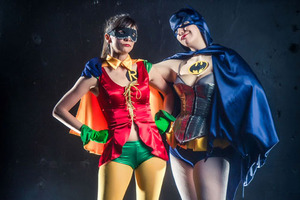 Everyone loves boobies, if you don’t, well there is something seriously wrong with you. I think there is a subconscious lust of boob flesh buried deep in all of us from the time we are infants and the nipple is our only source of nourishment.  I could be hours expounding on what it is about those luscious mounds we all love. However, there is no reason, we all love them, even gay men. We love them in all sizes, shapes and forms, some like them big, me personally I like a medium sized chest on an athletically build body. Why though, why should I spend forever on expounding the virtues of the bosom, can we not just except the pretext that boobies, tits, tah-tahs, jugs, breasts and our love of them is perhaps the one unifying factor that all humans can agree on? Let’s just except it and move on, humanity loves the boob.  And they are, on lovely display for all to see at Gorilla Tango’s Holy Bouncing Boobies: A Batman Burlesque.

The fact that we all love boobs is why I am confused. In most burlesque the teased revealing of the boobs, small ones, big ones, A-D cups is central to the show. Fantastic anticipation of that glance of girl flesh is what makes a Burlesque show great. I love the fact that Burlesque as an art form allows all body types in and recognizes the beauty of all women, not only the “typical” Hollywood beauty, but all women’s beauty no matter their shape.

This Batman burlesque confused me then because, burlesque being all about the boobs, why was it I found the strip tease a distraction? Don’t get me wrong, every single lady on stage was hot in the extreme. Yet still, the T-n-A played second fiddle to the show itself. Because OMFGawd, that was funny!!!!!!!!! (Yes that many Exclamation points are warranted.) I didn’t want to stop laughing long enough to be aroused sexually. Robin, could have never taken off an article of clothing and I would have been in love with her just the same, do not misunderstand me what she’s got underneath is amazingly beautiful, but it was not the reason I watched her with such glee. Never, ever, have I seen a Robin portrait with such brilliant energy, such perfect understanding of the characters complete Baffled disenchanted chagrin at the crime fighting world of Batman’s 1960’s person.

That is not to say every lady on stage last night did not fill the hall with laughter, but I cannot help in my mind coming back to Robin. Her delivery her energy dragged the show through it’s paces. When she finally snaps about the whole stupidity of everything; I mean seriously, Drinks are allowed, but be careful how much you imbibe, because when Robin hits her clarion call moments of sheer clarity, you may wet yourself with laughter. Yes, she was handed the best role, the easiest jokes but it’s her presence her delivery, her complete commitment to the role that makes her stand out, against the rest of the magnificent performers. Like I said, if she had never taken a sigle article of clothing off, she would have had me at, “Where the F**K, did egghead come from.” The shows humor is central to what makes this perhaps the most amazing Burlesque show I have ever seen, and I have seen a few. Gorilla Tango as an ensemble are great, though I do despair we never did get around to seeing Gordon take it off. Come on Comish, what’s up?

It is hard to review, humor, here is why. Though you want to tell your readers what kind of humor they are in for, however as most humor replies on the element of surprise, the disbelief that someone actually just said what they did. It is imperative not to give anything away. ‘Holy Bouncing Boobies’ is a send up of the 60’s era Adam West, Bert Ward, batman. It relies strongly on making fun of the utter, (Ha Pun!), cheesy camp of that era, let’s face it TV in ’66 was just bad, its why we love it but it is just bad, bad, bad, oh so bad. Gorilla Tango, uses every ounce of that badness to make you laugh. They even manage to bring shark repellent spray into the mix.  When batman tosses a can of tuna at cat women’s minions, or pulls a ball of Yarn to distract Cat Women from her utility belt, there is a prime example of the send up this show is, Robin “Utility Belt?” Batman, “Yup.”, Robin, “F##K that thing is useful.” Batman, “F##kin’, A!”  This short spoiler does nothing to give a true sense of the Brilliant mockery that is on display throughout the show, let’s not even get into the homo erotic tension between Bat’s and the Boy Wonder, gives a whole new meaning to Sliding down a Bat pole.

Let’s get back to the premise of this review, the awesomeness of the boobies. I know I diverted for a bit there, but honestly, though we all love the tah’s,  the greatest aspect of this show was the humor and not the jugs, I was so impressed with the “Writing” that the Boobies played second fiddle. On the real Robin call me… (Kidding.) Okay, onward and upward.  The Dance numbers are simplistically choreographed though I really did appreciate the slow-motion fighting in the background as the main villain is doing their tease in the foreground. Okay; batman’s Rouge’s Gallery is perhaps what the Caped Crusader is most loved so let’s get around to who appears in this adaptation of the “Dark Knight,” The Joker does appear, though the Riddle (One wow!! Is she an amazing beauty,) is the Key player. Dick Chaney, opps my bad, I mean the Penguin is also lurking “wha wha wha”, as is Egghead, seriously? Okay? WTF ever?  Two face shows, her faces,  I Honestly think her tease was the most well thought out,  in that they mixed two vastly different songs together to represent both sides of the coin, one of this particular villains greatest Ass’ets.  Then there was of course, Cat Women. Anyone with any knowledge of batman will be waiting on her, it’s a strip tease show after all an there is nothing sexier in the world of batman circa 1966 sexier than the cat suit wearing, pussy, known as Selina Kyle, and She deliver, Mee-ow, you will wait on her, you will be hopeful, and you will be satisfied, she is as scum-didelly-umpshis, as any incarnation of the Cat Women, Ever, in fact she may replace Michelle Phiffer as my all-time favorite. While Robin’s energy and presence on stage makes this show worth seeing more than once, Cat Women is the icing you just need to lick of the cake.

Okay I’ve been gushing, this show is worth gushing over! But there are a few gripes. One the plot, is that the Riddler kidnapped Bat Girl, yet we never see Bat Girl. Here is the thing about this, the Ladies of Gorilla tango do a magnificent job of Pulling out Batman’s rouge Gallery, but they are gender bending, the girls into male roles, Cat women is the only ‘eggs-ception’ (Ha, had to.) Bat Girl, would have been an opportunity to actually bring a bat man sex Icon to life on stage. Without any Gender bending needed. Further, to that point, there are females in Batman’s Rouge Gallery that they could’ve used without the gender bending. Harly-Quinn is the obvious choice, but since she did not join Batman’s Rouge Gallery until the 1990’s Cartoon she would not have fit the campy 60-‘s Motiff, Poison Ivy though? The Queen of Hearts. There are also a few technical issues with the show, the mixed songs are not entirely well mixed. But then again, who cares. The fact is the show is Amazing and will lift you spirits, beyond what one usually expects from burlesque you will laugh so hard, that you may strain yourself. And the girls, each one an amazing beauty in her own right will bring you to the point of drooling. Yes, the humor puts the boobies on the back burner, but they are wonderful in their own right.