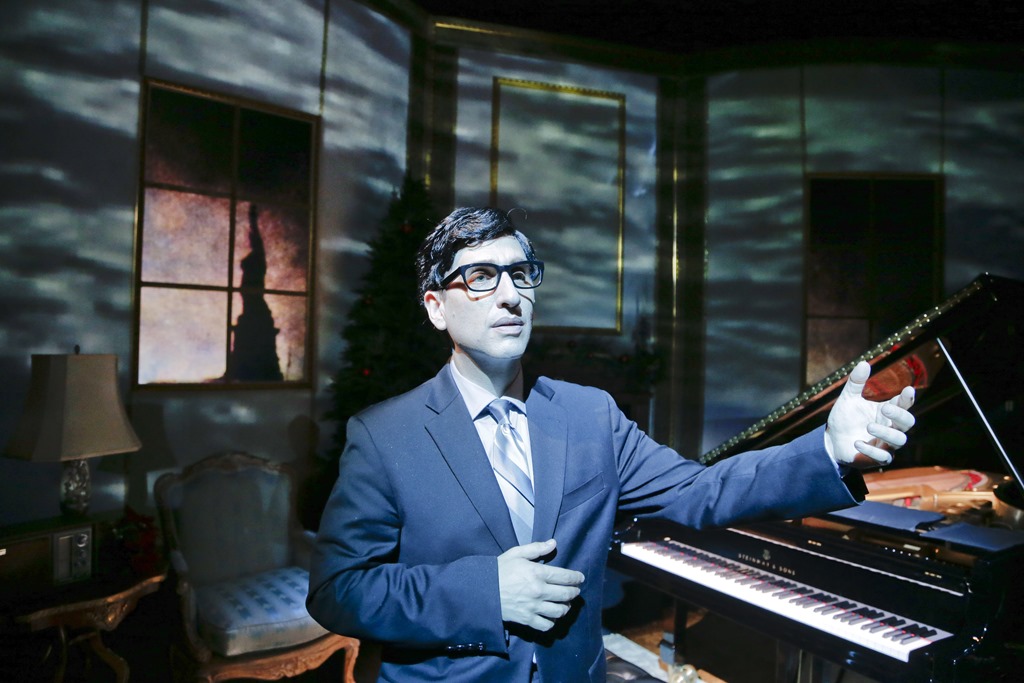 HERSHEY FELDER as IRVING BERLIN continues to break all box office records during its National Tour and has returned to Chicago this past Sunday for a limited, four-week engagement at the Royal George Theatre.

HERSHEY FELDER as IRVING BERLIN has previously played to rave reviews and broken box office records at Los Angeles’ Geffen Playhouse, Chicago’s Royal George Theatre, the La Jolla Playhouse and Boston’s Majestic Theatre. Jerome Kern famously said: “Irving Berlin has no place in American music – he is American music.” George Gershwin called him “the greatest songwriter that has ever lived.”   HERSHEY FELDER as IRVING BERLIN brings the man behind the iconic music to life in an evening reflecting his remarkable journey from child immigrant to America’s most beloved and prolific songwriter. From Tin Pan Alley to Carnegie Hall, from the Great White Way to The Silver Screen, and from the pop charts to the steps of the nation’s capital, Berlin’s music provided America with the soundtrack of a century. Mr. Berlin, a tiny, quiet, poor and shy immigrant from Russia, began his career at 11 as a singing waiter in Tin Pan Alley. He liked rhyming words and creating basic songs. Mr. Berlin was not trained in the piano even though his father was a cantor in Russia but in order to write his songs he discovered a piano with a special pedal to create basic syncopation. From here his career moved forward with the help of Music Secretaries.

This production begins with Israel Beilin, aged 8, 0n board the SS Rynland arriving at the port of New York for a life of freedom in a new land. When his cantor father died, Mr. Berlin left his family as there were already too many mouths to feed and found his way to Tin Pan Alley where he would become a singing waiter. His ideal composer had always been Stephen Foster and from that humble in all, Irving Berlin composed 232 top-ten hits and 25 number one songs, and over 1500 published songs. The evening ends with Mr. Berlin, now stooped with age and worries, finally realizes his causing and why he has composed so many beloved songs to Americans of all ages and when Mr. Felder gave us his rendition of Mr. Berlin’s “God Bless America” the stage was flooded with red, white and blue lights and this reviewer got chills as the audience sang along and knew all of the words; the America now forgotten.

Berlin’s songs – all of which had a sense of purpose – include his very first: “Marie from Sunny Italy, “Alexander’s Ragtime Band,” “Always,” (composed for his second wife Ellin MacKay-Berlin), “Blue Skies,”(composed for his daughter), “Count Your Blessings Instead of Sheep,” “Easter Parade,” “Heat Wave,” “How Deep is the Ocean,” “Puttin’ on the Ritz,” “Steppin’ Out with My Baby,” “What’ll I Do,” and the scores of “Annie Get Your Gun,” “Holiday Inn, “Easter Parade,” and “White Christmas,” and many more.

Having just read Lawrence Bergreen’s biography on Mr. Berlin: As Thousands Cheer (taken from his 1933 revue of the same name) I was extremely anxious to find out how Hershey Felder would interpret this great man and his work all within 90-miniutes; Hershey Felder is a totally unique performer who looks as though he is actually channeling whatever composer he is presenting. A superb musician and pianist Mr. Felder is one of the most accomplished actors in the world and thousands have cheered! From the first opening moments when he plays an old and a young self and invites the Christmas carolers into his home, Hershey Felder takes his audience on a magic carpet ride at once joyous and heart-breaking and patriotic and reminiscent of better times. Although a superb pianist, in this production he acts and sings more than he plays his grand piano – which he does so well. The set, in which Mr. Felder has found an exciting and theatrical formula is always changing through the use of lighting and projections. All of his scenic collaborators are at the top of their games!

HERSHEY FELDER as IRVING BERLIN is a STRICTLY LIMITED ENGAGEMENT through May 22, 2016. Immediately after the Chicago presentation there will follow a special One-Night Only New York presentation at The Town Hall, on June 6, 2016, to be broadcast internationally by the WFMT Radio Network with the entire Berlin family in attendance. All tickets are $60 and are on sale at The Royal George Theatre and may be purchased by calling 312.988.9000. Tickets may also be purchased at www.ticketmaster.com.