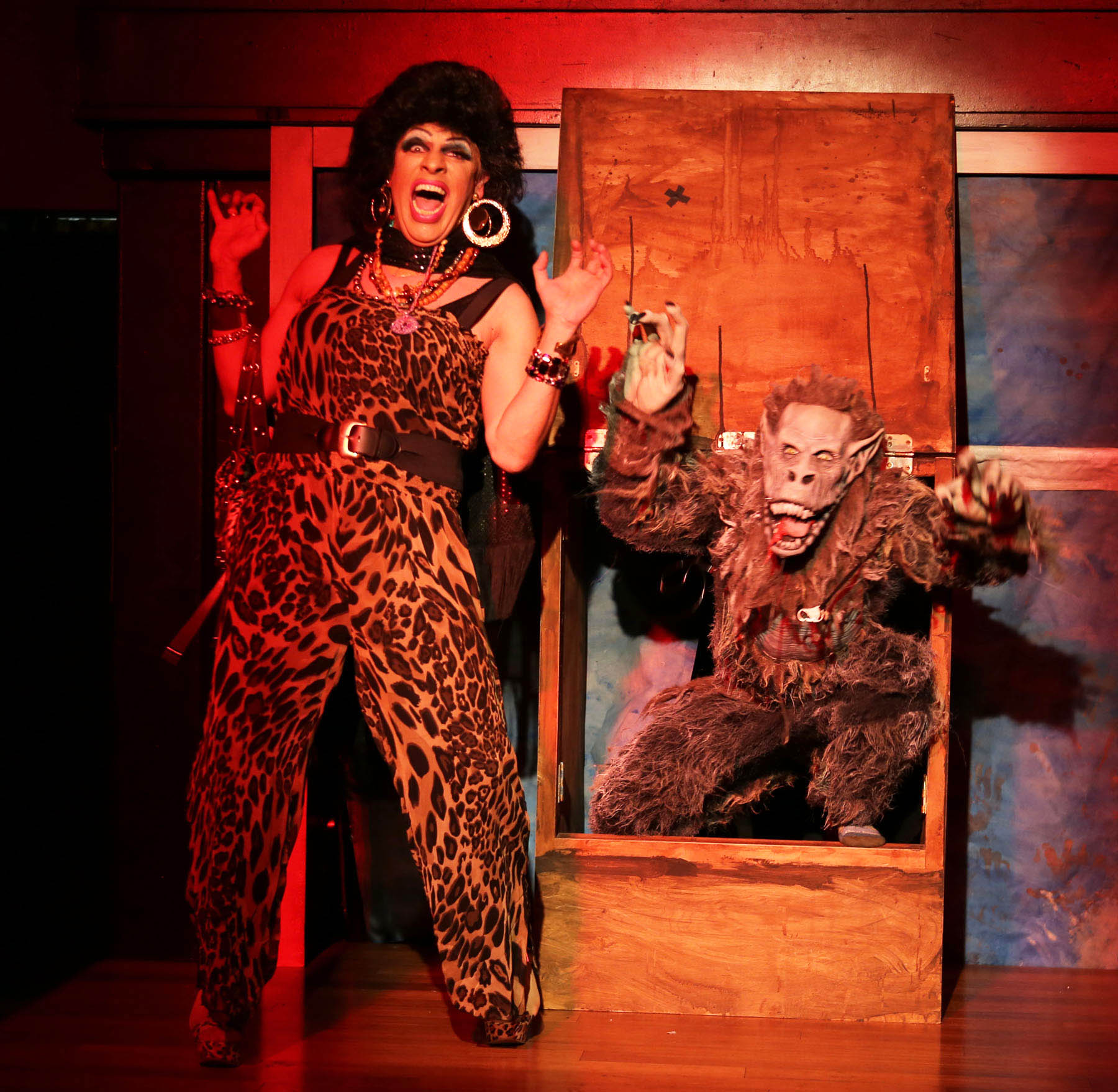 Hell in a Handbag Productions is pleased to continue its 2015-16 season with the world premiere of SCREAM, QUEEN, SCREAM!, a horror trilogy by David Cerda inspired by classics like Creepshow, Night Gallery and Tales From the Crypt, directed by Wm. Bullion. SCREAM, QUEEN, SCREAM! will play September 24 – October 31, 2015 at Mary’s Attic, 5400 N. Clark St. in Chicago’s Andersonville neighborhood. Tickets are currently on sale at www.handbagproductions.org.

Join the twisted ensemble at Hell in a Handbag Productions in a twisted trio of tales featuring possessed office temps, ravenous monsters and deadly identical twins. The horrors of office work are explored in the chillingly accurate TACO TUESDAY. A seemingly pleasant office temp (Rachel Hadlock) is not what she appears to be but nobody will believe Candy (Kristopher Bottrall), the office queen bee. Can Candy save her co-workers from the horrible fate that awaits them or will they suffer the wrath of the Office Master 2000?

Next up, Handbag Artistic Director David Cerda is featured in THE BOX – an even campier tribute to the already campy The Crate from the classic ‘80s film Creepshow. Cerda plays Betty Carr, a horrible shrew of a woman who pushes her long-suffering college professor husband (Chad Ingold) to the edge. When a box is found on campus grounds, the deadly contents give Professor Carr an even deadlier idea.
How do you top a monster in a box? How about Ed Jones as identical twin sisters?! SHUT UP AND DIE, MAGGIE! is a deliciously gothic tribute to the hag horror films of the ‘60s – a mash-up of the Bette Davis classics Hush, Hush, Sweet Charlotte and Dead Ringer, with a dash of Joan Crawford’s Strait Jacket (in the interest of equal time). It’s the story of identical twin sisters Maggie and Aggie Honeycutt – Maggie is the beautiful, carefree belle of the ball and Aggie is her much maligned, studious and level headed sister. When Maggie’s suitor, Beauregard Bullhorn (Chazie Bly), is viciously murdered, all fingers point to Maggie, who’s convicted and committed to the insane asylum. Twenty years later, Maggie returns home in search of peace and quiet, but certain forces have other plans for her. Can Maggie escape the demons of her past – or is she doomed to relive the horror of that tragic night?

Tickets: Previews: $16. Regular run: $22 in advance (Wednesday and Thursdays); $27 in advance (Fridays, Saturdays & Sundays); $30 at the door. Limited VIP reserved seating with drink $40. Tickets are currently on sale at www.handbagproductions.org.

David Cerda (Playwright) is a co-founder and Artistic Director of Hell in a Handbag Productions and has written POSEIDON! An Upside Down Musical, Rudolph the Red-Hosed Reindeer, Caged Dames, Lady X, SCARRIE The Musical, Christmas Dearest, The Birds, Lady X, and a few others. As an actor or he has worked with A Red Orchid Theatre, The New Colony, Corn Productions and Sweetback Productions. Cerda was also was a lyricist for an untitled animated feature film for Amazon Studios.

Wm. Bullion (Director) most recently directed the U.S. premiere of Blue Planet for Akvavit Theatre (of which he is currently a company member). Before that it was L’Imbécile for Babes With Blades Theatre Co., among others. Other Akvavit directing credits include Jon Fosse’s A Summer’s Day and an all-original burlesque satire Pippi’s Lost Stockings: A Skirt Raiser. As an actor, Mr. Bullion was most recently seen in old-lady drag (though he prefers “gran-vestite”) as Cecily in Factory Theater’s Hotel Aphrodite. Look for Billy’s work to appear again in Spring 2016 with Strange Bedfellows’ production of Viking-American.