Ghostlight Records will release the cast album of the new musical comedy RED EYE OF LOVE on Friday, September 16, 2016. The studio cast recording of the show – which is based on an original play by Arnold Weinstein, with music by Sam Davis and book and lyrics by Arnold Weinstein and John Wulp – features the Tony Award-winning Broadway star Kelli O’Hara (The King & I, South Pacific), Tony Award winner Brad Oscar (Something Rotten!, The Producers), and Josh Grisetti (Honeymoon in Vegas), in addition to a cast of Broadway favorites. The booklet includes studio photography, a synopsis and a special note from John Wulp. Starting on September 2, customers that pre-order the album on iTunes will receive an immediate download of the title track. To pre-order the physical album, please visit www.sh-k-boom.com/red-eye-of-love-studio-cast-recording. 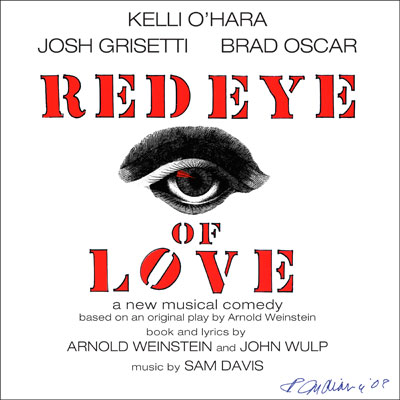 RED EYE OF LOVE is a girl-meats-boy love story. Selma Chargesse is torn between her love of great wealth and her passion for idealism and the two men in her life who offer her one or the other—Wilmer, a naïve young dreamer and O.O. Martinas, the proprietor of the world’s largest meat department store. Could she have both? Don’t miss this rare musical ready for prime time that tugs at the heart and tickles the funny bone.  Any way you slice it, this is red meat for musical theater lovers and that’s no bum steer.

“RED EYE OF LOVE is written in the language of burlesque using puns and allegory, word play and stock phrases to make its points,” says co-writer John Wulp. “It’s not a conventional musical. It is an extended metaphor – a history of America. The story of the rise of O.O. Martinas’ Meat Emporium roughly parallels the story of America, except that the play begins at the turn of the century – a time that could be encompassed within the lifetime experiences of Arnold Weinstein and myself.”

When RED EYE OF LOVE opened in New York City in September 2014 at the Dicapo Theater, The New York Times called it “what The Fantasticks might be like if it developed a social conscience.” It was praised as a “madcap musical” by Playbill, “enjoyable” by Theater Life and “amusing” by Talkin’ Broadway. Theater is Easy said “the score is a pastiche wonder that expertly brings to mind the stage shows of the early Twentieth Century” withCurtain Up calling it “a throwback to the post-Vaudeville escapist song and dance shows.”