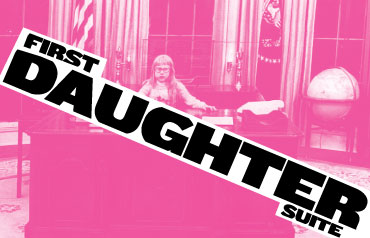 Ghostlight Records will record the original cast album of the world premiere musical FIRST DAUGHTER SUITE – written by Michael John LaChiusa – on Monday, October 26, to be released later this season. When the show opened earlier on October 21 at The Public Theater (Artistic Director, Oskar Eustis; Executive Director, Patrick Willingham), it was named a “Critics’ Pick” from The New York Times, “a little masterpiece” from The Wall Street Journal, “insightful and layered” by Newsweek and “sublime” by New York Magazine. Directed byKirsten Sanderson, FIRST DAUGHTER SUITE is running through Sunday, November 15. The album will be produced by Joel Moss,Kurt Deutsch and Michael John LaChiusa. To sign up for updates on the album, please visit: sh-k-boom.com/first-daughter-suite.

This recording marks The Public’s ninth album in collaboration with Ghostlight Records, including the previously released Bloody Bloody Andrew Jackson, Hair, See What I Wanna See, Giant, A Second Chance, Venice, Love’s Labour’s Lost and The Fortress of Solitude. This is also the label’s sixth album with Michael John LaChiusa (Giant, Queen of the Mist, See What I Wanna See, Bernarda Alba, and Little Fish).

Tony nominee Michael John LaChiusa imagines the inner lives and dreams of America’s best-known daughters with a funny and moving follow-up to his 1993 Public musical First Lady Suite. A historical fantasia in four parts, FIRST DAUGHTER SUITE follows Patricia Nixon and daughters Tricia and Julie, Rosalynn and Amy Carter, Betty and Susan Ford, Patti Davis and mom Nancy Reagan, and Barbara Bush and daughter-in-law Laura as they strive to live meaningful lives in the public eye, while dealing with the complex private relationships all of us face with our parents and children. Directed by Kirsten Sanderson, this wholly captivating new musical with a lush, sweeping score is a deeply felt new work about mothers, daughters and the surprising discoveries we make about one another as we grow.

Tickets are available by calling (212) 967-7555, www.publictheater.org, or in person at the Taub Box Office at The Public Theater at 425 Lafayette Street. The Library at The Public is open nightly for food and drinks, beginning at 5:30 p.m., and Joe’s Pub at The Public continues to offer some of the best music in the city.

ALISON FRASER (Nancy Reagan, Betty Ford) has appeared at The Public in Up Against It; and she has appeared on Broadway in Gypsy; Tartuffe; Falsettos; The Secret Garden; Romance/Romance; and The Mystery of Edwin Drood. Her additional Off-Broadway include In Masks Outrageous and Austere; The School For Lies; The Divine Sister; Love, Loss, and What I Wore; The Chaos Theories; an oak tree; and many others. Her film and television credits include Commentary, In the Blood, The Thing About My Folks, “Happyish,” “It Could Be Worse,” “Jack in a Box,” and many others.

RACHEL BAY JONES (Laura Bush, Rosalynn Carter) has appeared on Broadway in the recent revival of Pippin, Women on the Verge of a Nervous Breakdown, HAIR, and Meet Me in St. Louis. Her Off-Broadway credits include Hello Again with the Transport Group. On television she has appeared in “Louie,” and she has released a solo album, ShowFolk.

CAISSIE LEVY (Patti Davis, Julie Nixon) has appeared on Broadway in Hairspray, Wicked, HAIR, Ghost the Musical, Les Misérables, Off-Broadway in Murder Ballad, and in the National Tour of Rent. She has also released the solo album, With You.

THERESA McCARTHY (Robin Bush, Hannah Nixon) has appeared at The Public in Space and Saturn Returns: A Concert; and she has appeared on Broadway in Titanic. Her additional Off-Broadway credits include Cinderella-Cendrillon; Floyd Collins; Queen of the Mist; andThree Days to See. Regionally she has appeared in The Light in the Piazza,The Dumb Cake, and Stage of Independence. Her television credits include “House of Cards” and “Law & Order.”

BETSY MORGAN (Tricia Nixon, Susan Ford) is currently on Broadway in The King and I, and she has appeared in Les Misérables, A Little Night Music, The Little Mermaid, and High Fidelity. Her Off-Broadway credits include Found, The Fantasticks, and Bernarda Alba, and her television credits include “Flight of the Conchords.”

ISABEL SANTIAGO (Anita Castelo) appeared in The Public Theater production of Michael John LaChiusa’s Giant and in the National Tour of In The Heights. Regionally she has appeared in Vanya and Sonia and Masha and Spike, Little Shop of Horrors, Giant, Showboat, and West Side Story.

CARLY TAMER (Amy Carter) has appeared Off-Broadway in I Love You Petty and Favre and in the National Tours of Billy Elliot, How the Grinch Stole Christmas. Her film and television in We Are The Hartmans, Shadows & Lies, Honeysuckle, Children of Invention, “Sesame Street,” and “30 Rock.”

MARY TESTA (Barbara Bush) has appeared at The Public in The Knife, On the Town, Tartuffe, and See What I Wanna See. Her Broadway credits include Guys and Dolls, Xanadu, Wicked, Something Good, 42nd Street, Marie Christine, On the Town, Chicago, A Funny Thing Happened on the Way to the Forum, The Rink, Marilyn, and Barnum. Her additional Off-Broadway and regional credits include Oklahoma!; The Caucasian Chalk Circle; Queen of the Mist; Tricks the Devil Taught Me; Regrets Only; A New Brain, From Above; and many others. Her film and television credits include Big Stone Gap, Tio Papi, “Jack in a Box,” “2 Broke Girls,” “The Battery’s Down,” “Cashmere Mafia,” “Whoopi,” “Courage and the Cowardly Dog,” and many others.

BARBARA WALSH (Pat Nixon) has appeared on Broadway in Company, Hairspray, Big, Blood Brothers, Falsettos, Nine, Ragtime and her Off-Broadway credits include Three Days to See, Stars in Your Eyes, Birds of Paradise and Forbidden Broadway. She has appeared in the National Tours of Oklahoma!; Les Misérables; and Chess; and regionally in Company; Dinner With Friends; The Sisters Rosenweig; Side by Side; The Most Happy Fella; A Streetcar Named Desire; and many others. Her film and television credits include Life with Mikey; “Law & Order”; and “Law & Order: Criminal Intent.”

ABOUT THE PUBLIC THEATER:

The Public Theater, under the leadership of Oskar Eustis and Executive Director Patrick Willingham, is the only theater in New York that produces Shakespeare, the classics, musicals, contemporary and experimental pieces in equal measure. Celebrating his 10th anniversary season at The Public, Eustis has created new community-based initiatives designed to engage audiences like Public Lab, Public Studio, Public Forum, Public Works, and a remount of the Mobile Shakespeare Unit. The Public continues the work of its visionary founder, Joe Papp, by acting as an advocate for the theater as an essential cultural force, and leading and framing dialogue on some of the most important issues of our day. Creating theater for one of the largest and most diverse audience bases in New York City for nearly 60 years, today the Company engages audiences in a variety of venues—including its landmark downtown home at Astor Place, which houses five theaters and Joe’s Pub; the Delacorte Theater in Central Park, home to free Shakespeare in the Park; and the Mobile Shakespeare Unit, which tours Shakespearean productions for underserved audiences throughout New York City’s five boroughs. The Public’s wide range of programming includes free Shakespeare in the Park, the bedrock of the Company’s dedication to making theater accessible to all; Public Works, an expanding initiative that is designed to cultivate new connections and new models of engagement with artists, audiences and the community each year; and audience and artist development initiatives that range from Emerging Writers Group and to the Public Forum series. The Public is located on property owned by the City of New York and receives annual support from the New York City Department of Cultural Affairs; and in October 2012 the landmark building downtown at Astor Place was revitalized to physically manifest the Company’s core mission of sparking new dialogues and increasing accessibility for artists and audiences, by dramatically opening up the building to the street and community, and transforming the lobby into a public piazza for artists, students, and audiences. The Public is currently represented on Broadway by the Tony Award-winning Fun Home and Lin-Manuel Miranda’s acclaimed American musical Hamilton. The Public has received 47 Tony Awards, 167 Obie Awards, 52 Drama Desk Awards, 48 Lortel Awards, 31 Outer Critics Circle Awards, 13 New York Drama Critics Awards, and four Pulitzer Prizes. www.publictheater.org

The LuEsther T. Mertz Charitable Trust provides leadership support for The Public Theater’s year-round activities; Bank of America, Proud Season Sponsor of Shakespeare in the Park; The Harold & Mimi Steinberg New Play Development Fund at The Public Theater Supports the Creation and Development of New Plays; The Philip and Janice Levin Foundation – Lead Supporter of The Public’s Access and Engagement Programming; The Time Warner Foundation, Founding Sponsor of The Emerging Writers Group; Delta Air Lines, Official Airline of The Public Theater; New York Magazine is the official print sponsor of The Public Theater’s 2015-2016 downtown season; Public support is provided by the New York City Department of Cultural Affairs; the New York State Council on the Arts, a state agency; and the National Endowment for the Arts, an independent federal agency.