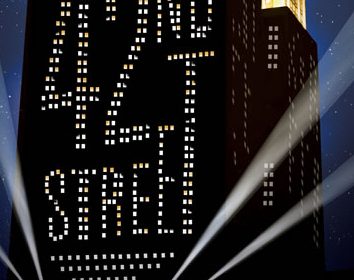 Drury Lane Theatre continues its 2017-2018 season with 42nd Street, with music by Harry Warren, lyrics by Al Dubin, book by Michael Stewart and Mark Bramble, and original Broadway direction and dances by Gower Champion. 42nd Street is based on the novel by Bradford Ropes and was originally produced on Broadway by David Merrick.  This production is directed by Michael Heitzman with choreography by Jared Grimes. 42nd Street runs October 26, 2017 – January 7, 2018 at Drury Lane Theatre, 100 Drury Lane in Oakbrook Terrace.

Tap through this year’s holiday season with 42nd Street, the 1980 Tony Award winner for Best Musical. In this Broadway favorite, aspiring chorus girl Peggy Sawyer lands a bigger break in New York City than expected. When the leading lady injures her ankle, Peggy gets the chance of a lifetime to rise from showgirl to star of a glitzy new Broadway musical. 42nd Street features show-stopping tap numbers and unforgettable hits such as “We’re in the Money,” “Lullaby of Broadway,” and “Shuffle Off to Buffalo.” Warm your Chicago winter with this love letter to the Great White Way.

Subscriptions for the 2017/2018 Season are priced from $149 to $181. Subscribers receive special offers on dining, flexible ticket exchanges, early notification and priority seating for added events. For more information, visit DruryLaneTheatre.com.

Under the leadership of President Kyle DeSantis and Artistic Director William Osetek, Drury Lane Theatre is a major force in the Chicagoland theatre scene, presenting world-class productions in collaboration with some of the nation’s leading actors, artists, writers and directors. Over the past 30 years, Drury Lane has staged more than 2,000 productions and has been nominated for more than 360 Joseph Jefferson Awards. Drury Lane is committed to breathing new life into beloved classics and introducing audiences to exciting new works.