FSCJ Artist Series to Present DANCING WITH THE STARS: LIVE! in January 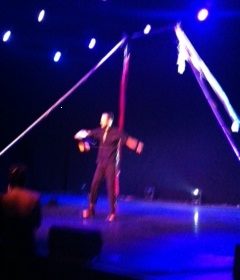 Dancing with the Stars, ABC’s leading entertainment show, produced by BBC Worldwide Productions, is bringing a one-of-a-kind touring production to Jacksonville on Sunday, January 4, 2015 at 8:00PM. The official 90-minute live show, DANCING WITH THE STARS: LIVE!, produced by Faculty Productions in association with BBC Worldwide, comes to the Times-Union Center’s Moran Theater for one night only, showcasing some of the faces from the show you know and love. Tickets are on sale now through the FSCJ Artist Series, sponsored by Chase, the official presenter of the Jacksonville show.

The all-new DANCING WITH THE STARS: LIVE! tour will feature a cast of the television show’s most popular competitors, treating audiences to exciting and romantic performances. Dancing with the Stars dancers will choreograph brand new never-before-seen numbers and re-create some of the show’s most memorable moments.

Tickets for DANCING WITH THE STARS: LIVE! in Jacksonville start at $50.19 and can be purchased at www.artistseriesjax.org, (904) 442-2929, and the FSCJ Artist Series Box Office between 10AM-5PM, Monday-Friday.

As announced during Monday’s broadcast, Mark Ballas and Witney Carson are the first two dancers revealed to be on the tour. Further announcements will be made throughout the season.

Mark Ballas said, “I’m looking forward to hitting the road and being able to perform live across North America. See you there!”

Witney Carson added, “I’m so excited to be a part of “Dancing with the Stars: Live!” I can’t wait to meet our fans and dance live for them!”

Dancing with the Stars airs Mondays, 8:00 p.m. (ET) on the ABC Television Network. Fans can checkwww.ABC.com/Dancing for full details on the DANCING WITH THE STARS: LIVE! tour.