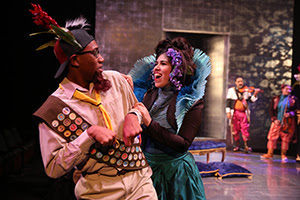 The signature program of the President’s Committee on the Arts and the Humanities (PCAH), the National Arts and Humanities Youth Program Award (NAHYPA) recognizes the country’s best creative youth development programs for using engagement in the arts and the humanities to increase academic achievement, graduation rates, and college enrollment. Chicago Shakespeare Theater’s CPS Shakespeare! is one of only 12 programs honored from across the country this year from a wide range of urban and rural settings.

Developed by Marilyn Halperin and stage and film director Kirsten Kelly, CPS Shakespeare!empowers an inter-generational ensemble of CPS students and teachers—guided and supported by a full team of CST theater professionals—to master Shakespeare’s difficult text and create a fully produced play on Chicago Shakespeare’s stage. A national model for immersive arts-in-education programming, the Theater launched the initiative in 2006 as a way to reach students with untapped potential from under-resourced schools who were at risk of “falling through the cracks” socially or academically, sometimes facing adversities of poverty, gang-related violence or homelessness. As a partner in literacy with CPS for over two decades, Chicago Shakespeare serves over 40,000 students annually, promoting the 21st century skills of reading proficiency, effective communication and cultural awareness.

In her prepared remarks for the White House ceremony, 16-year-old Jennifer Guadalupe Gonzalez shares, “CPS Shakespeare! has honestly transformed me. It has made me see who the real me is–and that’s someone who is goofy and full of energy. In our ensemble, we are all such different people, but yet there is no worry about other people judging you. We come from every part of the city, and we’re all from different cultures. This program has made me notice every person out in the world. We are all human beings with feelings.”