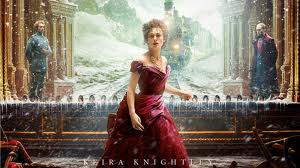 Director Joe Wright (Pride & Prejudice) along with screenwriter and master playwright Sir Tom Stoppard has created the most accessible adaptation of Leo Tolstoy’s famous novel “Anna Karenina” to date.  This is a sweeping production grounded more in legitimate theatre than film, where the truth is always at the core of the performances.  Mr. Wright’s production went through a chance of vision for this version of Tolstoy’s classic.  As the Hollywood machine reigns supreme, the initial vision had to give way to production budget cuts which effected location shoots.  Even with all the trials and tribulations the film encountered, this is still the definitive telling of the complex novel.  Mr. Wright’s favorite actress, Keira Knightly  plays Anna exactly as Leo Tolstoy had intended her to be, a victim of overwhelming passion, a woman who had lost herself to love, for whom the whole world had concentrated in her beloved Alexei Vronskiy (Kick Ass star Aaron Taylor-Johnson), and once she felt he had became tired of her, she simply could not and did not want to live. Ruth Wilson takes the role of Anna’s friend, Princess Betsy Tverskaya and just to see her performance is worth the price of admission.

In the film, as in the novel, Anna is away from her husband and son in order to help resolve a rift in her brother’s marriage where she meets by chance the dashing Count Vronsky. Having already resigned herself to a passionless life, counting the days until old age, Anna is completely unprepared for the romance which will soon overtake her. Abandoning cold husband Alexei, she runs away with Vronsky, but upon their return to Russia, Anna finds life as a social outcast too much to bear. Shunned by the people who were meant to be friends, paranoid about Vronsky’s seemingly waning passion, and desperately missing her son, Anna’s final act is somehow the fulfilment of her ultimate destiny.  The story is really a double helix, one pure fiction and one very real.

Cinemattically, the film is flawless with some scenes clinging to your memory including a great shot of Vronsky watching Anna through opera glasses, the lenses glowing with lust. Anna Karenina does well by its plot twists and  emotional trappings. Tom Stoppard’s dialogue is quick and crisp, the costumes are magnificent and the film as a whole swiftly moves along and Mr. Wright gets earnest performances out of his actors.

Matthew Macfadyen as Anna’s happily hedonistic brother, Kelly Macdonald as his perfect mate, Alicia Vikander as the virginal Kitty, Olivia Williams a frosty Countess Vronskaya. Taylor-Johnson’s Vronsky is the true find of the movie, giving depth and clarity to a role usually given to much weightier actors. Anna’s infatuation is the teenage crush she never got to have.

Anna Kerenina is an audacious undertaking culminating in theatrical gold and will surely be an Oscar contender on many levels, but none more salient the Mr. Stoppard who bring vibrant theatricality to an already colorful and moving classic piece of literature.