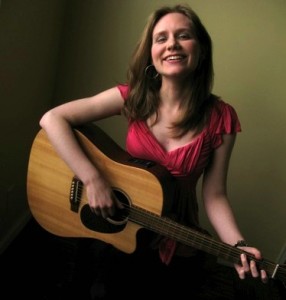 The Filament Theatre Ensemble is pleased to announce the next in its Music Mondays series, a concert series featuring local musicians that takes place on the first Monday of every month in their new performance space at 4041 North Milwaukee Avenue in Chicago.

On May 6 at 7pm, Chicago-based singer/songwriter Laura Joy will be performing a selection of mostly original material. Joy’s songs, voice and acoustic guitar style have been described as a blend of Joni Mitchell, Allison Krauss, and Ani DiFranco.

Before finding her way to Chicago in 2011, Joy worked the folk music circuit in New York City as well as her native Arizona. She released her first album, Six Flights, in 2008 and it’s follow-up, What I Know, in 2011. While in New York she was featured in the Jezebel Music Songwriter Showcase

at Laila Lounge in Brooklyn and opened for Nedra Johnson and Staceyann Chin. She was also one of the organizers and performers of the Paradigm Shift Event Series, a feminist-inspired art and performance series held across venues on the Lower East Side. She continues to tour around the country, as she puts it, “taking song requests from toddlers” and “quelling dark, angry bars full of ornery old Irishmen”.

Music Mondays, created and curated by the Filament Theatre Ensemble, is an ongoing concert series held the first Monday evening of every month and featuring local musical performers. In keeping with Filament’s mission to do theatre in a folk tradition with an emphasis on community, Filament is interested in bringing musicians whose story and music illuminate and celebrate the lives of the world in which they are a part. The concerts will be free (donations accepted) and will be held in Filament’s newly-acquired theatre space at 4041 North Milwaukee Avenue. Please join us May 6 at 7pm for another evening of good songs, good friends, and good fun.