BROADWAY MUSICALS: A JEWISH LEGACY Debuts on DVD from Athena May 7, 2013 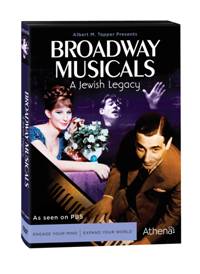 Engaging, humorous, and provocative, Broadway Musicals: A Jewish Legacy debuts on DVD from Athena on May 7, 2013. Broadcast on PBS in January 2013 and narrated by Tony® and Academy Award® winner Joel Grey, the film examines the leading role of Jewish composers and lyricists in the creation of the modern American musical and showcases the work of legends such as Irving Berlin, Jerome Kern, George and Ira Gershwin, Lorenz Hart, Richard Rodgers, Oscar Hammerstein II, Leonard Bernstein, and Stephen Sondheim. Alongside standout performances and archival footage, the film co-mingles cultural history with illuminating perspectives on the origins and meanings of some of Broadway’s most beloved songs, stories, and shows. The DVD 2-Disc set includes a bonus disc with three hours of bonus performances and interviews not

The film was produced, written, and directed by Michael Kantor, creator of the Emmy-winning series, Broadway: The American Musical..