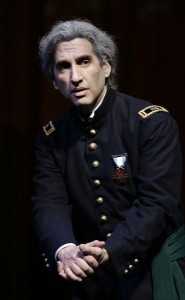 AN AMERICAN STORY features an original book and score by Felder and will be performed with a live orchestra.  Drawing upon the songs of great American composer Stephen Foster (Beautiful Dreamer, My Old Kentucky Home, and Oh Susanna), as well as President Lincoln’s own words, AN AMERICAN STORY is based on true events as seen through the eyes of a simple young man who suddenly found himself at the center of world history.

Set in New York City in 1932, 90-year old Dr. Charles Leale tells his true story as he travels back in time and recounts the events that changed his life forever 67 years prior. Felder stars as “Dr. Leale,” the 23-year-old unknown Union Army medic who was the first individual to reach the presidential box at Ford’s Theatre on the night President Lincoln was shot. Per the request of Mrs. Lincoln, Dr. Leale cared for the President throughout his final hours.  AN AMERICAN STORY is based on Dr. Leale’s account, LINCOLN’S LAST HOURS, as well as his original report from 1865, which created an international sensation when it was discovered amongst Lincoln’s papers in Washington, D.C. in June 2012.

Following this Chicago premiere, Felder will present a series of new productions at The Royal George Theatre, including I FOUND MY HORN, an import from the London stage starring Jonathan Guy Lewis (Soldier, Soldier; London’s Burning; Coronation Street). Written by author, journalist and playwright Jasper Reese and directed by Harry Burton, the touching comedy I FOUND MY HORN is the story of a middle-aged divorcee who finds a whole new reason to live by rediscovering his childhood French Horn. THE PIANIST OF WILLESDEN LANE, a critical and commercial success in Los Angeles and Boston, starring pianist and storyteller Mona Golabek,features the true story of her mother, a young concert pianist who survives World War II.  To conclude the season, Felder will be creating and presenting a new musical story about fathers and sons entitled LEM, starring Christopher Lemmon as his father, the stage and film star Jack Lemmon.

Hershey Felder is known to Chicago audiences for his productions of GEORGE GERSHWIN ALONE, MONSIEUR CHOPIN, BEETHOVEN AS I KNEW HIM, MAESTRO: LEONARD BERNSTEINand THE GREAT AMERICAN SONGBOOK SING-ALONG as presented on the stage of Chicago’s Royal George Theatre in the city that Felder will always consider home. Producing AN AMERICAN STORY at Chicago’s Royal George Theatre will allow Felder to recreate elements of Ford’s Theatre in the auditorium itself. Felder is well acquainted with the historic Ford’s Theatre, the site of President Lincoln’s assassination, due to extended appearances there in George Gershwin Alone in 2003 and 2004.

Felder’s other credits include Broadway, London’s West End: George Gershwin Alone (Helen Hayes Theatre, Duchess Theatre). Composers Sonata 1999 -2012 – George Gershwin Alone, Monsieur Chopin, Beethoven, As I Knew Him, and Maestro: The Art of Leonard Bernstein at dozens of theatres across the U.S. and around the world. He performed Monsieur Chopin for the Polish Ambassador to the United States and is the winner of 2007 Los Angeles Ovation Awards for Best Musical and Best Actor for George Gershwin Alone. Compositions include Aliyah, Concerto for Piano and Orchestra; Fairytale, a musical; Les Anges de Paris, Suite for Violin and Piano; Song Settings;Saltimbanques for Piano and Orchestra; Etudes Thematiques for Piano; and An American Story, for actor and orchestra.  He has presented worldwide live broadcasts of George Gershwin Alone. As director, Felder premiered Mona Golabek in The Pianist of Willesden Lane at the Geffen Playhouse in April 2012. He has been a Scholar in Residence at Harvard University’s Department of Music and is married to Kim Campbell, former Prime Minister of Canada.

The artistic team is led by Director Trevor Hay.  Scenic Design is by David Buess and Hay, Sound Design is by Erik Carstensen, Costume Design is by Abigail Caywood, Scenic Construction is by Matt Marsden, Lighting Design is by Chris Rynne, and Projection Design is by Greg Sowizdrzal and Andrew Wilder.

The performance schedule for Hershey Felder’s AN AMERICAN STORY is Wednesdays through Fridays at 8 p.m., Saturdays at 2 p.m. and 8 p.m. and Sundays at 3 p.m.  Tickets are $60 for performances on Wednesdays and Thursdays, and $65 for Fridays through Sundays. Tickets are now on sale at Royal George Theatre at 312.988.9000. Box office hours are 10 am – 6 pm Tuesday through Saturday. Tickets may also be purchased online at www.royalgeorgetheatre.com.