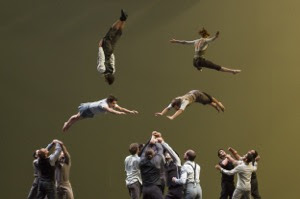 Among the highlights of Düsseldorf’s cultural event calendar this fall are two major annual festivals that differ in the art forms they present – one features nouveau-cirque and large-scale dance theater and global and classical music productions, the other pop and indie music – but have one thing in common:  they present the best of the unusual and boundary-pushing in the respective genres, artists and performances that are both unexpected and refined.  Discover very unusual nouveau-cirque at the 25th “düsseldorf festival!” (September 9 – 28, 2015) and very unusual pop and indie music at “New Fall Festival” (October 28 – November 1, 2015).

Düsseldorf, Germany – Düsseldorf is known as a place where you see and hear things for the first time.  The names and creations of many pioneers and mavericks who moved to super-stardom in art and music are connected to Düsseldorf.  Two major annual festivals celebrate the unusual and create a forum for the best artists in emerging art forms.   Don’t miss out on seeing the brilliantly new performances in nouveau-cirque and indie and pop at these two festivals:

This festival of new kinds of performance is so successful in finding fresh talent and shows every year that it turns 25 this year.  Join the special anniversary festival of fantastic nouveau-cirque, spectacular dancing and innovative music productions — and enjoy any of these program highlights:

The Band “Jambinai” combines Asian sounds with heavy-metal punk (9/13); “Dreamers’ Circus” creates magic by mixing Scandinavian folk and classical music (9/17); Cabaret artist Heike Beckmann presents a musical piece about a collection of toothbrushes from exes and male harems (9/21); Dance group “Borderline” performs its particular style that has been described as movements by dancers attached like puppets to invisible strings (9/22 and 9/23).

Düsseldorf’s New Fall Festival transcends boundaries of pop music for the fifth time this year, and it creates its particular magic of pop-music newness by curating the most unusual performers and productions and booking them in unexpected venues like the city’s top-notch classical music spaces, churches, and stages in fancy business hotels.

Düsseldorf’s tourism office is offering hotel and city specials for stays in 2015.  The package, called “Düsseldorf à la Card,” can be booked right from the tourism office’s website at https://www.duesseldorf-tourismus.de/en/accommodation/hotel-packages/duesseldorf-a-la-card/.  Prices start at €49 per night per person based on double-occupancy for a 2-3-star hotel in the city center and at €95 per person for a 4-star hotel.  The package includes breakfast, one DüsseldorfCard (free public transportation within city limits plus 30 free or reduced admissions to city attractions), and a city information package. Please check the website for current information.

Düsseldorf Marketing & Tourism GmbH is the visitors and convention bureau of the city of Düsseldorf.  Its responsibilities include tourism and city marketing, as well as conference and meeting marketing, hotel reservation services, fairs and convention services, city event ticket sales and advance ticket reservations.  For more information, visit www.visitduesseldorf.de.