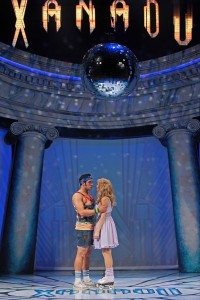 A musical works when the writers and the rest of the creative team know the entire scope of a production. What a show is and isn’t meant to be is crucial for its long-term staying power. Some musicals are meant not to be over thought and exist to allow the audience a chance to have a good time at the theater. Xanadu is the perfect example.

It was in 2007 when I first happened upon this show in New York, as word of mouth among industry people were saying this was the show of the season. I walked in to the Helen Hayes Theatre for the last preview and ninety minutes later, walked out a much happier and joyous person. That mood lasted a whole twenty minutes when I had to debate the merits of Xanadu with a well known New York “critic” at Sardi’s afterwards who refused to take part in the opening that was happening the next day. I explained it as best I could, but for some in the industry, it is like trying to defend Andrew Lloyd Webber; some just think musicals for the masses are gauche.

Well you can put me in the gauche column because this critic loves Xanadu. Why? Because what is onstage is what the creative team intended it to be; fun. To quote a line from the show, Xanadu is “children’s theater for 40 year old gay people”!   Alas, Xanadu is for anyone breathing.

The Broadway production also worked because of the phenomenal cast, including leads Cheyenne Jackson (who fills out denim shorts better than any mortal male), Kerry Bulter as Kira and scene-stealer Jackie Hoffman. The U.S. tour which premiered at Drury Lane Theatre at Water Tower, topped even the New York counterpart because of the incredible Elizabeth Stanley who brought amazing comic ability reminiscent of Lucille Ball to the role of the love-sick muse. Opposite her was Max Von Essen who is now on Broadway in EVITA. The tour faced some internal financial struggles and was not as successful as hoped for.

Forward three years and Xanadu has returned to the Drury Lane, this time in Oak Brook and under the direction of Rachel Rockwell, and is where it is meant to be. This is a solid production in every aspect, which on opening night had the audience rolling in laughter.

For those that don’t know the show, Xanadu is loosely based on the 1980 Olivia Newton John/Gene Kelly debacle. In the musical with a book by Douglas Carter Beane and music and lyrics by Jeff Lynne and John Farrar,nine mythical muses, all daughters of Zeus, have the task of inspiring humans to create great works of art. Cleo comes upon a mural artist, Sonny, and to blend into 1980’s Venice Beach, dons the guise of a roller-skating/leg warmer-wearing mentor, with an oddly familiar Australian accent who dons the name Kira. As Zeus decrees, the one rule muses must follow is that they will not fall in love with a mortal. Well, just like Bewitched, guess what happens?

Ms. Rockwell has assembled a mostly Chicago-centric cast with Gina Milo giving a hilarious turn as Kira. Gene Kelly’s movie role is now in the capable hands of the great Gene Weygandt who plays Danny, the real estate developer who was once mused but twice bitten by the money bug. New York actor Chris Critelli dons the tight, tight, tight denim shorts of Sonny Malone and actually resembles Mr. Jackson from the neck, up. Critelli has great on stage chemistry with Ms. Milo and the two ground their caricatures in an actor’s truth, which drives the morality side of Xanadu (and yes, there is a moral to Xanadu). Christine Sherrill and Nancy Voigts belt their way as the “evil” muses who cast a spell-o-love against their sister, damning her a very warm eternity. Sean Blake and Gary Carlson are also quite amusing as the Greek sisters who we would very likely find at Sidetrack on Musical Mondays. 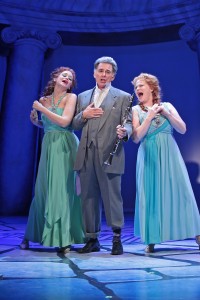 Musical direction by Roberta Duchak is fantastically crisp, with wonderfully fleshed out harmonies on some the 80’s most recognizable pop songs. Kevin Depinet and Jesse Klug work symbiotically with their scenic and lighting design, quite reminiscent of the original concept. Erika Senase’s costumes are akin to those on the early Lynda Carter Wonder Woman series when she visits Paradise Island and the Amazons are robed in vibrant primary colors.

The only misses in this production were the actual roller skating scenes in which most of the actors seemed very unsure of their movements (this is odd because, alas, Xanadu is part roller disco). More than that, the idea to include an intermission is absurd as it breaks the entire rhythm of the piece, so much so that the second act never regains the momentum of the first. Shows are written without an intermission for specific reasons, in which the creator’s intent should be followed. Examples include Man of La Mancha and more recently Assassins, both much longer show than Xanadu. A deliberate break in any of these shows undermines the intended pacing.

That aside, Xanadu is not to be missed. It is a great piece of entertainment, nothing more and nothing less. You might even get a small life lesson out of it; that is to follow your passion in life. For it is in that passion that we create, and like Kira so desperately yearns for, leave something good behind that we can be remembered for.

Xanadu runs through October 28, 2012 at the Drury Lane Theatre, 100 Drury Lane, Oakbrook Terrace, Illinois. Tickets and be purchased by calling the box office at 630-530-0111 or visit www.drurylaneoakbrook.com