Drury Lane’s CAMELOT – A Kingdom Stripped of Pageantry and Splendor 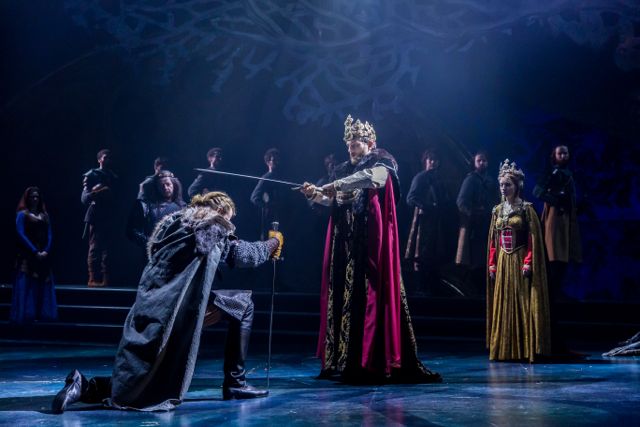 Drury Lane’s current offering of Camelot is not the one that Lerner & Lowe wrote. Director/Choreographer Alan Souza, making his Drury Lane debut was selected after the artistic team of Drury Lane saw a scaled-down production of My Fair Lady with only 10 people. When I read that I, believing that classic works are generally best without tampering with them, (though I admit the book of Camelot has many flaws) and that the creators knew what they were doing, red flags went up.

The original Camelot had a running time of over 4 hours and was eventually pared down to 3. When I saw that the running time for Souza’s production was 2 hours and 30 minutes with a fifteen minute intermission I was intrigued and concerned. This could either be great or disastrous.

Unfortunately, while not disastrous (and containing some great ideas) it is a seriously flawed production. Souza seems to feel that this production must be simplified so audience members can grasp his “concept”. This young, maverick director states that “Camelot isn’t a story about pageantry and elaborate medieval trappings”. “It is about an everyman who becomes king and really struggles…ultimately it about aspiring to our best selves…co-exists peacefully within the brotherhood of man.” While this is true he is picking and offering, like a cafeteria, what his production will be and minimalizing it down to a bare one with such an unbelievably fast pace it loses most of its moments, weakens some really fine performances and has the feel that they must finish before they have to pay overtime to the unions. This seems to be the trend with the big Equity houses (Marriott’s King & I suffering the same fate). It is effective if you have ADD but for me who enjoys a great story and score, it was mostly a big disappointment.

What Souza fails to see is that Camelot needs pageantry and spectacle in order to overcome a dense story and weak book. Although it may not be the case it appears that he does not have the skill or budget to give us the entire production as intended by Lerner & Lowe. Even though he worked with the Lerner & Lowe Estate on making changes to the book and drastically changing the score I can assure you that they are turning in their graves and, being the sticklers for detail they were known to be, would never have allowed this to happen to their work.

Whereas Rachel Rockwell was highly successful with the recent Brigadoon at Goodman (which also had a weak book and dense story which needed simplifying) she understood that it needed to contain the entire package; beauty, theme, relationships along with a grand scale and was wise to not monkey around with the music (like Ben Johnson did with the Camelot score).

King Arthur (played superbly by Ken Clark of House of Cards fame) provides the needed anchor for the show but we lose many of his moments because he is not allowed to slow down long enough to play them (a great disservice to this fine actor). This is especially noticeable at the end of the first act in the famous knighting of Lancelot scene. He is everything you would expect in the role; handsome, charismatic and captivating.

Christy Altomare’s Guinevere is not your typical one. It seems to also be a trend to take lyrical soprano roles and changing them to heavy mezzo ones. A fine actress and singer, Altomare’s voice is too harsh for the light, gentle songs that Julie Andrews (who originated the role) excelled in delivering. I also feel that chemistry is lacking between her and Clark which is critical to the success of the story.

A highlight in Camelot is Travis Taylor’s Lancelot Du Lac, who stops the show with the famous love song “If Ever I Would Leave You” (which brought the house down). With a vocal quality of Robert Goulet (the originator of the role) and superb acting skills he maintains the difficult French dialect throughout the entire show and delivers one of the strongest performances (although I would have shaved his beard as he looks more Scotch than French). The one thing he lacked was expressing the guilt at betraying his friend King Arthur by his affair with Guinevere.

The role of Mordrid, as played by Patrick Rooney, was not up to the level of the other leads. His Scottish accent went in and out and the character appeared even more underwritten than in the original book (it does not help him that the main song introducing his has been trimmed down). Rooney is a fine performer and I loved him in Drury Lane’s outstanding Next To Normal. I felt that he was out of place in this cast.

Director Souza has selected a strong ensemble of singers and dancers who bring a sexuality to his Camelot (he shows a lot of male flesh which provides a strong earthiness I found correct and refreshing).

Ben Johnson’s Musical Direction and rearrangement of the score damaged the lyrical beauty of the original score by removing the lushness and full orchestrations in exchange for minimal and often ugly arrangements consisting of only a few reeds or strings. The songs were also dissected, placed in between sections of dialogue and spoken which destroyed much of the poignancy, beauty and pageantry (bad word!) of the original score.

Scenic Designer Kevin Dupinet (whose work I enjoy) has designed a minimalistic set but wisely had the focal point as the big old tree which acted as the school room for King Arthur and Merlin (magnificently played by Jonathan Weir). The changing of the 4 seasons is beautifully designed and executed. There are some visually breathtaking moments in the production which seemed somewhat out of place with the overall concept of baring it down.

The Costume Design by Maggie Hoffman was a mixed bag. Following Souza’s instructions she provided a design lacking any real beauty or opulence. It appears that Camelot has fallen on hard times. Queen Guinevere’s gowns lacked sleeves which are not period appropriate for this era or rank. Women of her class would never show their arms as this was considered vulgar and low class. I thought the skimpy costumes for the women in the “The Lusty Month of May “number looked more like ones from Lil Abner than Camelot and were just plain historically wrong. I have the feeling that they wanted to give it a modern “hip” look which, in my opinion, does not do service to a show set in the 13th century. I never felt we were in the correct era.

I was also disappointed in the lack of any subtlety and variety in this production; it was a subtle as a sledgehammer. It was also particularly annoying that at the end of every song they hit the person with a spot to signal the audience to applaud (much of which was weak).

While most will probably find this a revolutionary and great Camelot if you are one of those who cherishes the beauty of the original then I suggest you stay away. You will be disappointed and leave feeling shortchanged. I did.