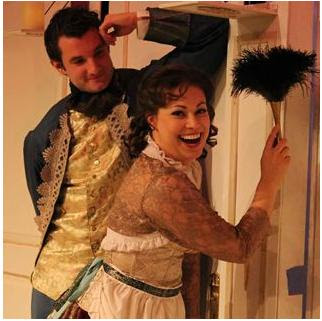 Set in 18th Century Paris, “The Game of Love and Chance” tells the story of Silvia and Dorante, who are engaged to be married but have never met. On paper they are a perfect match, yet each wants to be sure the other is worthy of marriage. To get a better idea of the type of person Dorante is, Silvia trades places with her servant and confidant Lisette; while unknown to her, Dorante has the same idea and trades places with his valet Harlequin. Despite mayhem and social taboos, true love ultimately resolves all in this comedy of manners.

Director Charlie McGrath (Associate Member, SDC) holds a BS in Drama from Northwestern University and certificate degrees from the American Musical and Dramatic Academy and British American Dramatic Academy.  She is a Collective Member of the Dead

Playwright Pierre Carlet de Chamblain de Marivaux (1688 –1763), a contemporary of Molière, is considered one of the most important French playwrights of the 18th century, penning numerous comedies for the Comedie-Francaise and the Comedie-Italienne of Paris. “The Game of Love and Chance” (“Le Jeu de L’Amour et du Hasard”) is considered one of his most important works. While “The Game of Love and Chance” was not one of Marivaux’s favorite works, it achieved immediate success and was his most popular.

Adaptor Stephen Wadsworth, has been a freelance director of opera and spoken theater for three decades, working at the Metropolitan Opera, Teatro alla Scala, Royal Opera Covent Garden, Vienna Staatsoper, Nederlandse Opera, Edinburgh Festival, and in venues in San Francisco, Los Angeles, Toronto, and Santa Fe. He has translated numerous works for the stage, including those by Monteverdi, Handel, and Mozart; and the French government honored him with a Chevalier de l’Ordre des Arts et des Lettres for his work on Molière and Marivaux. Wadsworth is a Grammy nominee, a Harman/Eisner Artist in Residence at the Aspen Institute, a 2013 Sundance Theatre Lab playwriting fellow, twice a Seattle Opera Artist of the Year, a Rainier Club Artist Laureate and the director of the opera studies artist diploma program since 2009 at Juilliard.

Dead Writer Theatre Collective presents two benefit performances of “The Game of Love and Chance” at the Stage 773 Cabaret, 1225 W. Belmont Ave. Oct. 14 and 15 at 7:30 p.m. Seating is general admission. Tickets are $40 (includes a complimentary glass of wine). For tickets visit deadwriters.net.
Dead Writers Theatre Collective seeks to transport audiences into the original world of the play through extensively studied period appropriate settings, props and costumes.  This strict attention to detail and high level of aesthetics is a hallmark of the Collective.

The Collective, under the leadership of Artistic Director Jim Schneider and Managing Director Bob Douglas, is a Chicago-based 501 (c ) 3 non-profit arts collective comprised of directors, designers, actors and playwrights and educators with a mission is to produce works either by or about dead writers. Past productions have included Jane Austen’s “Emma,” Noel Coward’s “The Vortex,” Brenda Kilianski’s “Loos Ends: A Hollywood Memoir,” Adam Pasen “Tea with Eddie and Fitz,” (winner of the Broadway World Award for Best New Play of 2013) and Oscar Wilde’s “Lady Windermere’s Fan.”