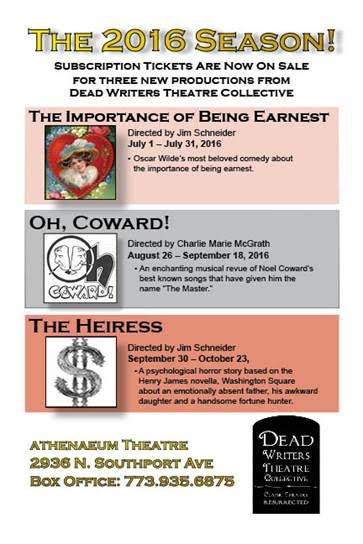 The 2016 season for the Dead Writers Theatre Collective at the Athenaeum Theatre will include “The Importance of Being Earnest” directed by Jim Schneider on July 1–July 31, “Oh, Coward” directed by Charlie Marie McGrath on August 26–September 18, and “The Heiress” directed by Jim Schneider on August 29–October 23.  These plays will be produced at the Athenaeum Theatre, 2936 N. Southport, and tickets are now available at their box office, 773-935-6875. The Collective is now also offering audience members many other information and entertainment events through their new Director’s Club.

“We’ll be showcasing three very different viewpoints on the theme of ‘Mad About The Boy,” states Collective Artistic Director, Jim Schneider. “We’re starting with an elegant romantic approach to a comedic classic, following through with a wonderfully witty musical, and then wrapping the season up with a nail-biting horror story.”

The Importance of Being Earnest, a farcical comedy by Oscar Wilde, was first performed in 1895. The plot revolves around the main characters pretending to be someone else to avoid social obligations.  “This production will literally unfold as a Valentine onstage,” says Schneider who will personally direct the show. “We’ll be taking you back to the days of Victorian England.”

Oh, Coward! is a musical revue in two acts that contains the songs as well scenes and sketches from many of Noel Coward’s plays. This will be director Charlie Marie McGrath’s first main stage production for the Dead Writers Theatre Collective. She has previously directed three of their chamber shows.

“The Heiress” is a 1947 play by American playwrights Ruth and Augustus Goetz adapted from the 1880 Henry James novel Washington Square. Set in the 1850’s, this psychological horror show revolves around an emotionally absent father, his plain and awkward daughter and a handsome fortune hunter.  “Basil Rathbone was nominated for a Tony Award as best actor in the first production,” states director Schneider. “The costume designer, Mary Percy Schenck, won the Tony that year for her efforts. We’ll be working to bring that same level of quality to all aspects of this production.”

Single tickets for all shows are now available for $40 at the Athenaeum Theatre Box Office, 773-935-6875.  Seasons tickets are also available that let you see all three plays for $90.  “You’ll save $10 per show,” states managing director Bob Douglas. “Plus, we’ll pick up the $5 box office surcharge.”

This year, the Dead Writers Theatre Collective is also launching their Director’s Club for $240.  “Members will receive the same benefits as season subscribers plus receive beverage vouchers and invitations to three Live Learning Events as well private home salons, and a special holiday collective cocktail reception along with great gifts such as a Dead Writer’s coffee mug and tote bag as well as a Noel Coward CD,” state Douglas. “It’s a tremendous entertainment offer that is also tax deductible to $150!”

Dead Writers Theater Collective was founded in 2011 to provide an up-close involving experience in original productions. Presenting plays that are by or about dead writers, they create highly detailed, period authentic realism in an intimate space. Everyone in the audience has a front row seat to take part in a grand-scale productions.  To find out more, contact: Dead Writers Theatre Collective, 1143 West North Shore Avenue, Chicago, IL 60626.  773-305-8221. bob@deadewriters.net