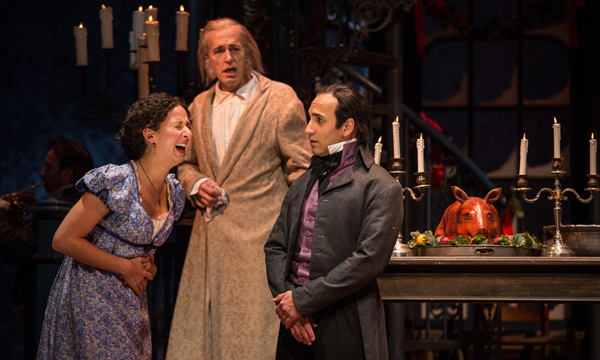 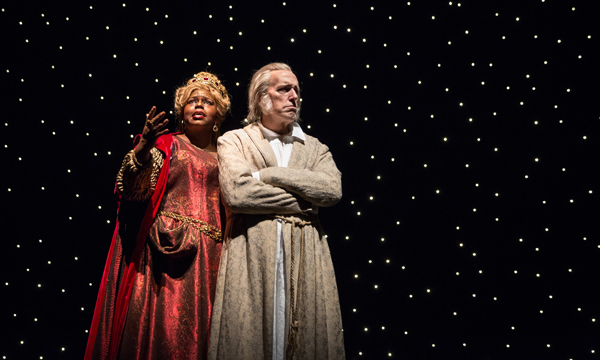 For the past 37 years The Goodman Theatre has annually brought Charles Dickens’ classic “A Christmas Carol” to its stage. To be honest, I have never had the opportunity to see this masterpiece in the many years the production has been there. However, I can finally say that I am delighted that I did not miss this wonderful production. I have no doubt that over the years the direction, sets and, special effects have changed. There is also little doubt that all of these elements add up to make “A Christmas Carol” an enjoyable experience for all.

Over the years, I have read the story, viewed many stage versions of “A Christmas Carol” and have viewed some movie depictions.  All of which appeared to be very dark and a little frightening.   Let’s face it, the story is dark.  It is about a bitter miserly man, Ebenezer Scrooge who wants to inflict his unhappiness on everyone. He wants no part of Christmas until he is visited by Spirits from Christmas past, present, and future to show Mr. Scrooge that he needs to change his ways. If not, the rest of his life will have terrible consequences.

The Goodman Theatre production of “A Christmas Carol” tells the story but manages to do it in a lighter, more interesting way. It begins with a Narrator, (Kareem Bandealy) who begins with a bit of comedy relief in telling the story. This production continues to move in this manner throughout the performance with the entire cast and ultimately with Scrooge (Larry Yando).  Even though, the audience witnesses the abrupt frightening entrances of the spirits, every so often there is a funny line or movement which lightens the mood.  Oddly enough, it works. The production continues to move effortlessly enhancing the story. As Scrooge sees the spirits he is in fact shocked, but then his reaction becomes somewhat comical in his disbelief.  At first, it made me wonder about the motives of Director, Henry Wishcamper. But after I gave it further thought, I believe that the direction is a stroke of genius.  After all, it is the holidays where everyone is joyful and not looking for gloom and doom. The theatre is a place where you want to escape from all of the bad news around us. Especially during the holidays.  Directing a lighter version of “A Christmas Carol” removes some of the darkness and diminishes some the terror for the younger audience members. The direction is successful and makes this an enjoyable theater experience for everyone.

Another successful element is Larry Yando’s portrayal of Ebenezer Scrooge. He is absolutely wonderful. His character goes from a miserly curmudgeon, to a frightened vulnerable old man, to a person who wants to mend his past mistakes. Larry Yando’s transitions are natural and wonderful. It illustrates his flexibility and talent to show Scrooge’s ability to move from his disbelief and terror to the absurdity of all that he is witnessing. I can honestly see why this production of “A Christmas Carol” and Larry Yando as Scrooge, has endured for 37 seasons. It works!!!!!

The scenic design and special effects are outstanding. The scenic design by Todd Rosenthal is beautiful and brings “A Christmas Carol” to life.  The special effects with Sound Designer, Richard Woodbury and Lighting Design by Keith Parham are fantastic.  The appearances of the spirits were ominous and spectacular. The entrance of the Ghost of Jacob Marley, played by Joe Foust who mysteriously appeared though a painting over Scrooge’s bed, and honestly scared the daylights out of me. The lighting produced the real eerie effects of the ghostly images.

I was especially impressed with the entrance of the Spirit of Christmas past. In the other productions of “A Christmas Carol” that I have seen over the years, the Spirit of Christmas Past is an older gentleman dressed in a long white robe with a long white beard. Director, Henry Wishcamper chose to cast Travis A. Knight as a hunky, handsome Michael the Archangel replica who flies through the stage to create his character. The Spirit then takes Scrooge on his journey in flight as well. It is a wonderful change for this Spirit, and he is easy on the eyes. The Spirit of Christmas Present is played by Lisa Gaye Dixon is a delightful character who manages to create the Christmas spirit by throwing glittered confetti to spread the spirit. She then attempts to show Scrooge that Christmas can be enjoyable even when some families are experiencing challenges. The Spirit of Christmas Future was amazing. It is an ominous figure that is approximately 25 feet tall on stage replicating the Grim Reaper. This effect successfully created the grim reality for the story.

“A Christmas Carol” is an enjoyable experience from start to finish. The music and the strolling musicians bring the holiday mood to the story which create a festive compliment to this production.     “A Christmas Carol” at Chicago’s Goodman Theater is in its 38th season and I believe will continue for many more holiday seasons. I’ll have to say that I am going to make this my traditional holiday theater outing. It is truly a holiday treat, and a must see.