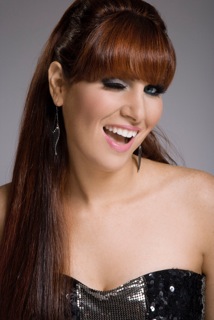 The gay dance label D1 Music stepped into Top 40 territory last year with Born Tonight, their first pop album release from singer/songwriter Shara Strand. The ten-track ep yielded “Jekyll or Hyde” and “I Will Carry You”, a song that climbed to #23 on Billboard’s Dance Club chart.  This week, the label prepares to strike again with a third single from their resident pop princess, “RSVP”. This latest brings Strand into D1 Music’s party territory.  It’s a fun and fresh – with a dash of sexy – dance floor-ready anthem that celebrates the animal nature of clubbers as they prowl the floor for their next prey. “We all know what we want, so why not go for it?,” laughs Strand of her latest song. Shara Strand’s “RSVP” is available on iTunes now.
“’RSVP’ is the perfect complement to the Born Tonight ep,” continues Shara Strand.   “Born Tonight was filled with beautiful live music and production, singer/songwriter type songs with deep meaning and lots of powerful vocals. With the new song, I aimed to solidify myself as an artist by letting my hair down and releasing a powerhouse dance anthem. ‘RSVP’ gives a happy dance break I think we all could use today.”
The song was executively produced by Peter McLean of D1 Music with additional music production by Keith Kemper.  Satya H.K. Wright provided creative direction and A&R.  Lyrics are by Mike Greenly and music by Jim Papoulis, who also produced “RSVP” with DJ Tony Smith (Soulbeats NYC).
“I usually like to have fun during recording sessions, but working on ‘RSVP’ was an especially good time because we had this huge and talented team in the studio with so many different levels of energy,” explains Strand.  “Tony would be giving music direction to engineer Rick Kwan while Peter and Keith would be offering vocal notes and Satya would be dishing out performance ideas – all at the same time.  It was chaotic, but in the best possible way!”
Strand was excited to record the song because she says she can relate to its message.  “I’ve always been the type of person who knows what she wants and goes for it. If I see someone I want to talk to on the street, I’ll start a conversation. As a matter of fact, some of my most significant relationships came to fruition because I literally walked up to a cute stranger on the street and made my move.”
And if her boldness didn’t grab attention, Strand says she would try a multiple tactics.  “My advice if they’re not biting is mix it up.  Shock them! We all have the power to reinvent ourselves.  We may even surprise ourselves in the process.”
Reinventing herself is exactly what Strand is doing with “RSVP”, a much groovier track than anything she has recorded previously.  “I learned from Born Tonight that if you’re with the right team, you can try new things and thrive as an artist.  At D1 Music, my point of view is listened to and respected. I have never had that experience before, and it’s helped me to grow. I have found my voice and learned how to make music I can be proud of.”
Strand studied musical theater at NYU and originally aspired to be a Broadway star. Her incredible vocals caught the attention of Peter McLean, who signed Strand to his D1 Music label. Always on the forefront of championing music for edgy and independent artists, D1 Music’s claim to fame had been with producing today’s major dance acts. With Shara Strand, the label broadened its pop appeal. “Keith Kemper and I created a vital and powerful D1 Music pop sound that spotlighted Shara’s amazing vocals,” says McLean.   Now he’s ready to launch her into dance.
“I can’t wait for RSVP to come out this summer,” Strand says.  “It’s such perfect timing, too.  Summer is when people have no fear and are willing to try things they normally wouldn’t. Including me.  I’m going for it!”
Shara Strand’s “RSVP” is available on iTunes.  Visit D1Music.co