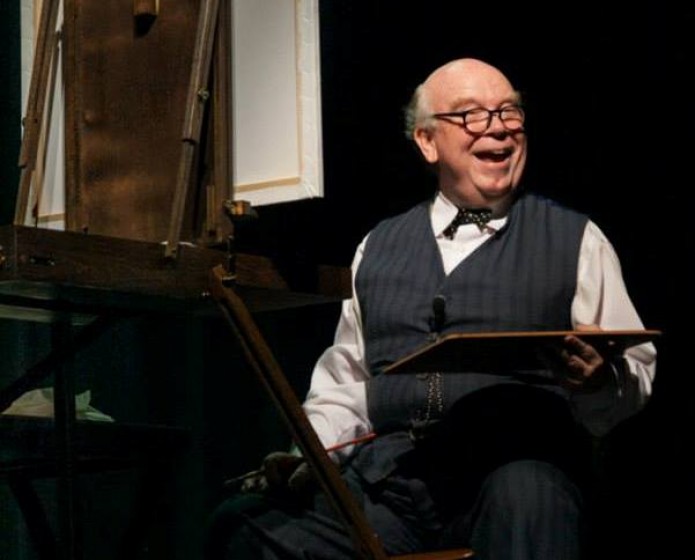 In my personal experience one person shows are almost always doomed to fail. Granted there are exceptions to the rule like the late Elaine Stritch’s one woman show At Liberty chronicling her life-long battle with alcohol and career in the theatre which was riveting. The ingredients for its success were a damn good story told by a legendary, larger than life star who could command an audience. One the same note I saw Piper Laurie, one of the world’s greatest actresses fall flat in her portrayal of Zelda Fitzgerald in her one-woman show. The reason? There is no true conflict or point of view.   The actor has only the audience to bounce off of.

Churchill is Influenced by a teleplay by noted Churchill scholar and historian Dr. James C. Humes, Keaton’s play has the look and feel of a docudrama/history lesson.  Because of that ,I never became emotionally engaged or connected with his Churchill but sat an observer. As Churchill, Keaton has his bag of brilliant acting tricks but the story itself lacks the emotional punch to make the show and character resonate.

His play chronicles the life of Winston Churchill, the legendary politician and Prime Minister, up until 1948, covering both World Wars and their aftermath. We witness a shrewd politician possessing great wit as he regales his stories.

I kept thinking what a fascinating show this could become if we had Stalin and Roosevelt join Churchill and have the action centered around the famous meeting of the three world leaders during World War II. Then you have 3 strong, diverse personalities locked in a truly life and death scenario – conflict. I remember one of my teachers, the legendary playwright Edward Albee saying “show don’t tell” and through Churchill I heard his voice echoing this.

I wanted to hear less and see and feel more. Much of the play he focused largely on the more humorous aspects of Churchill and his legendary one-liners, delivered them with great comic timing. What was missed was the emotional depth of the old, tired lion that made difficult choices and paid dearly for them through being demonized, ostracized and rejected.

I never believed the deep scars and hurt he felt at being brushed aside by his father and mother who affected him strongly nor the deep love for his deceased wife (this play takes place in 1948). I felt he skimmed the surface and did not take the time to make the emotional connections or move us in any way.

I also walked away asking what was this play about? What was the theme? It is true there were many messages in it but it lacked a spine and reference point that makes it stage worthy. Knowing much history myself about Churchill I did not learn anything new or earth shattering and was hoping to see into this larger than life legend and what made him tick.

Director Kurt John’s is a director whose work I have seen and greatly admire. However from a directorial stance much of the job is defining the emotional landscape complete with peaks and valleys that will keep an audience engaged. Opening night many of Keaton’s friends filled the audience and were very supportive (he got a standing ovation) – you could feel the love and admiration for this talented Chicago actor.

The projection designs of Paul Deziel were a highlight of the evening and provided a slick, professional patina to the show. They also provided a lovely backdrop for the action of the piece.

For older audiences who remember Churchill, Keaton will be very entertaining and for the younger he may provide a history lesson. I sincerely hope that he will glean more depth from his script and allow us to see more of the frailties of human being rather than the historical legend.   I also hope he will get leather soled shoes as the squeak of the rubber when he walked was distracting (Churchill never wore rubber soled shoes in his life).

Churchill plays August 1 – September 14 at The Greenhouse Theater Center, 2257 N. Lincoln Avenue. Performances are Thursdays-Saturdays at 7:30 pm and Sundays at 2:30pm. Tickets are $25-$35 and can be purchased at the Greenhouse Box Office at 773-404-7336 or online at boxoffice@greenhousetheater.org. For Calendar Information and reviews visit TheatreInChicago.com