Chicago Shakespeare Theater (CST) celebrates the culmination of the 30th Anniversary Season with GALA 2017 on Friday, June 9, 2017 at the Theater’s home on Navy Pier, and offers attendees a first look at the Theater’s dynamic new performance venue in-progress—The Yard at Chicago Shakespeare. Dinner and the event program will take place in the soon-to-be completed theater, giving attendees an exclusive preview of the innovative new space before the first production is presented in September 2017.

Funds raised will benefit the Tony Award-winning theater’s Chicago Shakespeare in Classrooms and Communities initiatives—which includes the Theater’s nationally recognized education programs and Chicago Shakespeare in the Parks tour. Through the generosity of Headline Sponsor Northern Trust, the Lead Consortium, the Host Committee and the advocacy of CST’s Board of Directors, the Theater has already raised $1.2 million of a $1.55 million goal. Leading GALA 2017 are honorary co-chairs Mayor Rahm Emanuel and Amy Rule and event chairs Carole and Gordon Segal. 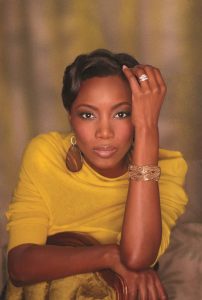 Five hundred attendees from Chicago’s civic and cultural community will enjoy the first look at The Yard, which will feature a one-night-only performance featuring Broadway leading ladies Heather Headley and Jessie Mueller.

Tony and Grammy Award-Winner Heather Headley is best known for her roles as Nala in the original Broadway cast of the hit musical The Lion King and performing in the title role in Aida, for which she won the Tony Award for Best Actress in a Musical. Headley has released three Grammy-nominated studio albums and in 2009 was awarded a Grammy for Best Contemporary R&B Gospel Album. In 2016, she returned to the stage in the London premiere of The Bodyguard and back to Broadway for the Tony-winning revival of The Color Purple.

Broadway favorite Jessie Mueller brings her talents home to Chicago after her Tony and Grammy award-winning performance as Carole King in Beautiful – The Carole King Musical. Muller most recently led the cast of Sara Bareilles’ hit Broadway musical Waitress(nominated for a Tony, Drama Desk and Grammy Award). Other Broadway credits include Nice Work if You can Get It, The Mystery of Edwin Drood (Drama Desk Nominations) and On A Clear Day You Can See Forever (Tony and Drama Desk nominations). She returns to the Chicago Shakespeare stage once again after her performances in The Three Musketeers, the original musical How Can You Run With a Shell on Your Back? and Barbara Gaines’ Henry IV Parts 1 & 2, which also toured to the Royal Shakespeare Company.

During GALA 2017, attendees will get an exclusive first look at the in-progress theater of The Yard at Chicago Shakespeare. The Yard redefines the traditional, fixed relationship between artist and audience—offering a radically versatile theatrical platform. Repurposing the footprint of Navy Pier’s former Skyline Stage with an enclosed, year-round theater space, this third performance venue connects to Chicago Shakespeare’s two existing spaces—the Courtyard Theater and the theater Upstairs at Chicago Shakespeare—through expanded lobbies. The forward-thinking, innovative design features a series of mobile towers that allow the space to be configured in a variety of shapes and sizes, with audience capacities ranging from 150 to 850. The new space enables the Theater to expand its programming, host a wide range of international productions, and double its service to students and teachers. The Yard will open its first production—a limited engagement of James Thierrée’s The Toad Knew from France—in September 2017.

Proceeds from GALA 2017 will support the Theater’s Chicago Shakespeare in Classrooms and Communities initiatives that annually serve over 100,000 students, teachers and family audiences. Every year, CST’s Team Shakespeare  programs introduce more than 40,000 students to Shakespeare in performance, and have positioned the Theater as a partner in literacy to Chicago Public Schools (CPS) for over 20 years. Chicago Shakespeare in Classrooms and Communities also encompasses the annual citywide summer tradition, the free-for-all Chicago Shakespeare in the Parks. This summer, 25 free performances of Romeo and Juliet will tour to 18 Chicago Park District locations throughout the city’s culturally diverse neighborhoods, July 26–August 27, 2017—activating public spaces across the city and breaking down real and perceived participation barriers to the arts.