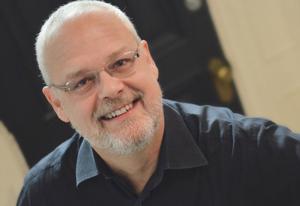 Elmer joins CHF with more than 25 years of experience in public programming, musical performance, and teaching. Elmer is Professor of English at Indiana University, Bloomington (IU) and Director of the College Arts and Humanities Institute (CAHI), which serves as the public face for the arts and humanities on campus, funding research in a variety of fields, and organizing a wide array of public lectures, exhibitions, and performances. He earned a B.A. from Yale University and a Ph.D. from University of California, Berkeley.

“Jonathan’s extensive background as a professor, humanist, artist, and writer made him a fantastic choice for the position,” said CHF Board Chair Clark Hulse. “We are excited that his vision and leadership will help attract the world’s great artists and thinkers to CHF as we enter our next 25 years.”

Elmer has published widely on all periods of American culture and literature, and on figures as various as Thomas Jefferson, Richard Wright, and Jeff “the Dude” Lebowski. He is a leading expert on the writings of Edgar Allan Poe, and his current research explores how the notion of “play” fundamentally transformed the art, culture, and business of the 20th century. As CAHI Director, he’s brought an eclectic array of programs to IU including leading cartoonist Chris Ware, video game designer, critic, and researcher Ian Bogost, and literary giant Margaret Atwood.

Elmer is also an accomplished trombonist, and has recorded with Bang on a Can in New York. He has shared the stage with jazz greats Dizzy Gillespie and Benny Carter, has performed Antillaise “compa” all over France, and jazz with Darius Brubeck in London and South Africa. He is currently a member of the Postmodern Jazz Quartet based in Bloomington, IN.

As the new Marilynn Thoma Artistic Director for CHF, the largest organization of its kind, Elmer will leverage his background as a scholar, passionate humanist, and avid musician to lead the organization as it enters its 26th year.

“Working with the Chicago Humanities Festival is an extraordinary opportunity,” says Elmer. “For a quarter of a century, this great civic venture has brought the best in ideas and cultural expression to a wide audience. The ways we participate in artistic and intellectual life are transforming themselves before our very eyes. I couldn’t be more excited to help CHF to bring new work and new perspectives to growing audiences.”

Phillip Bahar, CHF Executive Director said, “Jonathan has developed an array of exciting humanities initiatives on IU’s campus, bringing smart ideas to a broad audience. His role with the Chicago Humanities Festival will enable him to bring those innovative and exciting initiatives to a larger stage here in Chicago.”

Elmer will begin work on March 2, succeeding Matti Bunzl, Emeritus Artistic Director, who left Chicago to become director of the Wien Museum in his hometown of Vienna, Austria. Elmer and his wife, Alexandra Morphet, split their time between Bloomington and the Lakeview neighborhood in Chicago.

CHF also announces the promotion of Alison Cuddy to Associate Artistic Director. Formerly the Program Director, this new position allows Cuddy to focus on developing new institutional partnerships, programs, and connections to the broader Chicago community. In 2014, CHF partnered with more than 60 cultural, civic, and educational organizations, and continues to work with the city’s leading institutions.

Cuddy joined CHF last spring and prior to her arrival, she spent more than 10 years at WBEZ 91.5 FM. There she helped launch Odyssey, a nationally syndicated talk show of arts and ideas, hosted the flagship morning program Eight Forty-Eight, and reported on arts and culture. She currently hosts Strange Brews, a podcast about the culture and community around craft beer.

“I look forward to working with Jonathan on deepening the Chicago Humanities Festival’s relationships with our numerous partners and taking our programming to audiences throughout Chicago and its many neighborhoods,” said Cuddy.