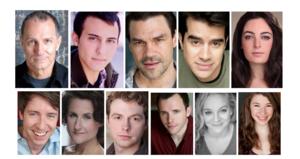 You’re not dreaming a dream. Aurora’s Paramount Theatre, wower of audiences and critics this season with consecutive smash hits CATS, Mary Poppins and The Who’s Tommy, is closing its 2014-15 Broadway Series with LES MISERABLES, one of the greatest musicals of all time, March 18-April 26, 2015.

For tickets and information, go to ParamountAurora.com, call (630) 896-6666, or visit the Paramount box office Monday through Saturday, 10 a.m. to 6 p.m., and two hours prior to evening performances. LES MISERABLES is rated PG.

Last week on his blog, Corti revealed his “formidable, all-star cast” writing, “Ricky Falbo, currently a knock out on our stage as 10-year-old Tommy, is mighty street rebel Gavroche. Little Eponine is Savannah Groh who matures into the Eponine of fantastic, soulful Lillie Cummings, featured as Sally Simpson in Tommy. Little Cosette is Nicole Scimeca, Gretl in Lyric Opera’s The Sound of Music. Golden voiced Erica Stephan is Cosette, and her Marius is Devin DeSantis, who is currently thrilling and rocking audiences as Tommy himself!”

“Nicholas Foster richly voices the humble, ardent Bishop of Digne. Lancelot of Drury Lane’s recent Camelot, terrificTravis Taylor makes his Paramount debut as handsome, fiery Enjolras, galvanizing the students of The June Rebellion in Paris of 1832. George Keating returns and Marya Grandy makes her Paramount debut to create an evil portrait of The Thenardiers. In gorgeous, raven-haired Hannah Corneau, seen in our Fiddler on the Roof, is a leading lady of remarkable vocal beauty, Fantine. Our handsome, brooding Javert, Rod Thomas, will stun with his powerful baritone as a black-hearted and very human soul, at once righteous and lost.

“Naperville native, New York actor, Robert Wilde is our leading man in the impossible role of Jean Valjean. A supremely gifted and compelling singer of extraordinary range and actor of staggering prowess and vulnerability; this is a very exciting occasion for Robert’s return to Chicago Theatre. He is in a word, superb.”