In celebration of outstanding achievement in high school musical theater performances, Broadway In Chicago is thrilled to announce the award recipients of the Seventh Annual Illinois High School Musical Theater Awards sponsored by NBC 5: Darian Goulding of Hampshire, IL (Hampshire High School) as BEST ACTOR for his portrayal of “The Beast” in BEAUTY & THE BEAST and Natalie Doppelt of Deerfield, IL (Deerfield High School) as BEST ACTRESS for her portrayal of “Sister Mary Robert” in SISTER ACT. Darian and Natalie will represent the state of Illinois at The Jimmy® Awards (also known as The National High School Musical Theatre Awards™) in New York on June 25, 2018.York Community High School was awarded Best Production presented by Guardian Music Travel for their production of TUCK EVERLASTING and Crystal Lake South High School was awarded Best Scenic Design presented by SPL, celebrating excellence in scenic design, for their production of PETER PAN. Rebecca Marianetti was awarded the Best Direction Award for her direction of York Community High School’s production of TUCK EVERLASTING. 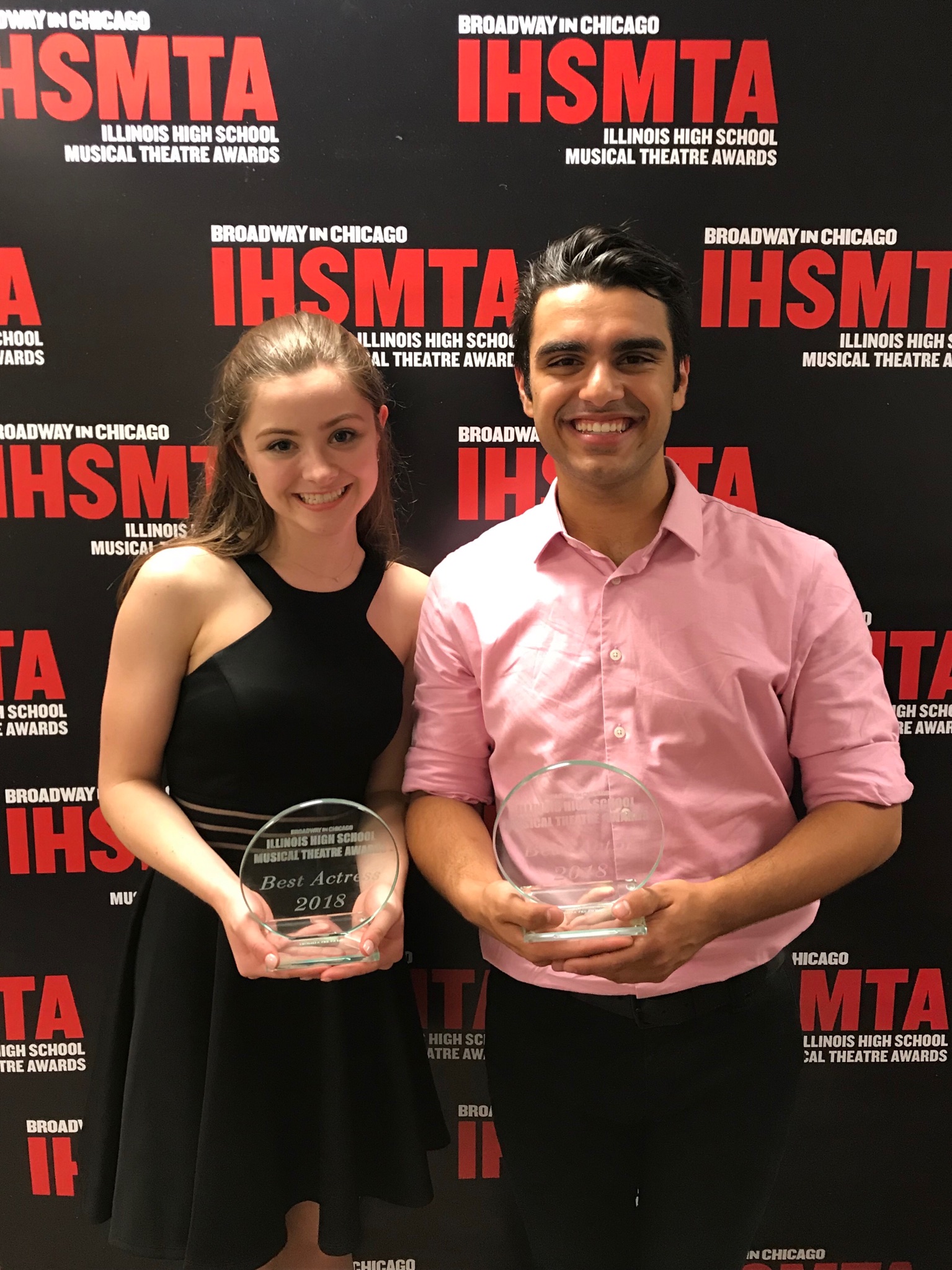 On Monday, June 4, Broadway In Chicago crafted a full day of workshops with theatre professionals for twenty-four nominees that culminated in a performance on stage at the Broadway Playhouse at Water Tower Place. During the day, nominees auditioned for a panel of casting agents and theater professionals who chose the recipients of performance awards.

Darian Goulding and Natalie Doppelt will be sent to New York City, on an all-expense paid trip, for a week-long theatre intensive of coaching and rehearsals with industry professionals in preparation for a one-night-only showcase, where they will represent the state of Illinois at The Jimmy® Awards on Broadway, on Monday, June 25, 2018. The Jimmy® Awards are named for legendary Broadway theater owner and producer James M. Nederlander. Broadway In Chicago is a Nederlander presentation, and is excited to join the network of theatres across the country participating in The Jimmy® Awards.

ABOUT THE JIMMY AWARDS
The Jimmy® Awards/The National High School Musical Theatre Awards™ (NHSMTA) impacts more than 100,000 students who participate in high school musical theatre competitions sponsored by presenters of Touring Broadway productions throughout the United States.  A Best Actress and Best Actor winner from each of these competitions is sent to New York for a week-long theatre intensive of coaching and rehearsals with industry professionals in preparation for a one-night-only showcase on Broadway, where a panel of judges crowns the nation’s top performers. Named for Broadway impresario James M. Nederlander, the program has been the catalyst for more than $2,000,000 in educational scholarships.

In 2012, the program inspired preeminent broadcaster WGBH Boston to produce a 3-part documentary series called “Broadway or Bust,” which follows students on a journey from their hometown competitions to their debut on Broadway. The series remains popular viewing at www.pbs.org. For more information, please visit www.JimmyAwards.com.

ABOUT OUR SPONSORS
NBC 5 CHICAGO
NBC 5 (WMAQ-TV) is the owned NBC station in Chicago. Originally WNBQ, the station’s current call letters, WMAQ-TV, were established in 1964. During NBC 5 Chicago’s rich history, the station pioneered a number of television “firsts.” On April 15, 1956, NBC 5 became the world’s first all-color TV station. In September of 1986, NBC 5 became the first Chicago commercial station to broadcast in stereo. In 1989, NBC 5 was the first Chicago station to present closed captioning of all local newscasts. Currently, NBC 5 airs over 37 hours of local news per week in HD on its core channel and the latest news, weather and streamed original content onNBCCHICAGO.COM and the NBC Chicago Mobile App.

GUARDIAN MUSIC TRAVEL
Guardian Music Travel is a company that specializes in student group travel across the United States and abroad. This educator founded and operated company provides the finest service in the industry at the best price.  The company has thrived using its model of teachers working with the Guardian staff of educators to create custom itineraries and wonderful educational experiences.  Guardian’s theatre groups have loved the New York City packages including Broadway shows and workshops with professional and teachers. For more information, visit www.gmgtravel.com.

SOUND, PRODUCTION & LIGHTING
Sound, Production & Lighting (SPL) is a full-service event production and system installation company.  We provide production services for corporate meetings, galas and fundraising parties, marketing activations, and anything between – we’re always up for a challenge. We offer permanent installation services for a variety of venues in fields such as live performance, education, worship, and hospitality. Our goal for any project is to provide an unparalleled experience and service. https://www.splchicago.com/

ABOUT BROADWAY IN CHICAGO
Broadway In Chicago was created in July 2000 and over the past 18 years has grown to be one of the largest commercial touring homes in the country.  A Nederlander Presentation, Broadway In Chicago lights up the Chicago Theater District entertaining more than 1.7 million people annually in five theatres. Broadway In Chicago presents a full range of entertainment, including musicals and plays, on the stages of five of the finest theatres in Chicago’s Loop including the Cadillac Palace Theatre, CIBC Theatre, Oriental Theatre, and just off the Magnificent Mile, the Broadway Playhouse at Water Tower Place and presenting Broadway shows at The Auditorium Theatre of Roosevelt University.