Broadway In Chicago, the producers of HEARTBREAK HOTEL, and Authentic Brands Group (ABG), owner of Elvis Presley Enterprises today, are delighted to announce the full casting for HEARTBREAK HOTEL, a musical premiere that will ignite the stage of the Broadway Playhouse at Water Tower Place (175 E. Chestnut) beginning June 30, 2018.

Chicago’s ‘King of Rock and Roll’ will be Eddie Clendening who originated the role of Elvis in the acclaimed production of HEARTBREAK HOTEL at the Ogunquit Playhouse. Broadway World called Clendening’s performance at the Ogunquit “spectacular.” The Portland Press Herald says, “Clendening channels Elvis’s unforgettable vocals with an uncanniness that brings thrilling goose bumps…” and the Boston Post Gazette hails, “[Clendening] is able to rock out with the raw energy of Presley while always retaining that shyness that made him so charming.” 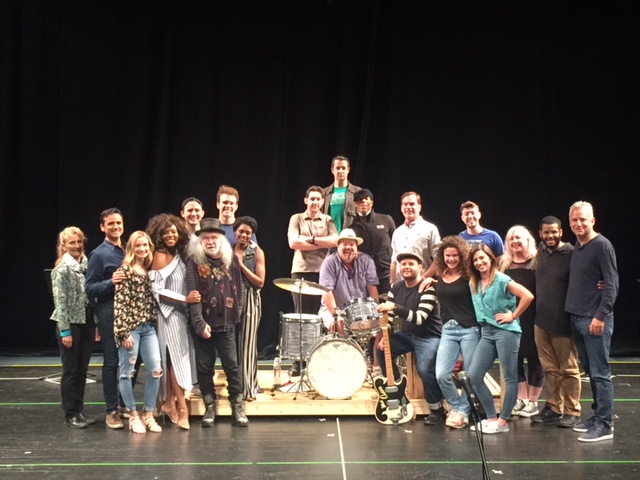 HEARTBREAK HOTEL follows the tender story of Elvis Presley in the early years of his career as he and Sam Phillips create the music that will forever change their lives. As Elvis’s career skyrockets, both lifting and shattering the lives of those he loves, a secret love story is revealed, a betrayal is discovered, and “Colonel” Tom Parker changes the course of history, all in just 18 short months.

This brand new musical features hit songs from the King himself as well as the legends who influenced his iconic music, with chart-toppers including “Blue Suede Shoes,” “Tutti Frutti,” “That’s All Right,” “Shake, Rattle and Roll,” and, of course, “Heartbreak Hotel.” This is where the story begins… “take a walk down lonely street.”

“We are thrilled to debut this amazing cast,” said Producer Scott Prisand of Robbins Lane Entertainment. “This production will feature cast members who have been with the show from the beginning, such as our original Elvis, in addition to unbelievable talent from Chicago. HEARTBREAK HOTEL is ready to rock this town!”

CAST BIOGRAPHIES
EDDIE CLENDENING (Elvis Presley) Eddie Clendening originated the role of Elvis Presley in the Broadway production of Million Dollar Quartet, where he performed eight shows a week to packed houses, for over 2,200 performances! In addition to playing Elvis in the Chicago production of Million Dollar Quartet at the Apollo Theater, Clendening played the ‘King of Rock and Roll’ in the original production of Heartbreak Hotel at the Ogunquit Playhouse in Ogunquit, Maine.

Eddie has toured extensively as a vocalist/guitarist with his own group, “The Blue Ribbon Boys,” throughout the United States, Europe, Asia and Australia. He has appeared on several coast to coast, prime time and regional television programs including The Late Show with David Letterman, Late Night with Jimmy Fallon, The View, and The Today Show. He has also been a regular voice on various satellite/AM/FM/internet radio programs. He’s played alongside rock-n-roll greats like Scotty Moore, James Burton, Jerry Lee Lewis, Dale Hawkins and scores of others. With several popular recordings released, his albums “Eddie Clendening Is… Walkin’ And Cryin’,” “Eddie Clendening Is… Knockin’ At Your Heart,” and “Eddie Clendening Is… The Rage of the Teen-Age!” have received critical acclaim.

GENO HENDERSON (Jackie Wilson, BB King, Ike Turner & Others): A veteran of the L. A. music scene, Geno has toured, recorded and made television with The Gap Band, The Pointer Sisters, Billy Preston, Roberta Flack, Smokey Robinson, Sly Stone and many others. In 2011, he originated the role of Jocko Henderson on Broadway in Baby It’s You.

MATT CODINA (Scotty Moore): Matt Codina is a California-based guitar player, vocalist and artist most known for his fingerstyle approach popularized by Chet Atkins, Merle Travis and Scotty Moore. Matt originated the role of Scotty Moore in Heartbreak Hotel and has been with the show since 2014 and its first run in Hollywood.

MATT MCKENZIE (Sam Phillips): Matt McKenzie debuted on Broadway in Monday After the Miracle with Jane Alexander, directed by Arthur Penn. He’s played leading roles at major theatres across the country including the role of Marvin in Baby It’s You at the Pasadena Playhouse. In the Academy Award winning film “Gods and Monsters”, he played Colin Clive opposite Sir Ian McKellan. Television appearances include recurring roles on; “24”, “Veronica Mars”, and “Mad Men”. His voice-over performances in feature films include; “Final Fantasy”, “Princess Mononoke”, and “Vampire Hunter D: Bloodlust”. Matt is a graduate of the University of Notre Dame and the Advanced Actor Training Program at San Francisco’s American Conservatory Theatre.

ZACH LENTINO (Bill Black): Zach Lentino is thrilled to portray the stories of some of the individuals that inspired him as a musician. Previously seen: Million Dollar Quartet at the Apollo Theatre (Chicago) and the Paramount Theatre (Aurora). He can also be seen performing with his own rockabilly band, “Lance Lipinsky and the Lovers.”

JAMIE PITTLE (DJ Fontana/Drums): Jamie is humbled to be making his Chicago debut in Heartbreak Hotel after originating the role of DJ in the world premiere at the Ogunquit Playhouse. Off-Broadway: Missed Connections. Regional: Heartbreak Hotel, Million Dollar Quartet, The Buddy Holly Story.

ANDREA COLLIER (Sally Wilbourn & Others): Andrea is ecstatic to be a part of Heartbreak Hotel! Some favorite credits include: 42nd Street, Rock of Ages, Hairspray, Gypsy, All Shook Up, Legally Blonde, A Christmas Carol, and The Wedding Singer. Graduate of the University of Illinois!

BRIANA BOWER (Understudy): Briana is beyond excited to be a part of her first show here in Chicago. The Michigan native and EMU Theatre alumna wants to thank her family for their constant love & support.

Individual tickets for HEARTBREAK HOTEL at the Broadway Playhouse at Water Tower Place (175 E. Chestnut) are now on sale and range from $35-$75 with a select number of premium seats. Tickets are available now for groups of 10 or more by calling Broadway In Chicago Group Sales at (312) 977-1710 or emailing GroupSales@BroadwayInChicago.com.  For more information, visit www.BroadwayInChicago.com.

ABOUT BROADWAY IN CHICAGO
Broadway In Chicago was created in July 2000 and over the past 17 years has grown to be one of the largest commercial touring homes in the country.  A Nederlander Presentation, Broadway In Chicago lights up the Chicago Theater District entertaining over 1.7 million people annually in five theatres. Broadway In Chicago presents a full range of entertainment, including musicals and plays, on the stages of five of the finest theatres in Chicago’s Loop including the Cadillac Palace Theatre, CIBC Theatre, Oriental Theatre, and just off the Magnificent Mile, the Broadway Playhouse at Water Tower Place and presenting Broadway shows at The Auditorium Theatre of Roosevelt University. For more information, visit www.BroadwayInChicago.com. Facebook @BroadwayInChicago ● Twitter @broadwaychicago ● Instagram @broadwayinchicago ● #broadwayinchicago