Broadway In Chicago Announces Chicago Premiere of “FOR THE RECORD Presents DEAR JOHN HUGHES” Individual Tix on Sale Jan. 7 @ 10am 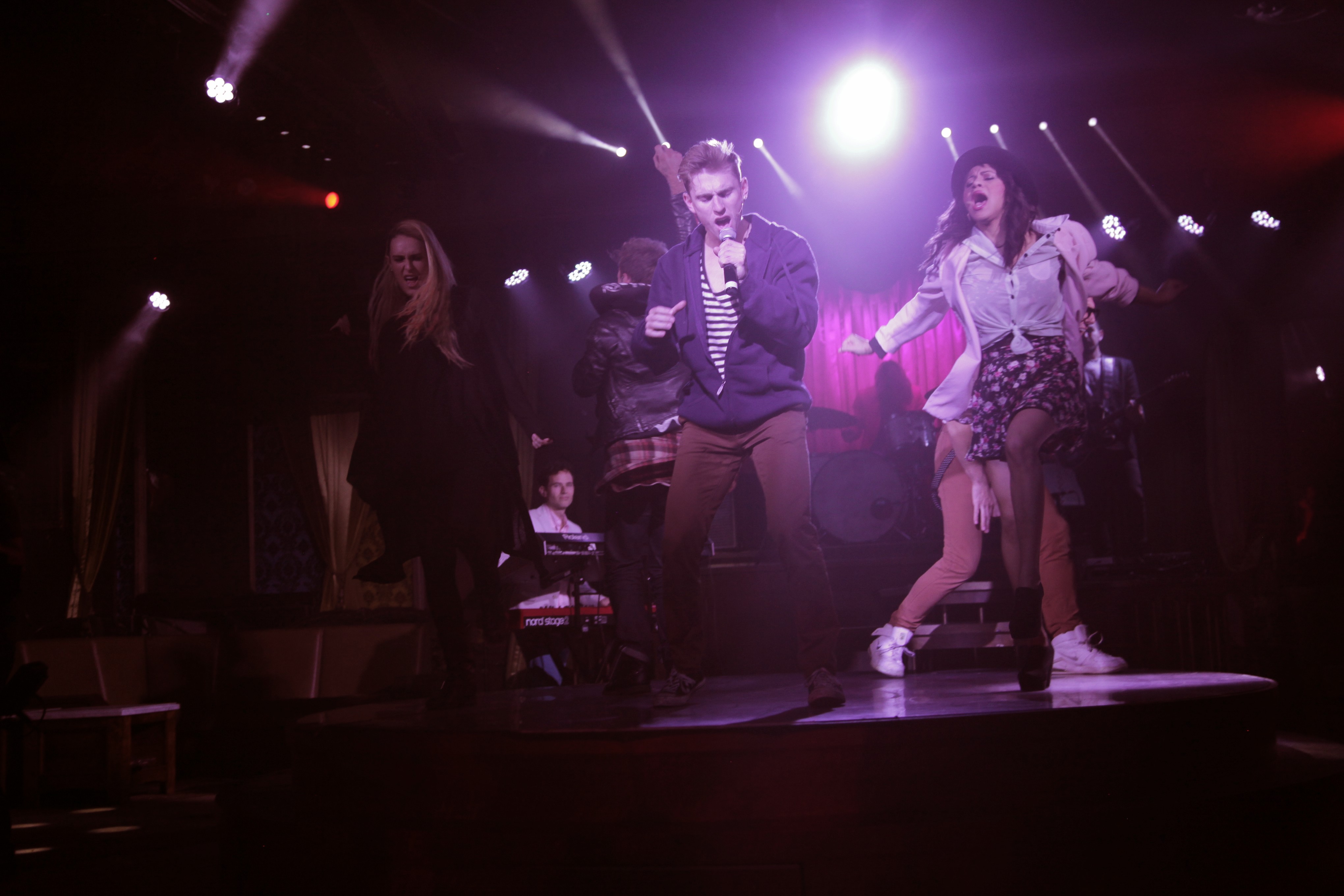 Broadway In Chicago is thrilled to announce “FOR THE RECORD: DEAR JOHN HUGHES,” an immersive, concert event showcasing the works of beloved Chicago native John Hughes, will play the Broadway Playhouse at Water Tower Place (175 E. Chestnut) for a limited engagement March 5 – March 15, 2015.  Individual tickets go on-sale to the public on Wednesday, January 7, 2015 at 10 AM.  The hit Los Angeles FOR THE RECORD series breathes a new life into the movies by adapting the works and movie soundtracks of iconic directors into a theatrical concert setting. “For The Record: Dear John Hughes” includes acclaimed coming of age 1980’s teen films Sixteen Candles, The Breakfast Club, Weird Science, Pretty In Pink, Some Kind of Wonderful and Ferris Bueller’s Day Off.

2015 marks the 30th anniversary of the release of The Breakfast Club, the John Hughes classic which epitomizes one of the most influential pop cultural contributions of our time and changed the way many young people looked at everything from class to friendship, love to sex and fashion to music.  These themes are explored throughout “For The Record Presents Dear John Hughes” by this ‘brat pack’ for the modern age that includes leading talent from stage, the recording world and screen as well as rising stars – all embodying iconic movie characters and giving them new musical voices.  The immersive concert mash-up, where iconic music and moments from the John Hughes’ movies spring to life with an epic new wave inspired soundtrack, includes songs such as Don’t You Forget About Me, We Are Not Alone, If You Leave, Pretty In Pink, If You Were Here, True as well as classic moments like Danke Shoen, Twist And Shout, Try A Little Tenderness and many more.

As a series, FOR THE RECORD has been featured on CBS, NBC, FOX, ABC, Entertainment Weekly and Access Hollywood.  Vanity Fair describes FOR THE RECORD as “a postmodern cabaret that is taking the city by storm.” The London Times called the series “entrancing, funny, over the top, sexy, and brilliantly performed.” Vice proclaimed, “Dayamn girl!” and Elle describes the show as “a spectacle of music and dancing!”

Individual tickets at the Broadway Playhouse at Water Tower Place range from $32 – $79. A select number of premium seats are also available for many performances. Tickets are available now for groups of 10 or more by calling Broadway In Chicago Group Sales at (312) 977-1710.  Tickets are available at all Broadway In Chicago Box Offices (24 W. Randolph St., 151 W. Randolph St., 18 W. Monroe St. and 175 E. Chestnut), the Broadway In Chicago Ticket Line at (800) 775-2000, all Ticketmaster retail locations and online at www.BroadwayInChicago.com. For more information, visit www.BroadwayInChicago.com.

JAMES BYOUS is native to California and a recent darling of the LA music scene.  With no formal music training, James has managed to carve his name into the collective conscience with nothing more than instinct and intuition. An enigmatic and energetic performer as well as a prolific songwriter, James is the quintessential rock and roll frontman.  With his debut solo album Broken Ghost (2013) James showcased a provocative brand of soulful alternative americana and painted a raw and vulnerable portrait of himself, garnering respect and radio airplay in Los Angeles on stations such as KCRW. This performance of For The Record: Dear John Hughes marks James’ fifth show with For The Record Live.

JOANNA A. JONES is honored to be performing the iconic Princess role in For the Record: Dear John Hughes.  She has most recently appeared as Bianca in Kiss Me Kate at The Pasadena Playhouse and as Daisy in For the Record: Baz at DBA.  Some other theatrical credits include Hair (Hollywood Bowl), Thriller Live (West End, London), Parade (3-D Theatricals), Show Boat and Sugar (Sacramento Music Circus), Caroline, or Changeand Hairspray (PCPA Theaterfest).  She also competed as a finalist on NBC’s reality series “The Sing-Off” (Season 2) and NBC’s “The Winner Is.” Joanna received her Bachelor’s Degree in Musical Theater from The University of California, Los Angeles.

PAYSON LEWIS is honored to be a part of the dynamic cast of For The Record: Dear John Hughes.  Originally from Philadelphia, Payson’s TV credits include: “Revenge” (ABC), “How I Met Your Mother” (CBS), “Rules of Engagement” (CBS), “Love Bites” (NBC), “VicTORIous” (Nickelodeon) and was a Top-4 Finalist on “The Sing-Off” (NBC).  In addition to other recent TV appearances, he’s been seen in Glory|Struck Productions’ “Bare” as Peter (BroadwayWorld Award Winner: Best Leading Actor in a Musical), as Butch in “FTR: Tarantino,” Rocky Horror in “The Rocky Horror Show” and as Marty McFly in “FTR: Zemeckis.”  Payson graduated cum laude from the University of Southern California.  YouTube: www.youtube.com/paysonlewis, Twitter and Instagram: @paysonlewis

RUBY LEWIS spent 2014 touring as Scaramouche in Queen & Ben Elton’s We Will Rock You. This was her fourth National Tour, following Gypsy, Grease and Jersey Boys.  Based in LA, Ruby has amassed a number of television credits, including costars on “Medium”, “Brothers & Sisters”, “Hart of Dixie” and “Rules of Engagement”, a recurring role on “Desperate Housewives” and a guest star role on Showtime’s hit drama “Masters of Sex.”  “Dear John Hughes” will be her sixth show with For The Record Live.  www.rubylewis.com @rubylewla

CIARÁN McCARTHY is thrilled to return to the latest installment of For The Record: Dear John Hughes. This marks his fourth show in the “FTR” series, having recently completed successful runs of “Zemeckis”, “Baz”, and “Tarantino”.  Some of his favorite theatre credits include: The Wedding Singer (1st National Tour), Hello! My Baby (Rubicon Theatre), 9 to 5 (3-D Theatricals), A Christmas Memory Musical (Laguna Playhouse), The Wedding Singer (MTW), Plaid Tidings (Laguna Playhouse), Justin Love (Celebration Theatre), High Fidelity (MTG), A Christmas Carol (Studio Tenn), Rent and Jesus Christ Superstar. TV/Film credits include:  “Henry May Long”, and “American Country Awards” (FOX).  Ciarán is the host of a new food and travel show called “Hot, Hip, and Hungry”.  He also co-choreographed and stars in Josh Turner’s hit music video “Why Don’t We Just Dance”. Ciarán would like to thank Shane, Anderson, Chris and everyone in the “FTR family” for this opportunity. www.ciaranmccarthy.com @ciaranjmccarthy

PATRICK MULVEY is a Chicago native.  He studied acting at The Royal Scottish Academy of Music and Drama. His television credits include “Chicago Fire,” “The Mob Doctor,””CSI-NY,” “NCIS,””Detriot 187,” and BBC Drama River City.  Theatre credits include Billy Elliot on Broadway, Rock N Roll (Goodman Theatre) and the National Theatre of Scotland production of Something Wicked This Way Comes. Check out his new web series Pat and Andy at bliptv.com or patandandy.com.