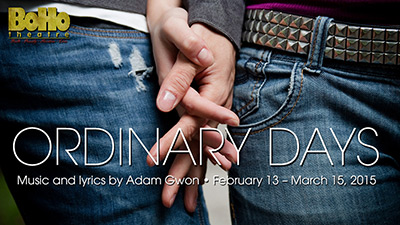 BoHo Theatre opens its 11th season with the first Chicago production of the musical ORDINARY DAYS by Adam Gwon, directed by Jason A. Fleece with music direction by Ilana Atkins. Named one of “50 to Watch” by The Dramatist magazine and hailed “a promising newcomer to our talent-hungry musical theater” by The New York Times, Adam Gwon is one of musical theatre’s fast-rising stars. With a charming and character-driven score, ORDINARY DAYS tells the story of four ordinary people discovering that if you dig beneath the surface, you can find the extraordinary.

TICKETS
Tickets are available now online at www.BoHoTheatre.com or (866) 811-4111.
Tickets are $20, with discounts available for seniors and students.

CHICAGO THEATRE WEEK
BoHo Theatre is proud to be part of Chicago Theatre Week, held February 12-22. Returning for the third year, Chicago Theatre Week 2015 will include specially-priced tickets to 100 shows. Visitors and city residents will again have the opportunity to sample the extraordinary range of theatrical offerings throughout Chicagoland. Special discount tickets for ORDINARY DAYS and other participating shows are listed on a centralized website: www.ChicagoTheatreWeek.com. Chicago Theatre Week is presented by the League of Chicago Theatres and sponsored by Choose Chicago, Exelon, Dana Hotel and Spa, and ACME Hotel Company.

THE PLAY
From one of musical theatre’s most exciting new composers comes ORDINARY DAYS, a refreshingly honest and funny musical about making real connections in the city that never sleeps. When cynical grad student Deb loses her most precious possession— the notes to her thesis— she unwittingly starts a chain of events that leads to four New Yorkers discovering that their dreams, their passions, and their struggles are anything but ordinary. Told through a series of intricately connected songs and vignettes, ORDINARY DAYS is an original musical for anyone who’s ever struggled to find meaningful connections in a city that seems overwhelming.

THE PRODUCTION
True to BoHo Theatre’s Bohemian ideals, this intimate musical is about finding the beauty and the extraordinary in the everyday. Beneath the surface, every person has dreams, passions, and fears that we carry with us but are reluctant to reveal. In a busy city full of people always on the move, it is too easy to see others simply as their outer façade, as stereotypes, or as labels as a way of just getting through the day. Instead of choosing this approach that keeps people at arm’s length, BoHo presents ORDINARY DAYS as an invitation for our community to look deeper at each other, to see the loving, yearning, curious, perhaps frightened person inside each of us, and to realize that we’re not so different after all.

BoHo Theatre’s mission is to create bold theatre that challenges convention through innovative storytelling and unites artist and audience in the examination of Truth, Beauty, Freedom and Love through the lens of human relationships. Its vision is to create a shared community of artists and patrons in which all members are moved through art to make thoughtful, well-examined, caring relationships the highest priority in their lives.