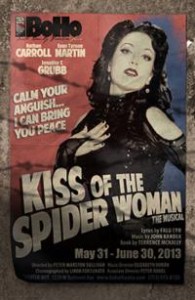 Condemned to a brutal Latin American prison for the crime of homosexuality, Luis Molina has learned to escape the humiliation and torture of his surroundings with an elaborate fantasy world. His fantasies recall the glamorous diva Aurora from the movies of his youth. But his ability to escape reality is tested by his new cellmate, a Marxist revolutionary named Valentin. For despite falling in love with Valentin, Molina has been co-opted by the prison warden and the secret police to get information out of his cellmate in exchange for early parole. Can Molina’s fantastical tales of Aurora and her Spider Woman character help him navigate the dangerous events of the real world?

Kiss of the Spider Woman won the Tony Awards for Best Musical, Best Book, and Best Score when it debuted on Broadway, as well as a Drama Desk Award for Outstanding Musical. A harrowing tale of torture and political oppression, this musical nonetheless embraces hope and the beauty of love.

Kiss of the Spider Woman will be presented “in the round” in Theater Wit’s intimate Theater 3 space, bringing a unique sense of immediacy and realism to the story. The production will feature an immersive set by BoHo Artistic Affiliate Patrick Ham that will bring to life the squalor of the prison by surrounding both the actors and the audience. “For me, the concept of reality versus fantasy is very important in this show,” says director Peter Marston Sullivan. “How do we change our own surroundings based on our imaginations and the things we love?”

To convey this vision, Sullivan has assembled an impressive ensemble of artists for this production. Nathan Carroll and Evan Tyrone Martin have previously been seen in BoHo’s smash hit Floyd Collins, while Jennifer Grubb, recently seen in Diamate Productions’ Cold Cold Feet and Light Opera Works‘ The Secret Garden, won raves in BoHo’s production of Bernarda Alba. Elizabeth Doran, whose work includes Court Theatre’s Porgy and Bess, will provide music direction, and the elaborate fantasy dance sequences will be choreographed by Linda Fortunato, whose work has been featured at Drury Lane Oakbrook, Marriott Theatre, and Theatre at the Center. BoHo’s Associate Artistic Director Peter Robel, who is Associate Director of the production, will help bring to life Molina’s intense fantasies through extensive research on the aesthetic and experience of 1940s noir cinema. “Bringing together artists of this caliber and giving them a supportive environment to produce art is what BoHo is all about,” remarks Sullivan. “This show is going to be something special.”

Tickets are available now online at www.BoHoTheatre.com or the Theater Wit box office at (773) 975-8150. Tickets: $25-27, discounts available for seniors and students.

Peter Marston Sullivan (Director)
Peter is the proud Artistic Director of BoHo Theatre and has worked for the Marriott Theatre for over seven years in various capacities, including his current position of Artistic Associate. Peter earned a BA in Theatre and an MA in Teaching at Trinity University in San Antonio, Texas, and an MFA in Directing at Illinois State University. Recent directing projects include Floyd Collins, Pippin, Big River (Jeff Award-nominations for Best Production (Musical) and Best Director), Icarus, I Am My Own Wife (co-director), Ghosts, Playing with Fire, and M. Butterfly at BoHo; Black Comedy at Piccolo Theatre, Monster Garden at the Gorilla Tango Theatre, and Cry Havoc at Bailiwick.