Billy Porter is the Soul of KINKY BOOTS 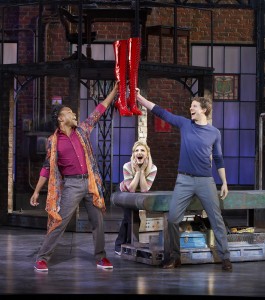 Kinky Boots has arrived and so has the first musical in over fifteen years that will have crossover chart success. This long awaited, much hyped show is based on the 2005 British film about the true story of a second-generation shoe factory owner that turns to making “fetish” footwear in order to save the company from closing its doors. More than that, it is a story about not living up to your father’s expectations and the childhood scars that are carried through adulthood, shaping the person you become.

Chicago audiences are the first to see Kinky Boots, which is now in its pre-Broadway tryout at the Bank of America Theatre and if opening night is any indication by its 5-minute standing ovation, this is a musical with long legs. Producers Daryl Roth and Hal Luftig have put together the perfect creative team for the material at hand with Harvey Fierstein, Cyndi Lauper and Jerry Mitchell as the talent that pours out of these masters of this genre is palpable.

Kinky Boots begins with a young Lola discovering his love of high heels and the instant disapproval of his father; countered by a young Charlie being groomed by his father to go into the family shoe manufacturing business. These two patriarchal relationships are the center of the lead character’s emotional arch. The story unfolds with Charlie (Stark Sands) unexpectedly inheriting the shoe business after his father’s untimely death. The factory is in financial straights and Charlie is forced to fire some workers including Lauren who happens to have a crush on her boss. Lauren tells Charlie to keep a look out for a niche idea that would give the factory a shot at staying open. To this end, Charlie travels to London where he attempts to rescue a “woman” in distress but his efforts are thwarted as he is cold cocked by the person he is trying to save. That person turns out to be Lola (Billy Porter), a drag diva (also known as Simon) who expresses disappointment with her shoes as the high heel keeps snapping off. Lola explains to Charlie that those types of shoes are made for women and not for men. The preverbal light bulb goes off and the niche Lauren spoke of is realized. With Lola as designer, Charlie leads the factory workers to design and produce drag shoes for a big fashion show in Milan. However, things begin to fall apart as Charlie’s girlfriend wants him to sell the company and convert the building to condos; male employees continually harass Lola and Charlie’s stress level rises as his workers being to revolt. By the end, relationships have evolved, prejudices are redressed and two men come to terms with accepting who they are what they have become, regardless of their father’s expectations. 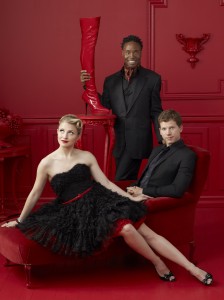 Kinky Boots has something unique going for it that will add to its success; that is Billy Porter. Mr. Porter gives a star-turn, bravura performance as Lola. I would venture to say that Kinky Boots will do for Mr. Porter what Hello, Dolly did for Carol Channing, Funny Girl for Streisand; Phantom for Michael Crawford and Evita for Patti LuPone. This is will become a show and role that will be forever synonymous with Mr. Porter, and rightfully so. Mr. Porter’s charisma, unabashed talent and commanding presence make Lola a defining role of the American musical theater.

Porter moves effortlessly and his energy is infectious. At times his Lola reminds one of a cross between Isabel Sanford and Flip Wilson, but make no mistake, Mr. Porter always is in control and this is a unique and fabulous creation.

Alongside Mr. Porter is the equally engaging Stark Sands as Charlie Price. Though his character could stand a little more development in the second act, Sands has remarkable stage presence and chemistry with his co-star. This show is dependent on the Charlie/Lola relationship and it is within this context that Mr. Sands is perfectly cast. You can sense the camaraderie and trust they have in each other. When Porter and Sands finish singing “I’m Not My Father’s Son” they both gaze in silence at each other, and it is in that moment that the true emotional weight of the song is realized.

The other showstopper of the evening was Annaleigh Ashford (Chicago’s favorite Glinda) who brought down the house as lovelorn Lauren with her homage “The History of Wrong Guys”, which will surely be a pop hit outside of the show. Ms. Ashford’s comedic timing is sprinkled with just the right amount of pathos has she realizes that she falling in love with her boss.

The rest of the ensemble are also stellar, including a mega-talented chorus of drag queens that the two revivals of La Cage and the import Pricilla Queen of the Desert could only hope for; Daniel Stewart Sherman’s Don is great as the factory bully who learns first hand, the power of a right upper cut of a professionally trained prize fighting drag queen.

The book for Kinky Boots is classic Harvey Fierstein, who always has the innate ability to create an environment where his characters can be bigger than life one minute, then intensely internal the next. This was the case in La Cage where over the top Zaza brings down the house with the heart breaking “I Am What I Am”. The same formula is at work here as vivacious creation of Lola is only but a front for the broken alter ego Simon.

Director and Choreographer Jerry Mitchell is right at home with Kinky Boots. The material at hand is perfect fodder for Mr. Mitchell to develop the environment to allow his actors to find their truth. This is not an easy task when you have these types of pre-determined characters. However, Mr. Mitchell digs behind the obvious grandeur to find the nuanced reality of compassion that makes the two lead characters real. He also has created one of the best dance numbers ever seen on stage with the rousing “Everybody Say Yeah” which places the cast, many in high heels, on synchronized conveyer belts. 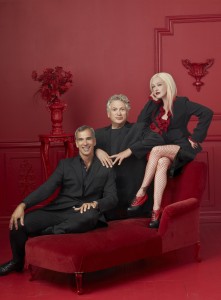 A musical would be nothing without the music, and for this, Cyndi Lauper is a revelation. Her music and lyrics are among the best written of late. Ms. Lauper’s range and style is impressively varied, going from soaring ballads to rousing twelve o’clock numbers; to high energy full out chorus songs reminiscent of her 80’s pop hits. They are all melodic and memorable. Not since Rent has there been a musical that is poised to have at least three numbers cross over to the pop charts. Moreover, Ms. Lauper’s songs are uniquely character driven and her words give the actors singing them a great ability to expand their emotional truth.

Kinky Boots still has some issues to work out prior to its move to Broadway in March. There are some awkward pacing problems, especially at the beginning of the musical. Charlie’s angry dissent in Act II needs to build up a bit more realized as it seems forced and unnatural as written. Finally, the characters of Lauren and Nicola need a little more stage time which would allow a more fully developed arch for the “Charlie” triangle.

That said, few musicals will leave you feeling as elated as Kinky Boots. The message is simple, “Be yourself because everyone else is taken.” Once we do that, I surmise the rest of life is easy. If not, at least we will have Lola to protect us!