The Bride Has It Out For Her Master in KILL VIKTOR: Vol 1 & 2 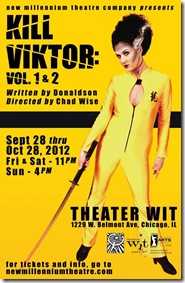 There is a lot to like in New Millennium’s late night production of Kill Viktor Vol. 1 & 2 currently playing at Theater Wit.   More homage than parody, this tactile production merges the two genres of distinct filmmaking into a performance art piece with fantastic stage combat scenes.

Viktor of course is the creator and master of Frankenstein and his lovely Bride.  Originally created by Mary Shelly as a series of epistles, the creature and old wifey-poo gained  fame through the films of James Whale (and again with Mel Brooks).  Kill Bill Vol 1 & 2 is classic Quentin Tarantino where a bride, who is actually and assassin, seeks vengeance on those who murdered members of her wedding party.    Mash them up and you have a hilarious and smart Kill Viktor Vol. 1 & 2, with a book by Donadlson and swiftly directed by Chad Wise.

In this version we have a very perturbed pregnant Bride (an agile Amee Binder) who has mastered Shaolin Kung Fu and sets out for revenge for her creator and his minions after being left for dead.   The best moment of the play comes in the form of a fantastic parody of Everybody Loves Raymond (Everybody Loves Vampira) in which the actors do some fantastic character work and also includes a lovely tribute to the late Peter Boyle who will always be remembered for his hilarious “Putting On The Ritz” in Mel Brook’s Young Frankenstein.

As in the original novel and other incarnations, the core of Frankenstein always has to do with the notion of creation, and Kill Viktor explores this is very original ways. In the home of Viktor (played by the sensational Beau Forbes), we are introduced to his child B.B. (Kayla Stypinski who has great presence and likability in her stage debut).   Through this introduction, we see that his love for manipulating God’s creation controls his life and it is in this realization that Kill Viktor is more than a parody piece but also can be viewed as a axiom for modern science.

Kill Viktor Vol. 1 & 2 can surely use some rewrites but on the whole, this is a fun and entertaining late night venture with some great action and acting.