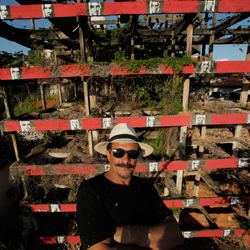 Known as “The People’s Picasso,” for 35 years Bel Borba has transformed the face of his hometown of Salvador de Bahia, Brazil  – a historic city that is 500-years-old – with beautiful, grand scale and awe-inspiring art including sculpture, painting, murals and mosaic.  Working with tiles, steel, sand, clay, and an eclectic mélange of recycled material including Coca Cola bottles and wood from Salvador’s famed Savaro boats, Borba’s ubiquitous public works reflect his feverishly ebullient personality and unbridled love of community.  With an evocative Brazilian soundtrack and lush cinematography that exposes the lavish colors of Salvador, BEL BORBA AQUI explores the intense and intimate relationship between this unique city – a fusion of European, African, and Native Indian cultures – and her beloved native son.

The work of Bel Borba, Brazil’s best-kept cultural secret and national treasure, was on view to the public in New York City in October in DIÁRIO (através de um OLHO BAIANO), a month-long series of urban artworks.  Spanning diverse locations throughout New York City, from Central Park to Roosevelt Island to Jackson Heights, DIÁRIO was presented as part of the annual Crossing the Line fall festival of the French Institute Alliance Française (FIAF), in partnership with the Hemispheric Institute of Performance & Politics. Each day, Borba created a new ephemeral artwork, using recycled and found materials, in a different location in the city, accompanied and illuminated by the video work of filmmaker-photographers Burt Sun and André Costantini.  For information and to view photography and video from the exhibit, visit diariobaiano.wordpress.com

Also on view in Times Square this fall was the new, site-specific work Universal Pulsecreated by Bel Borba, along with acclaimed filmmakers Burt Sun and André Costantini. This presentation was a part of Times Square Moment: A Digital Gallery—the largest coordinated effort in history by the sign operators in Times Square to display synchronized, cutting-edge creative content at the same time every day. The piece was the first in the program’s history to be created specifically for use on the Times Square screens.