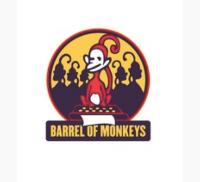 Barrel of Monkeys moves its clever, witty and poignant “That’s Weird, Grandma” to Sundays at 2 p.m. February 3 through May 5 at the Neo-Futurarium, 5153 N. Ashland. There is no performance on Sunday, March 3. Barrel of Monkeys resumes regular Monday night performances on March 11 at 8 p.m. in conjunction with the matinees. Artistic Director Molly Brennan directs the matinees.

After teaching creative writing residencies at Chicago Public Schools and working with 3rd through 5th grade students to generate literally thousands of creative stories, Barrel of Monkeys adapts students’ stories for the stage and share them through “That’s Weird, Grandma” each week. Barrel of Monkeys’ matinee performances of “That’s Weird, Grandma” feature all the originality of the evening performances. Some matinee sketches include “Free Bird”, an a capella song of a pet bird’s journey outside the home; “Little Princess and Mom”, a three-part tale of a royal family’s new puppy; “It Hurts”, an unrequited love song; and “1000”, a live action video game adventure.

A Chicago-based arts education theater ensemble, Barrel of Monkeys increases students’ writing skills and confidence by offering residencies with a unique hybrid of creative writing and drama activities coupled with professional performance for students from underserved Chicago Public Schools. Student-written stories are adapted into professionally-performed theater presented both in-school and through performances for the general public. Barrel of Monkeys performs more than 300 student-written stories for the students in their schools and more than 175 stories on the stage for the public each year.

Brennan, a Barrel of Monkeys company member since 1999, has held a variety of positions in the company, including actor, teacher, lead teacher, director, and artistic associate. She was named artistic director in 2011. Brennan is also a Company Member of 500 Clown, and has performed in Chicago and toured all over the country. Her acting credits include: Lookingglass Theatre’s “Peter Pan, A Play” and “Lookingglass Alice”; and Harpo Marx in Goodman Theatre’s “Animal Crackers”. She has also performed with About Face, Steppenwolf, Second City, The House Theatre of Chicago, Lifeline and Factory Theater.

For tickets, reservations or information call 312-409-1954 or visit www.barrelofmonkeys.org.