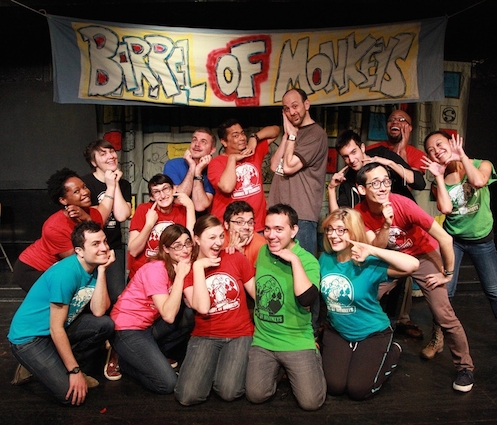 Just when you thought Monday nights couldn’t get any better, Barrel of Monkeys is partnering with some of Chicago’s best performing arts companies and artists for its third iteration of CHICAGO’S WEIRD, GRANDMA, directed by Artistic Director Molly Brennan, playing Mondays at 8 pm from October 27 – December 1, 2014 at the Neo-Futurist Theater, 5153 N. Ashland Ave. in Chicago.  Each week, a different guest artist or company will bring their unique talents to transform stories written by Chicago Public School students into entertaining sketches incorporating puppetry, sketch comedy, clowning, music, dance and other disciplines. For tickets, reservations and information visit www.barrelofmonkeys.org or call (312) 409-1954.

This year’s guest line-up will be announced shortly. Each guest artist or company will choose from original stories from Barrel of Monkeys’ in-school residencies and adapt them into unique performances. Barrel of Monkeys ensemble members will round out each performance with a rotating line-up of sketches from their long-running revue, THAT’S WEIRD, GRANDMA. Clever and funny – touching and poignant – the collection of short sketches are equally entertaining for adults and children. The line-up changes each week by audience vote, so no two shows are ever the same. Past guest companies and artists include About Face Theatre, Bailiwick Chicago Theater, Jessica Hudson, The Hypocrites, Jyldo, Lookingglass Theatre, Manual Cinema, The Neo-Futurists, Noah Ginex Puppet Company, Steppenwolf Theatre and others.

Adapted for the stage by and featuring: Barrel of Monkeys Company Members and weekly guest companies/artists (to be announced).

Molly Brennan, a Barrel of Monkeys company member since 1999, has held a variety of positions in the company, including actor, teacher, lead teacher, director and artistic associate. She was named Artistic Director in 2011. Brennan is also a Company Member of 500 Clown, and has performed in Chicago and toured all over the country. Her recent acting credits include: American Mixtape at Second City, The Life and Death of Madam Barker at Red Tape Theatre, Second City’s Guide to the Opera at Lyric, Lookingglass Theatre’s Peter Pan, A Play and Lookingglass Alice; and Harpo Marx in Goodman Theatre’s Animal Crackers. She has also performed with About Face Theatre, Steppenwolf Theatre, The House Theatre of Chicago, Lifeline Theatre and Factory Theater.