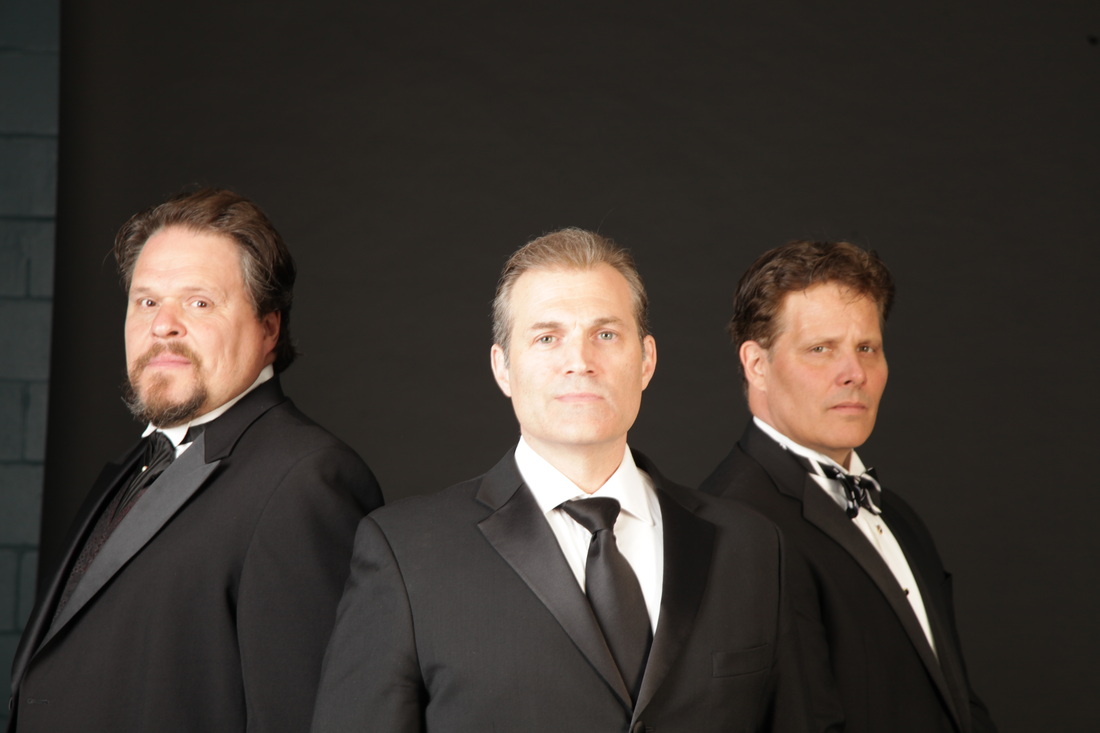 As a singer you learn to appreciate many varieties of music. I have been singing for various choirs and music groups for many years, and I greatly appreciate the different vocal ranges. Most of the time, you only hear about famous Sopranos or Tenors such as; Maria Callas, Renee Fleming, Luciano Pavarotti, or Andrea Bocelli. You rarely see Altos or Baritones given such acclaim. I am happy to say that this thinking has changed with the times and the production of Baritones Un Bound at the Royal George Theatre.

Baritones Un Bound features three baritones; Nathan Gunn, Mark Delavan, and Marc Kudisch.   Marc Kudisch is the moderator for most of the evening. Joined by Delavan and Gunn, Kudisch takes a walk through history telling the story of the creation of the Baritone. Kudisch explains, “A Soprano sings to the heavens, Basses sing more earthly, and the Baritone sings between heaven and earth.” The history lesson begins with the Gregorian chant and moves through the years with the various composers and operas beginning with Mozart’s The Magic Flute’s Papageno, moving to Verdi, Puccini, and Wagner. The trio is featured individually and together performing the early forms of music with vocal skill and great talent. All the while, using the stage and the various props located around the stage to make their point. My favorite selections were from The Barber of Seville, and The Marriage of Figaro. Each singer performed these selections with great beauty, style and ease. Continuing through history, Kudisch further explains that the featured baritone moved from opera to operetta with Gilbert and Sullivan, then onto the musical theater with selections from Jerome Kern’s Showboat and later with Rogers and Hammerstein’s Oklahoma, Carousel, and many more. During the second act, the trio looked at individual popular baritones such as, Frank Sinatra, Howard Keel, and Gordon McCrea and later with Elvis Presley.

Baritones Un Bound creates an enjoyable musical experience for the music lover who enjoys many styles of music. If you are not an opera lover you may not enjoy the first act quite as much.   However, by the standing ovation Kudish, Delavan and Gunn received, I don’t believe it is a concern.

Marc Kudisch, who is no stranger to Broadway and musical theater, is a three time Tony award nominee. Baritones Un Bound is co-produced and co-written, and performed with Marc Kudisch. It is also co-created and co-written with Broadway veteran, Merwin Foard, and Metropolitan Opera star Jeff Mattsey. This collaboration is successful by highlighting the history of the Baritone, and it works! The writing is interesting, and Kudisch’s versatility is outstanding.   Mark Kudisch is joined by baritone, Marc Delavan. Delavan’s credits consist of many operas along with musical theater performances. Delavan’s performance in Baritones UnBound featured Delavan singing selections from the Barber of Seville, the Marriage of Figaro, and the title song from Sweeney Todd. These selections were the highlights of Delavan’s performance. Last but not least, baritone, Nathan Gunn who has mastered many opera performances, Gunn is not known for Broadway musical theater. However, Gunn’s romantic tone does not disappoint while singing opera arias or selections from Broadway musical theater like “Oh What a Beautiful Morning”, from Oklahoma. Gunn’s style is as easy to observe, and easy to listen to while hearing the tone of his voice. One of my favorite moments was hearing Mark Delavan sing the Elvis hit Love Me Tender, while Nathan Gunn sang O Sole Mio. It is very enjoyable and it is a perfect arrangement!

I would be remiss if I did not mention the music direction of Timothy Splain. Splain’s musical versatility and talent playing the various musical arrangements moved from opera, to musical theater, to pop with great ease. Timothy Splain looks too young to be so extremely talented. Splain is amazing to watch and his musical ability is very pleasing to the ear.

Director, David Dower did a beautiful job in staging Baritones Un Bound. The 2 hour and 15 minute performance moved rapidly and was very interesting. The sets and props added to the performance. I like that Dower added a bucket of bottles with libations for the singers. It helped the singers clear their throats, as well as creating a laid back approach to their story.

Baritones Un Bound is extremely enjoyable and I highly recommend it. As I mentioned earlier, as a singer I really appreciate the talent and the versatility along with the history. As an audience member, it creates a wonderful theater experience. Don’t Miss it!