An Intimate Evening with Lynda Carter Is Cabaret Paradise

There is a certain irony of spending the evening of the sixth anniversary of September 11th with a person who portrayed a heroine that stood for peace and love at a time of war.Yet it happened. Last night, we had the privilege of being protected and entertained by Wonder Woman. And what an evening it was.

Billed as “An Intimate Evening with Lynda Carter” the woman who spun her way onto the scene and into our collective memory as the Amazonian Princess in the 1970’s series and into television history brings one of the best and most well rounded cabaret acts ever staged to the Apollo Theatre for a week of shows. To miss this would be to miss what true cabaret is meant to be. From a stunning rendition of Billy Holiday’s “God Bless The Child” to two sultry medleys from her Emmy winning CBS specials, Ms. Carter was charming, captivating, comfortable and vocally in control of every note. Intertwined in the songs was a glimpse into her musical influences, most importantly being her mother. 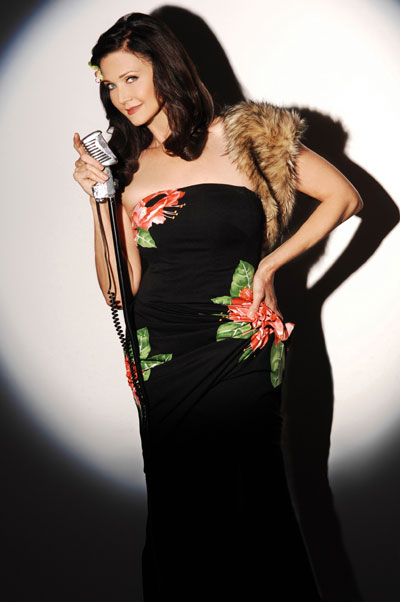 One of the many highlights was her rendition of “Put The Blame On Mame” which was from a Rita Hayworth film entitled Gilda. Ms. Carter won rave reviews for her portrayal of the “Love Goddess” in a 1983 biopic. Anyone who knows the history of Rita Hayworth was also sure to find a beautiful song entitled “Where’ve You Been” extremely moving which detailed a woman’s fate brought on by Alzheimer’s, a disease which finally took the life of Hayworth. Carter also had all eyes focused on her husband for the heartfelt “Always”. As several of us noted to each other after the performance, at certain times you close your eyes and almost swear that Ms. Carter was channelling Karen Carpenter. There vocal intonations were that close to each other.

Ms. Carter has always been driven by music. From her childhood growing up in Phoenix where she sang with various rock bands, (Gary Burgoff from M.A.S.H was her drummer) to her star turn as Mama Morton in the London cast of Chicago, which I had the privilege to see, it is her musical talents that have kept Ms. Carter in the spotlight for four decades. Ms. Carter has a new C.D. which will be released in the near future and can currently be heard on the 10th Anniversary recording of Chicago.

Lynda Carter is much more than just a 70’s icon. She is one of the greatest singers and performers on the scene today. Get yourself out from under and see a Wonder. It is the most satisfying intimate evening you will ever have without having to worry about who you will wake up next to in the morning.

An Intimate Evening With Lynda Carter plays to September 16 at the Apollo Theatre, 2540 N. Lincoln Ave., Chicago. For tickets call the box office at (773) 935-6100 or via Ticketmaster.